With Luke Cage recently debuting its first season on Netflix, Netflix and Marvel have wasted no time in confirming when we can expect the Marvel Cinematic Universe’s next contribution to the world’s biggest streaming platform. With Iron Fist being next on the docket to lead into next year’s crossover miniseries, The Defenders, Marvel and Netflix released a brief 12-second teaser video on YouTube that confirms Iron Fist’s first season will hit Netflix on March 17th, 2017. This remains true to Netflix’s current pattern of Marvel series releases, which are generally around six months apart at this point, and consequently, this premiere date means that Iron Fist will debut exactly one year after the second season of Daredevil released during this year. 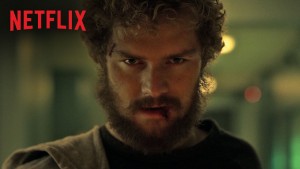 Speaking of the second season of Daredevil, another announcement was made by Marvel and Netflix regarding the Punisher series that spun off from it, namely that it has now begun filming, despite most of the show’s cast not being announced at this point. Jon Bernthal will reprise his role as Frank Castle/The Punisher, the deadly vigilante that terrorized Hell’s Kitchen during the events of Daredevil’s second season, with Ben Barnes also being cast in the series in a prominent role, rumoured to be a key villain. Scott Lightfoot will serve as Punisher’s showrunner, as well as the writer of the first two episodes. Beyond that however, little is known about Punisher, which makes its filming start fairly surprising. Netflix COO, Ted Sarandos previously claimed that Punisher will target a 2018 release for its first season, following The Defenders in 2017, though Sarandos also claimed on another occasion that Netflix wants to reduce downtime between their Marvel shows, so Punisher may share a year with two other Marvel seasons, rather than just one.

Iron Fist, meanwhile, is the fourth and final Marvel series planned for Netflix that will lay the foundation for crossover Netflix miniseries, The Defenders, also planned to premiere in 2017, following Daredevil, Jessica Jones and Luke Cage. Finn Jones stars as the title character, Danny Rand/Iron Fist, a billionaire coming back to New York after being lost for many years, rediscovering his family legacy, and fighting against criminals with his martial arts mastery, further empowered by using the mighty power of the Iron Fist.

Neither Marvel nor Netflix confirmed any news regarding a potential second season for Luke Cage, though our recent review of the first season gave it a positive 85% overall score. We praised the series’ style, lead character and performances, even if we also took issue with some shaky story elements later in the season especially.

Keep leaping to Eggplante for all major news and updates on Iron Fist, Punisher, and other television projects for the Marvel Cinematic Universe.