The Big Bang Theory sadly suffered another off-week in, “The Dependence Transcendence” this week, having a satisfying final result in its latest episode that sadly meant slogging through a lot of flimsy filler material beforehand. The humour in this episode was disappointingly uninspired and forced for too much of the runtime, and even if at least one of the three plots finally addresses a nagging issue that’s been especially evident in Season Ten so far, another plot frustratingly sweeps a pressing conflict under the rug in a rather lazy fashion.

The episode’s main storyline revolves around Sheldon, Leonard and Howard predictably struggling to meet the absurd deadline that Sheldon set for them in the previous episode. Sheldon finds that he has a hard time staying awake, though Leonard and Howard urge him to soldier on. This leads to Sheldon having a funny, if non-sensical dream sequence where The Flash appears to him and points out that Sheldon can drink energy drinks. How Sheldon had a dream this potent about a substance that he has a strong aversion to is anyone’s guess, but whatever, that’s how the story gets going, and the dream itself is really funny, in spite of how little sense it makes. 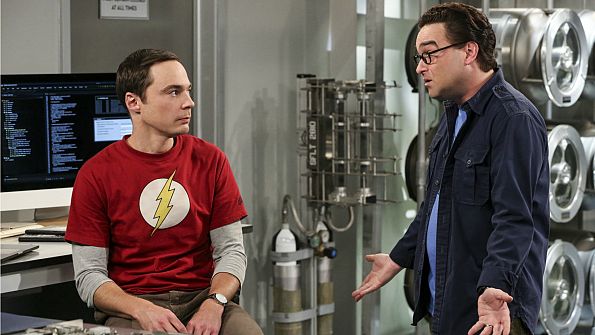 So, Sheldon drinks an energy drink and outputs incredibly well for a bit, but after coming down with a hangover immediately afterward, he laments his actions, and immediately believes that he has a caffeine addiction. Obviously, this is ridiculous, especially when Sheldon refuses to buy himself any more energy drinks, though at least the humour was passable here. The show did fall back on the typical, “Sheldon is annoying” schtick a bit too heavily though, to the point where it seemed like Sheldon was unrealistically getting in Leonard’s and Howard’s way within a field where he’s constantly trying to show them up.

That said though, the final result of this storyline was worth it, mostly, when Sheldon finally comes out and admits that the reason why he has been nagging Leonard and Howard about a non-existent problem so much, is because he is stumped on the math regarding the guys’ invention. Sheldon is forced to confront the fact that he’s not infinitely intelligent, and not capable of perfectly solving any problem, which should be a huge moment for his character. That’s why it’s very frustrating that the show downplays it so much, and uses it as a means to an end to have the guys ask Colonel Williams for a two-year extension on their military contract… And Williams just gives it to them. Oh, come on! That’s it? Granted, the joke about government contracts never being on time was kind of funny, but this doesn’t make sense, considering that CalTech got the contract because of Sheldon’s unrealistic timeline declaration, beating out an MIT team. Why is Williams all of a sudden fine with the guys extending their timeline by two whole years? It just feels like a lazy way for the show to get out of the corner it clearly wrote itself into.

What was arguably the most entertaining storyline, albeit the one with the least bearing on the show’s overall canon, was Amy and Penny attending a geology party together, which no one shows up to. The awkward host of the party is the girls’ only company, which starts out uncomfortable, but later leads to an amusing confession that Amy is viewed as the popular woman on campus by CalTech’s science division. Seeing a second-hand account of what some of the other scientists think of Sheldon and Leonard is fairly funny, and the reactions by Amy and Penny also got some of the episode’s better laughs, beyond that surprisingly amusing Flash dream of Sheldon’s. It’s too bad that this plot couldn’t have better worked itself into the show’s over-arching events, because this was the one story arc that actually did feel pretty satisfactory this week.

Once again though, we also have to suffer through an extra bitchy Bernadette, who is currently taking her frustrations out on Raj. I feel like the showrunners began to notice that Bernadette was becoming too unlikable here, so they tried to explain her nasty behaviour in several ways that just kind of fell flat, honestly. There’s just no excusing her behaviour lately, even when Raj tries to claim that she was always mean even before she was pregnant. No, she wasn’t, not like this. At the very least, the way this storyline ended off wasn’t bad, with Raj calling his father to explain to Bernadette that it’s alright not to be excited about her child, since she will love it when it comes, but again, rather than Bernadette suffering consequences and learning from them, she’s just coddled and pitied again. It’s not bad to know that Bernadette is legitimately struggling and wanting to be a better person, but the show just isn’t doing enough to convey that for now, instead exploiting her temper for cheap giggles, as if it doesn’t know what else to do with Bernadette anymore.

Season Ten of The Big Bang Theory is taking a bit of extra time to get off the ground by the look of things, though there’s still time for the season to find its footing. For the most part though, “The Dependence Transcendence” was an unwelcome reminder of this show’s advanced age, since its weak gags and clumsy storytelling were a real hassle, even within an episode that did have a good end goal in mind for at least two of the three plotlines. The deadline issue being swept away so easily feels cheap and unsatisfying, and possibly happened because CBS is now fairly confident that they can squeeze at least one more season out of this aging sitcom, but either way, the show needs to step it up a notch if it wants to keep defying said age. So far, several ongoing story elements of this season just aren’t really working that well.

The Big Bang Theory 10.3: "The Dependence Transcendence" Review
The Big Bang Theory struggles again this week, with a disappointingly weak episode that offers at least one amusing subplot, but mostly serves as a way to push the show out of a corner.
THE GOOD STUFF
THE NOT-SO-GOOD STUFF
2016-10-04
68%Overall Score
Reader Rating: (1 Vote)
50%