Arrow’s fourth season frustratingly ended on a very clumsy note, and a lot of that was due to the show’s misguided attempts to add more fantastical elements like magic and demonology. Season Five seems to want to do away with that and go back to the show’s roots, namely it being a dark, hardened street drama about a violent vigilante that may or may not be the hero that Star City needs. The fifth season premiere, “Legacy” had Oliver revisiting some surprisingly dark territory in this respect, yet at the same time, preparing to look to the future with a fresh team of street defenders.

The good news about the fifth season premiere of Arrow is that it’s quite a lot better than the rather sub-par season finale that ended off Season Four last Spring. The bad news however is that it’s still merely a solid episode overall, and doesn’t exactly kick off Season Five with a huge bang. Instead, the episode gets the job done, laying the groundwork for what’s to come, and exploring interesting new ideas that will go on to found the new season, but for now, it feels like the best of Season Five is being saved for quite a ways down the line. 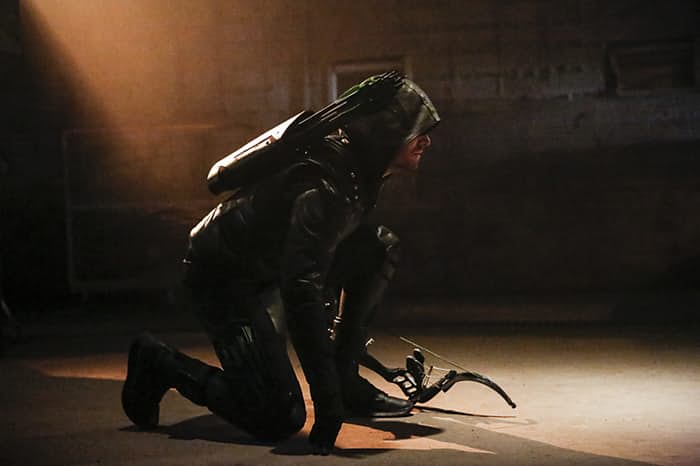 Season Four ended with Team Arrow fractured, and now down to just Oliver and Felicity, and Curtis, if you count him being the maintenance guy. Diggle has left for another military tour, Thea has taken up a post as Oliver’s mayoral aide and nothing else (yes, Oliver is still mayor of Star City, despite being sworn in temporarily, and supposedly having rock-bottom approval ratings), and obviously, Laurel is dead, and that has left Lance yet again drowning his sorrows at the bottom of a bottle, particularly since Donna broke up with him off-screen. That latter point is particularly frustrating, since Oliver’s steps backwards make at least some sense, but Lance returning to drink feels a bit forced. It doesn’t even stick by the end of the episode either, where he sees a statue of his daughter erected, and suddenly decides to go back to the vigilante game, now that he’s no longer a proper cop. Was it really that easy?

The spectre of Laurel was something that was done quite well in this episode for the most part though, particularly as Oliver finds himself unable to move on from his former team, despite there being no way to make it whole again. Oliver has even returned to using lethal force with certain criminals, on account of blaming himself for not killing Damien Darhk sooner, which may have saved Laurel’s life. Oliver returning to killing is shaky ground, but the way that the show justified it actually wasn’t bad, even if Thea is still correct when she accuses Oliver of taking steps backwards. I’m getting the feeling that Oliver is going to be taking another fall into very dark territory this season, and a lot of the storylines will involve picking himself up again. The rather constant mentions of moving forward in the face of great suffering made this ongoing theme very clear as well. 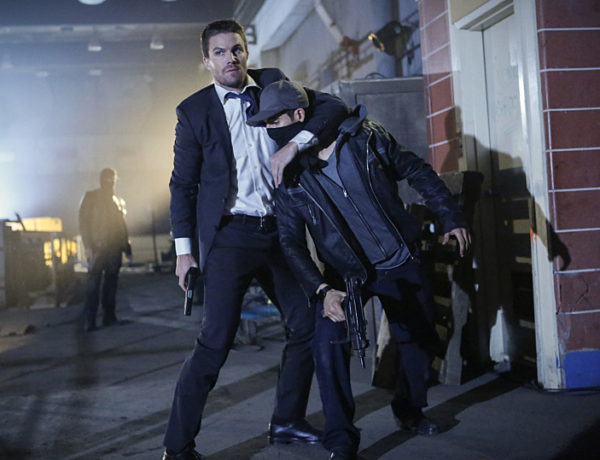 The criminals of Star City are certainly moving on in fact, since we have a pair of new villains to spearhead Season Five. One is a mysterious, highly capable archer that only shows up at the very end of the episode to murder a cop, being a baddie who isn’t named in the show proper yet, though it’s already been divulged that this is a Green Arrow-centric, DC Television Universe take on Prometheus, a super-villain that has opposed Batman, Blue Beetle, and the Justice League, among other DC heroes. The other baddie, who currently has a lot more bearing on the story, is Tobias Church, an original new gangster character that didn’t previously exist in DC Comics lore by , who represents an ambitious new criminal element that’s taking the fight directly to Green Arrow. Church seems to represent the threat of a new order, just as Prometheus seems to reference some sort of sins of Oliver’s past. If handled right, these villains could be two worthy threats that nicely bring the themes of the season into great focus, especially with a fresh batch of vigilantes on Oliver’s side.

Eventually, after Oliver manages to escape being taken hostage by Church and his crew, despite having to temporarily leave his mayoral staff with Church, he is convinced to allow a team of cops to help him free the hostages, putting him on the path to being a team player. The team’s leader is killed by Prometheus at the end of the episode, though Oliver is nonetheless able to even make the team known in a civilian light, when he swears them in as an elite mayoral task force that will dodge the (apparent) widespread corruption in the SCPD.

Felicity also successfully manages to twist Oliver’s arm into recruiting a new batch of masked vigilantes to directly assist Green Arrow, which include a hockey mask-wearing wannabe called Wild Dog (a smaller street-level hero from DC Comics lore), Evelyn Sharp, the fake Black Canary from last season, and someone else that Felicity hasn’t identified yet. After Curtis gets mugged while looking for Wild Dog, he also insists on joining the vigilante crew, and Oliver just lets him. Seriously? First of all, Curtis’ justification for becoming a vigilante is kind of weak. Yes, I know that he’s supposed to eventually become DC superhero, Mister Terrific, but surely, he could have found a better excuse to get there than being mugged once? Even if you factor in his experiences from last season, it feels like a leap to have Curtis suddenly want to risk his life nightly.

Beyond all of this, we also get another batch of flashbacks, which will allegedly be the show’s final set of flashbacks, as each represents one of the five years before Oliver came back to Star City to adopt the mantle of The Hood/The Arrow/Green Arrow. The only hole that’s left to fill in during the past is Oliver’s connection to the Bratva, the Russian mob, and that has Oliver fighting in Russia, and eventually getting the attention of Anatoly, his old ally from Lian Yu. Anatoly saves Oliver’s life, after Oliver is nearly killed on account of murdering a prized pit fighter in the ring, and when Oliver asks to become Bratva so that he can take out the man that Taiana wanted dead during last season’s flashbacks, Anatoly puts him through the hard course to get there, starting with a mass beating by Russian thugs. Of course. Hopefully, this last set of flashbacks can make up for the last couple sets largely being unsatisfying, but even if they’re not, I guess a potential Season Six and onward won’t include them anymore anyway.

Ultimately, the Arrow season premiere avoided the disappointment plaguing yesterday’s season premiere of The Flash, though, “Legacy” doesn’t hit the ground running itself either. Some story elements are forced in by rather clunky means, and even if the legacy left by Laurel, and Oliver’s new set of struggles in the past and present feel like a good start to the season, there also wasn’t much in the way of showstopping moments either. Even the promise that Laurel made to Oliver off-screen in Season Four being revealed, simply petitioning that a new Black Canary take up her mantle if she dies, feels forced after the fact. If Laurel’s promise was so important to Oliver, then why was he so resistant to putting another team together? Whatever the case, now that Oliver’s done with his latest bout of stubbornness, and Tobias Church has firmly seized the criminal underbelly of Star City, hopefully we can fully get Arrow on the road to redemption next week.

Arrow 5.1: "Legacy" Review
Arrow starts its fifth season on an effectively solid note, though doesn't present much in the way of true showstopping moments either.
THE GOOD STUFF
THE NOT-SO-GOOD STUFF
2016-10-06
76%Overall Score
Reader Rating: (1 Vote)
84%