With the whole strike affair sorted and Cloud 9 being firmly back to the usual grind now, Superstore was allowed to breathe a little bit more this week. “Guns, Pills and Birds” made for a pretty enjoyable episode, and one with a fairly prevalent theme, as several of the Cloud 9 employees had to deal with tasks that they had a strong moral objection to.

As much as the minimum-wage circuit is viewed as the domain of teenagers, college students and other such young folks, the fact of our modern world remains that many full-grown, fully-functional adults are forced to work in minimum-wage jobs, for one reason or another. This was spotlighted pretty well in an episode that dealt with the idea of, “Being an adult”, from the standpoint of understanding when you just have to let something go and roll with the punches. This smart theme was also nicely reflected in a subplot with Amy, as she can finally look forward to a weekend away from her husband and daughter. 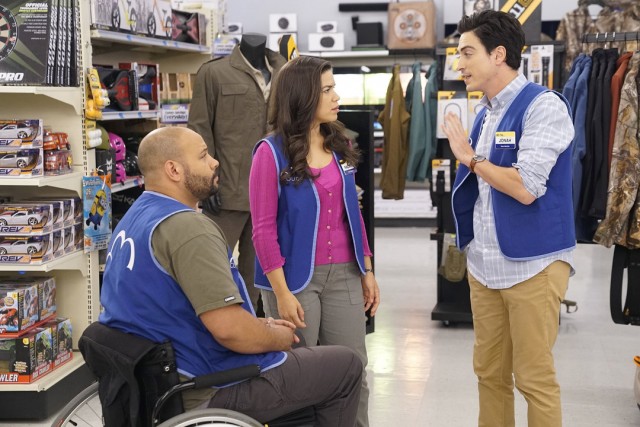 While Mateo was among the employees that faced a morally questionable issue, it was primarily Jonah and Glenn that carried this idea forward. This comes from Jonah being forcibly assigned by Amy to work the gun counter, despite Jonah being heavily against anyone owning a gun in any form, while Glenn learns that Cloud 9 sells the Morning After Pill, going against his religiously-rooted beliefs against contraception. The rest of the employees worked to supplement these other plots, particularly Garrett, who becomes terrified of a crow that flies into the store, forcing Mateo to be dragged along with Dina, who wants to safely release the bird unharmed, while Mateo and Garrett would rather kill it.

The Jonah storyline was among the episode’s strongest, since Jonah predictably refuses to sell anyone a gun, especially when all of the would-be customers that show up tend to be weirdos, except for the first guy, who has the misfortune of seeing just how uncomfortable Jonah is with handling guns. This plot wove together nicely with Amy’s subplot, especially when Garrett and Mateo both voice the thoughts of the audience as the two inevitably squabble, by asking them directly and publicly why they haven’t just banged already. Jonah and Amy fighting over when they should protest and when they should just deal with something also made for a nicely smart storyline in the wake of the big Cloud 9 protest that started the season, especially when Amy’s childish husband inevitably flakes out on her, and she’s yet again stuck with their daughter, ruining her plans for a weekend of peace.

Jonah’s refusal to sell guns to anyone also triggers an open-carry protest, which doesn’t have a huge amount of bearing on the episode, though it does push things along to Jonah having to confront his principles, and admit that maybe Amy is right. This is a politically tricky issue that Superstore might have been in over its head with (especially since this political commentary is pretty U.S.-specific), but Amy decisively ordering Jonah and the gun protesters to start acting like grown-ups and find a middle ground, worked well enough to settle things. It was pretty funny when the gun protesters all simultaneously pointed their guns at the runaway crow though, and appeared to be pointing them at Glenn when he was trying to make his own speech.

Regarding the dedicated Glenn plotline, it was alright, but it also had a pretty problematic first half. Glenn being completely unaware that the pharmacy sells the Morning After Pill is pretty unlikely to say the least, considering that he’s supposed to be the boss of the store. Not only that, but the fact that Glenn doesn’t raise similar objections to condoms, which would obviously be carried in the same section, to the point of it being common knowledge even beyond Glenn, feels like a pretty big plot hole. Glenn getting in the way of customers trying to buy the Morning After Pill also feels pretty unrealistic, even for this show. Didn’t he just get fired? Why would he give corporate a big fat excuse to fire him again, especially when he’s clearly fighting a losing battle? Hell, even the pharmacist directly points out that Glenn can’t stop the store from ordering more Morning After Pills, and he’s obviously wasting time and energy by trying to get rid of them, and that’s before he starts wasting money on that fool’s errand! 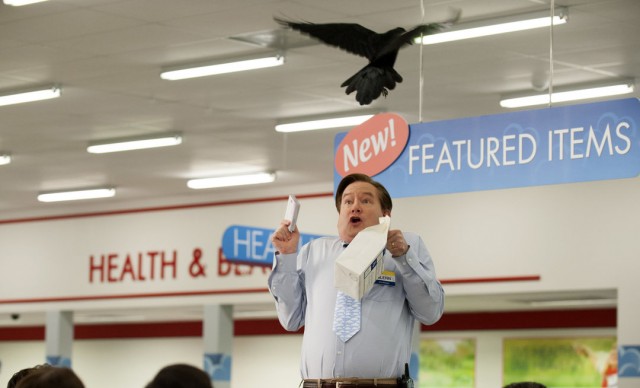 Past the halfway point of the episode, when Glenn tries to buy out the entire stock of Morning After Pills, then learns that drugs can’t be returned to the pharmacy, and he has to try to pawn them off to customers to make the money back, that’s when his plot starts actually getting funny. It would have been better if the show could find a more logical leap for Glenn to want to buy out the Morning After Pill stock, since Glenn isn’t the sharpest tool in the shed, but he’s still store manager, and he must understand that it’s not his place to dictate other people’s purchases. Like I said, the Jonah plot realized that theme of accepting what one can’t change a lot better, though Glenn’s plot wasn’t a total loss, since it did at least get quite a bit funnier in the episode’s second half.

“Guns, Pills and Birds” feels like Superstore going for a higher class of humour than it’s normally used to, and that growing ambition isn’t necessarily a bad thing, likely being a reflection of NBC’s increased confidence in the series as a big sitcom tentpole for them. The show does bite off a bit more than it can chew here and there, and Glenn’s shaky story foundation is an issue, but this feels like the most memorable episode of Superstore’s second season so far. I don’t think it’s a good idea for Superstore to get in the habit of abusing political commentary like this, since this show really works best when it’s light-hearted, but if the show is going to aim higher, it’s satisfying to see that it can still make a more challenging shot with its humour.