The Big Bang Theory presented an interesting idea that was long overdue this week, that being Sheldon and Amy finally moving in together… Sort of. After Amy ends up forced out of her apartment for several weeks, she must seek alternate living accommodations, which involves Leonard and Penny donating space, forcing Amy into cohabitation with Sheldon. At the same time, a subplot also unfolds with Howard, Bernadette and Raj, which continues the pregnancy misadventures.

If you’re at all familiar with this show though, you already know that living with Sheldon can’t be easy. Amy sharing a bed with Sheldon is where a good chunk of the humour is derived from in this episode, starting immediately from Sheldon refusing to pick a side on the bed, believing it would be inconsiderate, even when Amy doesn’t care. Admittedly, some of Sheldon’s bizarre sleeping habits were pretty amusing, even if a few jokes, like Sheldon’s weird aversion to flash photography, felt a tad forced. The punch line of Sheldon being insufferable to share a bed with was fairly predictable though, and the episode did telegraph a lot of these jokes early, which somewhat ruined their potency at times.

Another potential gripe with this episode is that every other character felt sidelined, even if this makes some degree of sense, considering that this episode inevitably has to revolve around Sheldon and Amy first and foremost. Leonard and Penny serve as an outside perspective to the big move, and they do have some interesting jokes to contribute, though they also don’t do much of note this week. Their storyline had plenty of opportunities for ludicrous, over-the-top celebrations to Sheldon finally being gone from Leonard’s living space, but what they opt to do is simply dance around in their underwear. That’s the best that the writers could come up with? Granted, Leonard suffering an asthma attack that still pains him the next morning was fairly funny, but surely, Leonard and Penny could have done more to celebrate their overdue independence. 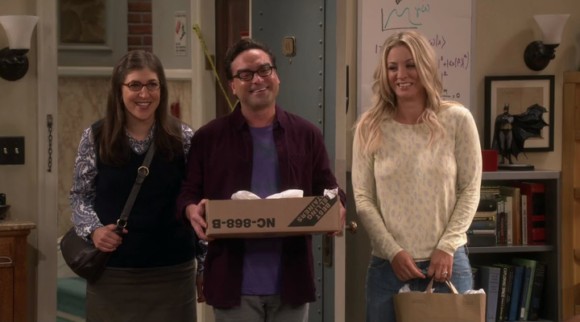 The subplot with the Wolowitz family and Raj also felt like a complete waste, and is kind of a stretch to begin with. Somehow, after an OBGYN appointment, the medical file is left unattended (why?), and Raj looks into it, learning the sex of the Wolowitz baby before Howard and Bernadette do. For some reason, this really bothers Howard and Bernadette, though from the start, this feels like a ridiculous non-conflict. If they don’t want to know the sex of their baby before it’s born, then why do they care if Raj knows? As long as Raj doesn’t tell them, what’s the big deal? It might be a little creepy that Raj is peeking into Bernadette’s medical file (which would never have been left for him in any semblance of reality), but it probably shouldn’t set Howard and Bernadette off the way it does here.

Fortunately, the montage of sleepless nights that all of the characters share towards the end of the episode made up for some of the questionable elements in this week’s storyline. Howard and Bernadette constantly calling Raj and hanging up when they go back and forth on wanting to know the sex of their baby was kind of amusing (couldn’t they just text him?), and the way that was intercut between Sheldon and Amy sharing a bed, and Leonard and Penny celebrating being away from Sheldon, made for lots of fairly decent silly moments. Again, the Sheldon jokes were telegraphed a bit too much, but at least they offered a satisfactory amount of laughs overall. 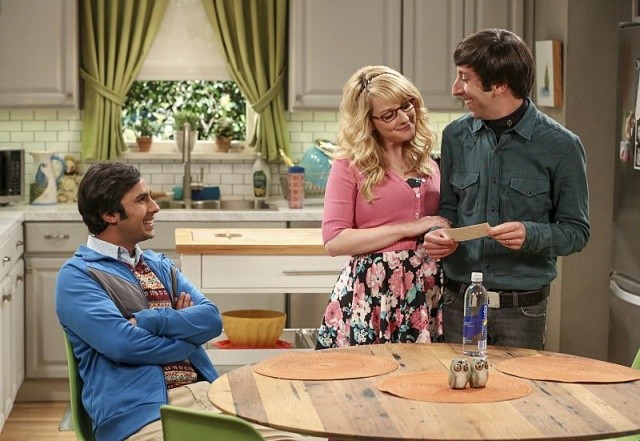 The Big Bang Theory has founded entire episodes around big character steps in the past, and this approach does seem to be mostly ideal for, “The Cohabitation Experimentation.” It’s a shame that the Wolowitz subplot particularly suffered from the heightened emphasis on the other characters’ shuffled living situations, but this was still a funny, reliably entertaining episode of The Big Bang Theory, if not a big standout. In terms of moving most of the show’s characters forward, it got the job done. I do hope that the show tries for some more ambitious ideas next week though, since there’s a lot of untapped potential in both of the new living situations.

The Big Bang Theory 10.4: "The Cohabitation Experimentation" Review
The Big Bang Theory finally had Sheldon and Amy share a living space this week, which dominated a reliably funny episode that nonetheless sidelined the rest of the characters.
THE GOOD STUFF
THE NOT-SO-GOOD STUFF
2016-10-10
80%Overall Score
Reader Rating: (1 Vote)
82%