Arrow and The Flash are taking a bit of extra time to get going with their latest seasons, but that doesn’t seem to be a problem for the second season premiere of Legends of Tomorrow. “Out of Time”, alongside the newly CW-broadcast season premiere of Supergirl that also aired this week, stands as among the best season premieres for DC’s current lineup of shows, and by far the best premiere for The CW’s shared DC Television Universe, exceptionally laying the groundwork for plenty of exciting developments in Season Two of Legends of Tomorrow, while also containing an exciting and fun storyline in its own right.

The episode was presented with a very inspired framing device as well, as historian, Nate Heywood, best known as one of the several incarnations of Justice Society superhero, Commander Steel from DC Comics lore (Heywood has also taken the names ‘Citizen Steel’ and ‘Captain Steel’, depending on the spot in DC Comics canon), makes contact with Oliver Queen in present-day Star City. Not yet any kind of superhero, Nate recounts a tale to Oliver, believing him as the only person who will take his story seriously, on account of Oliver being the Green Arrow (Heywood went to Oliver over Barry Allen, despite Barry actually having the ability to travel through time?), and being personally acquainted with Ray Palmer and Sara Lance. Heywood not only seems to be fully aware of the presence of the Legends throughout history, but also somehow figured out that Oliver is the Green Arrow off-screen, eventually convincing Oliver to take a submarine under the ocean to go see the wreckage of the Waverider. I don’t know how Oliver explained that trip to his mayoral staff, and I don’t know if Arrow is even going to try and bother explaining this away either, but whatever. 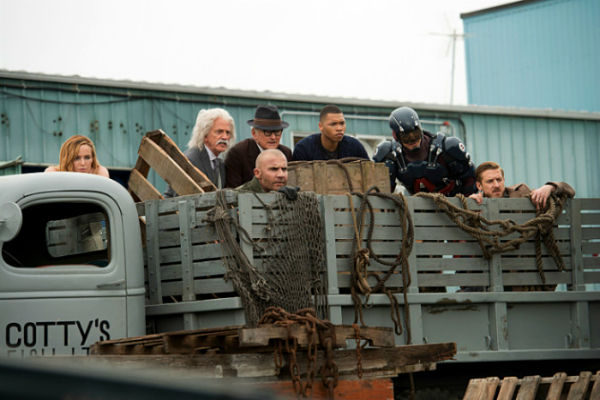 Regardless, the framing device comes in when Oliver and Nate discover Mick, who is being held in stasis. After waking Mick up, Nate and Oliver listen to Mick recount the story of how the Legends seemingly disappeared across time, with only Mick left in the Waverider. Apparently, everything started in 1942, the time period that Rex Tyler warned the Legends not to go to back at the very end of Season One, because of course it did. Evidently though, the Nazis have nuked New York City in the past, with WWII now ending in 1947, instead of 1945, thanks to this disturbance in time. This stands as a ‘time aberration’, an alteration to history by a time-traveling criminal, which the Legends are currently traveling through time around and trying to stop.

The trip to 1942 (after a brief trip to 17th Century France that simply led to entertaining humour and action for a bit), remained true to the style of the show as it was established in Season One, bringing the team to yet another interesting new setting. This was a setting that the Legends got plenty of mileage out of too, as Martin gushes over the chance to meet Albert Einstein, who seems to be kidnapped by the Nazis, leading to the nuking of New York with an atomic bomb. Rip says that the team has a bit of leeway before time is set with this new history, but Sara isn’t completely in tune with the operation to steal away Einstein before the Nazis do. Instead, while the rest of the Legends try to secure Einstein, Sara breaks off to try and track Damien Darhk, who is active in this time period. Sara being keen on exacting revenge on Darhk for murdering her sister, Laurel during the previous season of Arrow was very interesting, and nicely played off of Sara learning the news about her sister in the Season One finale.

Apparently, Einstein isn’t the reason that New York was nuked however, since the Nazis instead kidnapped Einstein’s ex-wife and fellow physicist, Mileva Maric, forcing her to build an atomic bomb akin to Einstein’s work on the Manhattan Project. Moreover, Darhk is revealed to be leading the Nazis in the kidnapping effort, with Darhk being the one behind New York’s destruction, rather than Hitler. The Legends predictably save the day, even if Sara tries and fails to kill Darhk while temporarily abandoning the team, though Mick is injured, and the heroes ultimately fail to stop the atom bomb as it’s loaded into a Nazi submarine. Rip decides that the only way to save New York in the past is to use the Waverider’s shields to absorb the atomic blast, dispersing the other Legends across history, putting Mick in stasis on account of his injury, and disappearing without a trace.

The idea behind Rip disappearing and abandoning the Legends to pick up the legacy of the Time Masters was quite interesting, and presents an especially promising new direction for the second season of Legends of Tomorrow, particularly since Rip’s story was so heavily tied to the now-destroyed Vandal Savage. The only slight sticking point to this great idea however is that the episode quickly rushed through the other Legends being scattered across time, making this displacement mere gag fodder, rather than a serious obstacle for re-forming the heroes. As funny as it is to see Ray running away from a T-Rex, Jefferson and Martin (they seriously both ended up in the same time period?) entertaining a young medieval king that nonetheless tries to execute them, and Sara almost burned at the stake in the 17th Century for being a witch that seduces young women (boy, Sara sure slept around with a lot of women in this season premiere!), this issue was very quickly resolved, and it made scattering the Legends across time pretty pointless. Rip could have just as easily dumped all of them in 2016, which also would have better explained how Oliver set up Nate to pick up with the rest of the team, before returning to his regular duties in Star City.

The episode’s ending was especially promising however, as the group saves history by forcing Einstein to disclose his collaborations with Maric, leaving Maric tightly guarded and unable to be grabbed by Darhk and the Nazis. Soon afterward however, the heroes are stopped by several 1940’s superheroes, recognizable by DC fans as being the Justice Society of America! Normally, the JSA operates out of Earth-Two in DC Comics canon, though I guess the DC Television Universe is keeping them in the same universe as the other heroes, and that’s fair enough.

Darhk also got a very promising resolution in 1942, as the Nazis say that his partner isn’t around to help him, only to have a red bolt take out every soldier, with Darhk’s partner being revealed as Eobard Thawne, the Reverse Flash himself! This was a very cool way to play off of the consequences from the premiere episodes of The Flash this season, where Barry’s actions effectively unleash Thawne back on time in the wake of Barry’s timeline manipulation, while also putting Darhk back into the picture, despite Oliver killing him at the end of Arrow’s previous season. This seems to be the first steps to establishing popular DC Comics super-villain team, the Legion of Doom in the DC Television Universe, with more recognizable foes from Arrow and The Flash providing an ‘anti-Legends’ team this season soon, according to the showrunners. 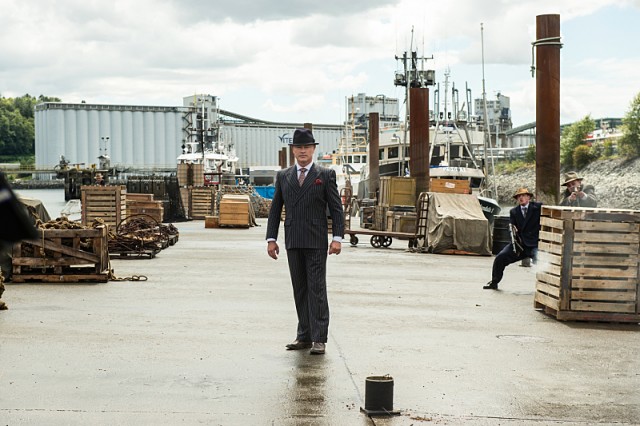 As much as Arrow and The Flash are taking their time building their own seasonal conflicts for their newest upcoming episodes this season, Legends of Tomorrow is the one DC Television Universe show that really did hit the ground running with its premiere this season, if one doesn’t count the detached Supergirl. Almost every element of, “Out of Time” made for a superb and fresh way to set up a new conflict for the Legends, now that the Time Masters and Vandal Savage are gone. The episode even found smart, effective ways to already start laying the groundwork for both the Justice Society and the Legion of Doom as well, who will hopefully have their scale expanded like never before, given this show’s time travel hook. Rip Hunter could be MIA for quite a while, and that’s a bit of a bummer, but fortunately, his absence seems set to prove that these heroes can now fully stand on their own, and that should make for another great season of Legends of Tomorrow to look forward to!

Legends of Tomorrow 2.1: "Out of Time" Review
Legends of Tomorrow offered a superb premiere for its second season this week, as familiar villains start making a big attack on history, and Rip makes a big sacrifice to keep the team going.
THE GOOD STUFF
THE NOT-SO-GOOD STUFF
2016-10-15
88%Overall Score
Reader Rating: (0 Votes)
0%