Superstore moved away from the somewhat politically charged plot of last week, in favour of lightening things up with a thoroughly silly plot to found this week’s episode, “Spokesman Scandal.” After Kyle the Cloud 9 Cloud, the company’s mascot/spokesperson, is jailed by the FBI for allegedly being a murderer and cannibal, the store is thrown for a loop in various interesting and increasingly ridiculous ways, even if this is mostly prevalent in the main plot, which involves Glenn trying to reason out the news of Cloud 9’s big scandal.

In a way, you could still argue that Superstore is channeling a real-world spirit with its jokes in the main storyline with Glenn this week, since this episode seems to be pretty blatantly inspired by the infamous Jared Fogle controversy from fast food chain, Subway. Despite that however, rather than provide any sort of grounded viewpoint of this bizarre, twisted event for Cloud 9, Superstore instead pivots towards a more ridiculous, Glenn-approved solution, namely when news reports find a bunch of grisly evidence of several murders in the spokesman’s home, along with a bag of marijuana, which Glenn latches on to, and convinces himself that the murders only happened because the spokesman was high. 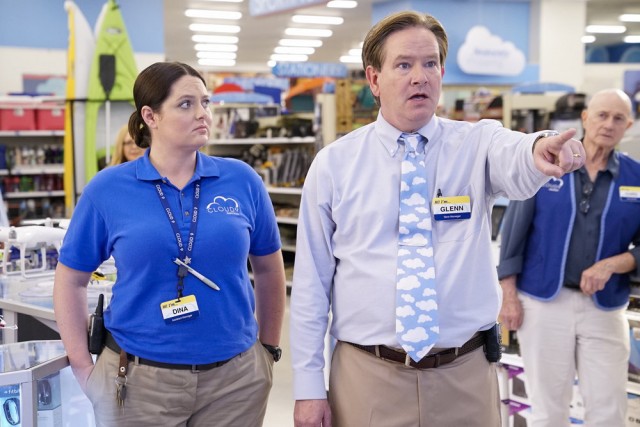 The Glenn storyline did strain credibility a bit last week, but in this episode, Glenn’s aggressive, hyper-moral obliviousness actually worked perfectly. Things only got funnier when Dina takes advantage of the situation to force mandatory surprise drug tests on all of the employees, seemingly to get at a well-known stoner employee that she doesn’t like. Does Dina truly like anyone though? I guess she’s alright with Amy and Jonah, and maybe Garrett for the most part, though again, putting Dina on a ridiculous employee vendetta is something that really fits, and Dina’s past pettiness certainly lends itself to the idea that she’d inconvenience every Cloud 9 employee all at once, just so she can get at one pothead.

Cheyenne also came back to work at Cloud 9 this week, which feels very quick, considering that Glenn gave her maternity leave. I suppose that it was only a few weeks though, so maybe it does fit that Cheyenne would be coming back to work in this week’s episode. We don’t see Bo, beyond hearing Cheyenne talk to him on one quick phone call, but this may be predictable, considering that Johnny Pemberton is now busy as a lead actor on FOX’s Son of Zorn, which means we’ll probably be seeing a lot less of Bo on Superstore for this season at least, and likely subsequent seasons of Superstore, should Son of Zorn be renewed beyond this Fall. Regardless, Cheyenne’s storyline works with Garrett and Sandra, as she annoys both of them with a continual onslaught of baby photos and videos. 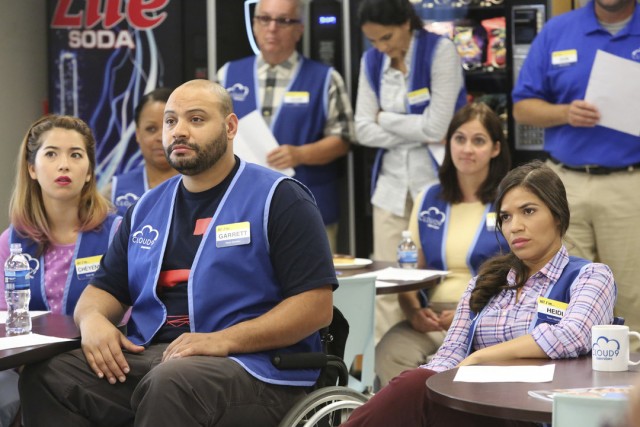 Yes, at long last, Sandra finally gets to play a large ongoing part in a character storyline this week! This is really overdue, since Sandra was easily the funniest side character in Season One (though Myrtle and the fully silent Brett are also great), and the idea of giving her a bigger role on Superstore going forward is definitely a promising one. Sandra is still put upon to the nth degree, but she at least gets a chance to bond more with Garrett, and later with Cheyenne, when this storyline finally wraps itself up, justifying why Sandra still bothers to work at Cloud 9, despite the constant abuse she sustains there. The way that this storyline wrapped up was a bit questionable, since Garrett finally just blows up at Cheyenne to shut up about her baby, something that Cheyenne is just immediately cool with (yes, a teenage girl just completely acquiesced to that!), only to proceed to laugh at Garrett with Sandra about how Garrett celebrates new sneakers. Fortunately, this was still a very funny storyline though, so the illogical ending isn’t worth dwelling on too much.

Less effective among this week’s storylines was the Jonah/Amy subplot, which largely felt like disposable gag fodder. Jonah, somehow, convinces Amy to go along with an increasingly ridiculous series of dares, which are quite funny at their best, though they also make very little sense, especially when Amy just goes along with everything and completely blows off work, which is very out-of-character for her. This makes even less sense when one considers that Cloud 9’s district manager, Jeff is once again patrolling the store, and even catches the two goofing off at one point, only to be easily shooed off. Seriously? Then again, it was sweet to have the episode end with Jeff finally asking out Mateo, and proving Mateo right about Jeff being into him. Mateo has to keep this secret, since a relationship with the district manager is obviously forbidden, but it’s exciting to see this big character shift for Mateo begin to unfold, hopefully giving the character a good over-arching plotline for Season Two. 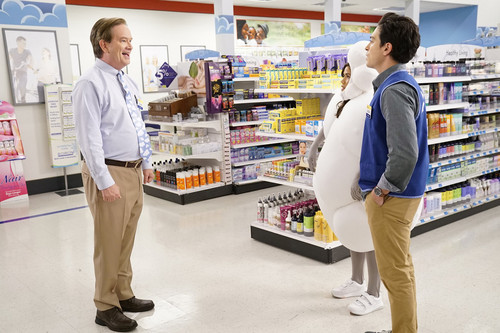 Superstore once again brought the laughs in a great way this week, despite making the opposite aim with its humour in contrast to last week. The expanded role for Sandra and the budding Mateo/Jeff relationship are certainly highlights, as was Cheyenne coming back to work, even if she was merely portrayed as an adorable nuisance this week. The show also found a very clever and hilarious way to take advantage of Glenn’s unique personality and mindset this week, and working Dina into this mess so effectively was really icing on the cake. Superstore mostly seems to be back on its A-game again, and while the repetitive grind may be depressing for the Cloud 9 employees, at least we can start reliably looking forward to the same good chuckles every Thursday night!