It’s a welcome new direction to have a new Team Arrow come to be in Season Five of Arrow, and Oliver’s first session with the new team begins in this week’s episode, “The Recruits.” After summoning Wild Dog, Evelyn Sharp (who is supposedly the DC Television Universe incarnation of superheroine, Artemis, according to the showrunners), and Curtis, Oliver gets to work on a very strict training regimen, one that his new students quickly take issue with.

Again, it’s a welcome new direction for Arrow to groom a new team of heroes, but their first outing did leave a bit to be desired. This week’s episode felt kind of unexciting for the most part, and primarily dealt with a threat that wasn’t a true threat, along with a conflict that just felt rather forced, even if it did make a noble attempt to play off of the fallout from Season Four. Obviously, the new recruits are green as grass as well, and a lot of their first outing hits many predictable beats, including at least one of the students disobeying Oliver in a heated situation, and Oliver being the angry teacher that needs to learn to trust his students more. 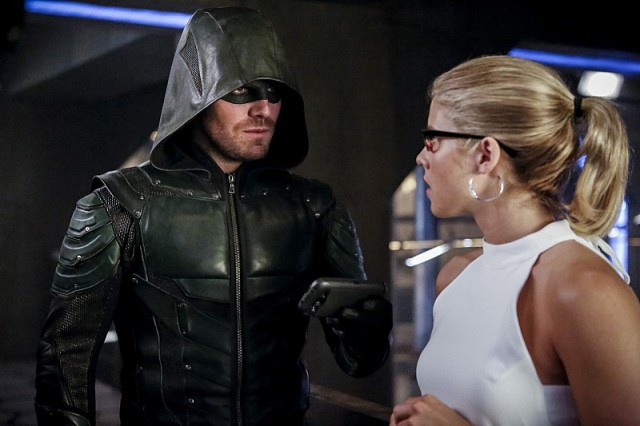 The episode certainly wasn’t a total bust, as it still had several standout action scenes, as Arrow can be consistently trusted to deliver, but it did ultimately end up being a bit of a disappointment, since the new team doesn’t feel all that appealing yet. They’re too raw, too snippy and too unimpressive. I’m sure that they’ll come together better later in the season, but for now, it’s difficult to believe that training these punks to be vigilantes, and the especially wet-behind-the-ears Curtis, is at all a good idea. The schmaltzy message about trust and friendship also felt a little out-of-place, with the episode strangely advocating coddling the team’s feelings, which really doesn’t make sense, given the very harsh and violent criminal element of Star City, which Oliver obviously has the right idea about.

The biggest surprise of the episode is that the new hero that truly stole the show wasn’t even among the recruits. Instead, Oliver and Felicity end up on the trail of the mysterious individual that Felicity had apparently hinted at tracking in the season premiere last week, who has the supernatural ability to snare foes in the rags of his costume. Some evidence points to the costume being very ancient and very magical, and despite this character attacking the representatives of Amertek, the company working with Oliver in his mayoral gig to fund a free healing event for ailed children in the city (also a noteworthy company in DC Comics lore, as they were responsible for the creation of Metropolis-patrolling superhero, Steel), it later comes out that Amertek were bad guys anyway.

Turns out, Amertek is in bed with Tobias Church, trying to offload excess weaponry, after the one nuke that hit in the wake of Damien Darhk hijacking Genesis last season decimated the town of Havenrock, when Felicity diverted it from its intended target of Monument Point. The nuke was made by Amertek, and that led to a plummeting in stock prices, threatening the company with bankruptcy (that must be one financially irresponsible company if they weren’t prepared for a stock drop), hence why they sold weapons to Tobias Church, who somehow has $100 million just lying around? Huh? Something is weird about this villain plot this week, even by the standards of the DC Universe. It was kind of cool to have the lone survivor of Havenrock be that supernatural vigilante though, who turned out to be obscure DC Comics superhero, Rag Man. The villain plot may have been a bit contrived, but drawing from last season to bring Rag Man into the mix worked out a lot better.

Sadly though, an entire subplot with Diggle also proved to be rather tedious, and simply ate up screentime. Diggle is running an op with a new squad of soldiers, who he intends to look after in their mission to steal some bad tech from terrorists. Diggle’s squad ends up betrayed by their superior though, and Diggle ends up framed for the crime. That’s the entire subplot. Really? This check-in with Diggle, and this need for Diggle to get out of a fresh batch of trouble is kind of interesting, but for now, this storyline is pure filler, and completely disconnected from the rest of the important events going on in Star City. Maybe the show will tie this conflict in with Tobias Church or Prometheus somehow (Prometheus finally identifies himself at the very end of this episode, after telling Church that he’s forbidden from killing Green Arrow), but at this point, the Diggle storyline just isn’t meshing with the rest of the show very well.

On the bright side however, the flashbacks with the Bratva improved a bit this week. Oliver is shown to have undertaken the same exercise that he’s subjecting his new recruits to in the present, being stopped from ringing a bell, despite one Bratva agent fighting off four strong and highly capable opponents, including Oliver. Oliver eventually figures out that the key is to work with his allies, eventually ringing the bell successfully. This leads to the other three men being shot and killed however, with Oliver unwittingly sacrificing his three allies to continue his training with the Bratva. Suddenly, Oliver being so vicious and bloodthirsty during his first run as The Hood in this show’s first season makes a bit more sense, and if Arrow is going to try and create a contrast between the solo-emphasizing Bratva and the need for a team of heroes in the present, that is something that could work pretty well for the final set of flashbacks this season.

Overall though, “The Recruits” ended up being a frustrating misfire for Arrow, and that’s annoying when the show has already had more trouble than usual finding its footing since the latter end of Season Four. Oliver’s team will hopefully come together later, but for now, they feel too annoying and incapable. At least the flashbacks got a bit better this week, but that also didn’t help the excessively disconnected Diggle plot, or the whole Amertek issue that didn’t seem to add much of interest. Thea offering Lance a job at the mayor’s office has some promise, but that’s another thing with its potential wholly unrealized for now. It’s obviously far too early to write off Arrow’s fifth season at this point, but hopefully it starts making more of an effective impression soon. I want to get behind the new team, and I know many other viewers must want to do that too. We just need a real reason to root for them.

Arrow 5.2: "The Recruits" Review
Oliver's team fails to impress in a somewhat tedious episode of Arrow this week, which at least offered an interesting new hero and some slightly improved flashbacks.
THE GOOD STUFF
THE NOT-SO-GOOD STUFF
2016-10-13
65%Overall Score
Reader Rating: (0 Votes)
0%