It’s still another week before AMC’s monstrously popular comic book-inspired horror drama series, The Walking Dead begins its seventh season, but as with last year, AMC isn’t waiting for the new episodes before securing the show’s future. The premium cable outfit announced today that The Walking Dead has already been renewed in advance for Season Eight, which will premiere in Fall 2017.

Obviously, the cast and story details for Season Eight have yet to be decided, particularly since any number of characters could live or die by the end of Season Seven. It’s probably a safe bet that Andrew Lincoln’s Rick Grimes will continue to headline the series as the leader of its post-apocalyptic survivor protagonists however, likely with other series mainstays such as Norman Reedus’ Daryl Dixon and Melissa McBride’s Carol Peletier. Season Seven will introduce a major arch-foe for Rick’s group in Jeffrey Dean Morgan’s Negan though, who ended Season Six and begins Season Seven with the brutal murder of one of Rick’s survivors, a murder that still has yet to be positively identified by fans, even if a teaser clip by AMC predictably reveals that Rick was not the one to die.

The Walking Dead adapts the highly-celebrated, award-winning series of ongoing graphic novels by Robert Kirkman, Charlie Adlard and Tony Moore, published by independent comic book outfit, Image Comics, which involves a ragtag group of survivors trying to survive in a brutal zombie apocalypse, where the living are often a greater danger than the undead. AMC’s The Walking Dead remains the No. 1 most watched show on all of television at this point, with its companion talk show, Talking Dead being the No. 2 most watched series on television overall, along with obviously being the most watched talk show on all of television. The series bled some viewers after the previous Season Six, which was criticized by many fans and critics (including us) for being uneven, tacky and overloaded with cheap, fan-baiting fake-outs, though The Walking Dead still remains at the top of the heap among popular television shows on any network or platform. 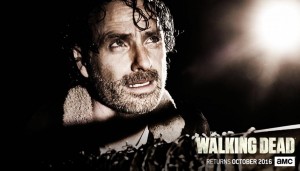 In other Walking Dead news, AMC’s spin-off series, Fear the Walking Dead is also set to return with a third season in 2017, which will air after The Walking Dead’s seventh season concludes next Spring. Telltale Games will also be continuing their massively praised series of The Walking Dead narrative-driven adventure games very soon, with The Walking Dead: Season Three – A New Frontier, which will bring protagonist, Clementine into her teen years, as the Telltale games catch up to the current timeline of the graphic novels that inspired them.

Keep shambling to Eggplante for all major news and updates on AMC’s The Walking Dead.