Superstore delivered some somewhat heavy emotional stakes between most of its storylines this week, while also relying on good old-fashioned antics for the remaining one. “Dog Adoption Day” was another good episode with plenty of laughs, and one that also finally brought Johnny Pemberton back to the series as Cheyenne’s imbecilic wannabe rapper boyfriend, Bo, despite Pemberton’s new gig as a lead on FOX sitcom, Son of Zorn.

The episode properly kicks off with a main plot that involves Cheyenne and Bo fighting incessantly, to the point where YouTube videos are captured of them in conflict within Cloud 9, which also leads to some very amusing inadvertent filming of Glenn hilariously failing to control the situation. The two decide to settle their fights by getting married on the weekend, something that Glenn and Amy have very different reactions to, and this splits Bo and Cheyenne into separate sub-storylines within the main storyline. 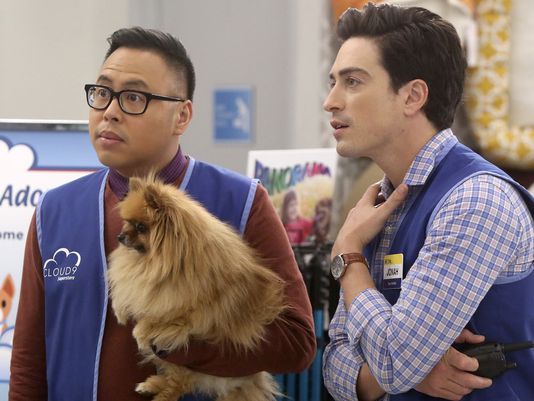 This provided an interesting two perspectives on the complicated situation of Cheyenne and Bo, who are now the teenage parents of a newborn baby. Amy, naturally, is the naysayer of the marriage, while Glenn embraces the idea of the two getting married and resolving Cheyenne’s and Bo’s perceived religious dilemma of having a baby out of wedlock, and even goes as far as to take Bo to look at a house for him and Cheyenne. Bo and Cheyenne carried this plot very well, and both Johnny Pemberton and Nichole Bloom offered some of the biggest laughs this week, though Mark McKinney was also a big standout, since Glenn got stuck in several amusing bad situations this week.

This is because Glenn ends up using a realtor from his church, and ends up roped into a situation where he has to co-sign on a house with Bo, and be responsible for the virtual certainty of Bo being unable to pay for the house, and Bo damaging the house. Obviously, Glenn is disinclined to do this, and this anxiety led to plenty of funny moments, especially when Glenn did end up signing for the house in the end, simply because of a half-hearted emotional appeal by Bo. Glenn being a pushover has become one of his defining character traits, and Superstore is finding lots of amusing ways to exploit the irony of Glenn being top dog at Cloud 9, despite also being the easiest to sway and overrule.

The Bo/Glenn interactions tended to work a lot better than the Amy/Cheyenne interactions, which not only felt like a bit of a re-tread of Amy material from Season One, but also incorporated a somewhat creepy turn, where Amy pushes Cheyenne towards another suitor, then learns that the guy is a middle-aged teacher. This embarrassing twist is funny on its own, but the idea of making a middle-aged man creepily obsessed with Cheyenne is somewhat pushing the light-hearted boundaries of the show, especially since Cheyenne still seems to be underage at this point. I’m surprised that NBC would even go there, frankly, but then again, I guess last week’s storyline involved a serial-killing, cannibalistic store mascot. Still, Amy pushing Cheyenne towards a different man was bad enough, and despite some laughs being offered from this plot, primarily due to Cheyenne’s bubbly stupidity, it sort of came off as more uncomfortable than truly funny.

Surprisingly, the title of the episode didn’t even reference this main plot either. Instead, the titular subplot centered on Jonah and Mateo being forced to work together to adopt out dogs during an adoption rally, and learning that any dogs they don’t sell will be put down by the shelter. This has Jonah and Mateo forging an uneasy alliance with each other, and actually working surprisingly well together! Jonah even tries to befriend Mateo afterward, which naturally doesn’t go as planned, since Mateo is still determined as ever to constantly one-up Jonah, seemingly for no reason at all. This is still a funny interaction for these characters, though Mateo’s ridiculously competitive behaviour did strain the joke at times. Why does Mateo care about seeing more movies than Jonah? Why does he care about being in the hospital longer? How does that apply to Mateo wanting to be a better employee at Cloud 9? It just doesn’t really make sense. 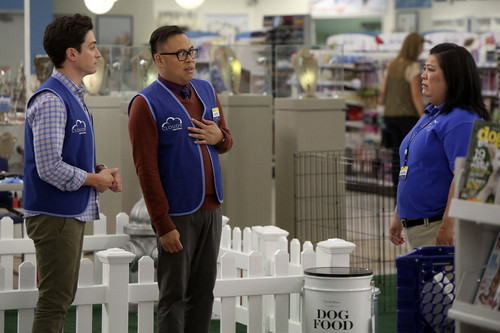 The remaining subplot was more or less gag fodder, but it also served as a highlight in terms of laughs this week. This is because the subplot paired up Garrett and Dina, easily two of this show’s funniest characters, with Dina refusing to pay Garrett after he accidentally refuses to clock in until two hours into his shift. This has Garrett stalking Dina and making sure that she never breaks any rules in the Cloud 9 Employee Handbook, including rushing her through lunch breaks, and preventing her from going to the bathroom because she already took a bathroom break. Dina’s stubbornness and Garrett’s love of pranks blended perfectly here, and even if this subplot was speedy and didn’t have much bearing on the episode, it still delivered a strong dose of great gags.

Superstore is taking on challenging material with the idea of showing the highs and lows of being a teenage parent, not just with Cheyenne’s and Bo’s characters, but in referencing Amy’s past as well. The show doesn’t always realize this material perfectly, but it’s still very effective at mining laughs from otherwise grim and overwhelming circumstances, and that came into great focus in this week’s episode. “Dog Adoption Day” set up a promising new story direction for Bo and Glenn, while also having some good fun with the other employees, and that made it another overall satisfying trip to Cloud 9. Some may be bothered by a few of the creepier and more uncomfortable elements of this week, from middle-aged teacher pedophiles to dog euthanasia, but for the most part, everything remained in great fun.

Superstore 2.5: "Dog Adoption Day" Review
Superstore presented an amusing new development for Bo's and Cheyenne's tense new parenthood this week, and had some good fun with the other employees too.
THE GOOD STUFF
THE NOT-SO-GOOD STUFF
2016-10-21
82%Overall Score
Reader Rating: (1 Vote)
16%