The Flash finally rounded off the recognizable pantheon of Flash villains known as ‘The Rogues’ from DC Comics lore this week, comprising the Scarlet Speedster’s most well-known and beloved baddies. We’ve already seen the likes of Rogues regulars such as Weather Wizard, Trickster, Captain Boomerang, Heat Wave, Golden Glider, and of course, frequent Rogues leader and mastermind, Captain Cold on this show, and now, we get to be introduced to DC Television Universe incarnations of Mirror Master and Top, the two major Rogues agents that haven’t previously been featured on The Flash.

It’s just too bad that Mirror Master and Top felt very short-changed and forgettable as disposable villains-of-the-week in their debut episode. They suffered from the same character downscaling that already plagued two separate incarnations of Weather Wizard on this series, and that led to, “The New Rogues” feeling like a partially compromised episode, even if most of its subplots were still pretty entertaining. The show’s usual tendency to do right by female villains-of-the-week even fell by the wayside this time, as the newly gender-swapped Top, normally a male in DC Comics lore and other related DC media, but redesigned as a female love interest of the still-male Mirror Master for The Flash, doesn’t feel like much more than an airheaded sidekick, despite the rich DC Comics history of her inspiration. Hell, the show doesn’t even truly get her abilities right, making Top merely induce vertigo (which, to be fair, Top eventually learned to do in the comics), rather than spin super fast. Maybe The CW felt that the visual of a woman spinning at super-speed looked too ridiculous, but it’s no more ridiculous than a guy who can run in and out of mirrors! 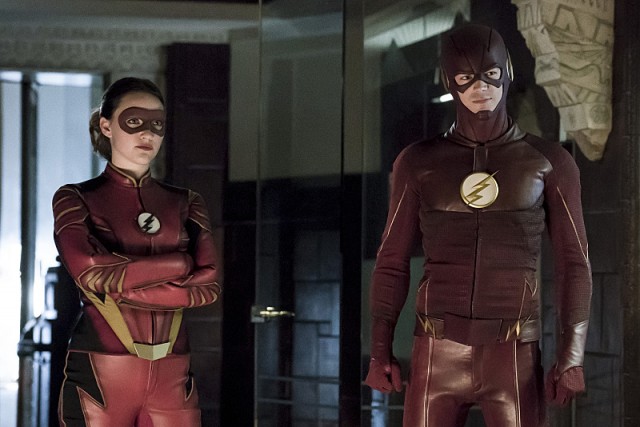 So, rather than becoming truly complex and appealing foes to rival their counterparts from DC Comics lore, Mirror Master and Top just became the latest jokers to be hit by the Dark Matter Wave at the start of the show, and given random metahuman powers. Mirror Master and Top are at least made slightly distinct by being underlings of a pre-Captain Cold Leonard Snart, finally allowing Wentworth Miller to re-appear on the show and start exercising his intricate multi-series contract with The CW’s DC shows as of this week, but their motivations are paper-thin. At first it’s about finding and hunting the vanished Captain Cold. Then it’s just about robbing banks and causing trouble. Maybe these characters will become better fleshed out later on, something that Weather Wizard still craves within this show’s canon, but for now, they’re just especially tricky foes that serve as business as usual for Barry, beyond Jesse tagging along in this case.

Like I said, the subplots in this episode are where most of this week’s appeal lies, even if not all of them universally worked either. There was a heavy dose of romantic drama all throughout this episode for example, with Iris getting annoyed at Barry being unable to be affectionate with her in front of her father, Jesse confessing her romantic affection for Wally, only to have Wally reject her out of fear of losing her to Earth-Two, and Detective West conveniently ignoring the romantic advances of a colleague at CCPD. Some of these storylines made sense, such as the Wally/Jesse conflict and West having a hard time with the idea of moving on from his late ex-wife, but the Barry/Iris storyline, where Barry somehow can’t show affection for Iris in front of Detective West (despite West being well aware of Barry’s love of Iris for many years), once again felt a bit forced. I don’t know why the show struggles so much with what’s supposed to be its main romance. It’s managed a few genuinely great Barry/Iris storylines and scenes, but more often than not, Barry’s and Iris’s relationship comes off as juvenile when it should be more profound.

Yet another subplot also unfolds this week with Wells, Cisco and Caitlin, as Wells decides to get around the thorny issue of him inevitably having to return to Earth-Two by sending out a cosmic, multi-dimensional want ad for one of his doppelgangers across the Multiverse. That’s quite a solution, but it does lead to a humourous montage of alternate Wells variations, finally ending with an especially chipper, light-hearted Wells coming to Earth-One (which he strangely already knows is Earth-One? Wouldn’t he feel like his Earth is Earth-One?), and giving Earth-Two’s Wells the peace of mind necessary to return with Jesse towards the end of the episode. It even looks like Jesse and Wally are going to have one hell of a long-distance relationship between universes, and hey, more power to them, I suppose.

The only other story element of note is a point where Jesse makes a mistake against the villains that leads to Barry becoming trapped in a mirror. When Cisco and Wells try and fail to invent a freezing device that allows Barry to phase out of the mirror, Caitlin covertly uses her freezing powers to cool the mirror enough to allow Barry to escape. Wells picks up on this, but is whisked back to Earth-Two before he can effectively warn the others, at least beyond tipping off Cisco that the device isn’t what cooled the mirror. An epilogue then has Caitlin taking a shower, only to involuntarily freeze the better part of her bathroom, while also noticing that her lips are turning blue and her hair is turning white. Looks like Caitlin rescuing Barry may have some big consequences, as Caitlin’s Killer Frost identity appears to be coming out of the woodwork for our main Earth-One Caitlin Snow this time. How much longer will she be able to hide it from the rest of Team Flash?

Considering that this episode gave us our final two big Rogues for The Flash, “The New Rogues” did feel like a bit of a let-down with its main plot, though at least the subplots remained pretty interesting and fun. I do hope that a lot more is done with the characters of Mirror Master and Top on this show in the future, even if Captain Cold joining the growing Legion of Doom on Legends of Tomorrow,  on top of Heat Wave still hanging with those heroes at this point, may further hurt The Rogues’ portrayals on The Flash, after they’ve already missed more often than they’ve hit. It’s annoying, since The Rogues easily offer many of the best villains and villain stories in DC Comics’ Flash stories for the most part, yet The Flash still seems to be figuring out its recipe for truly making The Rogues a worthy, distinct force for Barry to square off against. Disappointingly, the so-called ‘New Rogues’ can’t even hold a candle to most of the old ones.

The Flash 3.4: "The New Rogues" Review
The Flash finally introduced Mirror Master and Top to the ranks of Barry's foes this week, though they failed to impress amidst several more interesting subplots.
THE GOOD STUFF
THE NOT-SO-GOOD STUFF
2016-10-26
81%Overall Score
Reader Rating: (0 Votes)
0%