The Big Bang Theory has officially moved back to its regular Thursday night slot for the season this week, and once again, the show feels like it’s coasting at half-speed in Season Ten’s first Thursday episode. “The Fetal Kick Catalyst” was comprised of three fairly middling subplots that had sporadic laughs, and mostly amounted to a forgettable filler episode overall.

The three plots that comprise the episode are all more or less given equal billing, with the title referencing Howard suddenly feeling Bernadette’s baby kick while sleeping at night. This suddenly has Howard going into a frenzy with preparing the Wolowitz house for the coming of the child, something that Raj quickly noses into as well, and while shopping off-screen, the two not only buy a crib, but also a minivan. 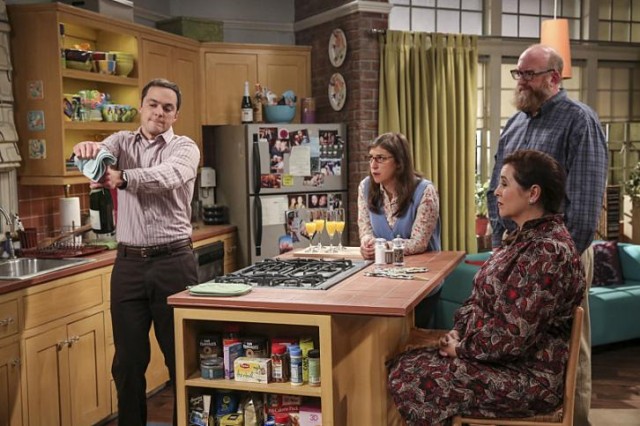 Immediately, this is kind of disappointing. Why keep Howard’s and Raj’s shopping trip off-screen? Part of the reason why many of the jokes in this storyline fizzled is because they kept referencing an event that viewers never saw. Things like Howard and Raj being mistaken for a homosexual couple, and Howard impulsively splurging on a minivan because a car salesman told him it was a good, “Mom car”, would have been a lot funnier to see than Howard trying to pitch Bernadette on impulse purchases that she’s obviously going to complain about.

Making matters worse is that this storyline also ends on a weird, unsatisfying note. When Howard and Raj try to demonstrate the minivan’s mom-friendly capabilities for Bernadette, Howard throws out his back, and insists on being rushed to the ER, despite Bernadette (and common sense), dictating that it’s not necessary. Eventually though, Bernadette caves to not only taking Howard to the ER, but buying the minivan… For some reason. The show never explains what exactly makes Bernadette change her mind about the van, let alone the expensive crib that Raj insisted on. Ending the storyline on the joke of Howard being soothed by Batman: The Animated Series is also a pretty blatant non-joke, with no real punch line. This is a decade-running sitcom that is about nerds. Why are we suddenly supposed to find the mere act of them watching a nerd-friendly thing funny?

Over on Leonard and Penny’s end, they also get their own subplot, with Penny being invited to an autograph signing for her fictional schlock horror films, Serial Ape-ist and Serial Ape-ist II. Leonard talks Penny into going, and the results are exactly the punchline attempts that you would predict long in advance. Penny gets nothing but mouth-breathing fanboys fawning over her, hating her movie, and objectifying her, while Leonard humiliates himself with the odd insistence of a portable change converter. The idea of the story leading into Leonard having to explain to a group of lonely, socially awkward geeks how he got Penny to marry him is sort of funny, but again, most of these explanations are off-screen, and the rest are jokes that The Big Bang Theory has already done to death. Penny revisiting her acting days had some promise, but the execution was really half-baked here.

The remaining subplot involves Amy trying to talk Sheldon into having people over in their temporary lodgings at Penny’s apartment. Sheldon has to have his arm twisted, but he eventually agrees, and thus they invite over Stuart, Amy’s geologist friend, and a Romanian tenant from downstairs that we’ve never seen before. Surprisingly, the Romanian woman often had the funniest jokes in this episode, if for no other reason than the show hadn’t used them before. Some may be uncomfortable at the show taking shots at foreigners with the idea that this woman is stupid enough to somewhat learn English by just parroting words on the television without context, but at least this manages a chuckle every now and again, when the writing gets a little tighter with some lines. 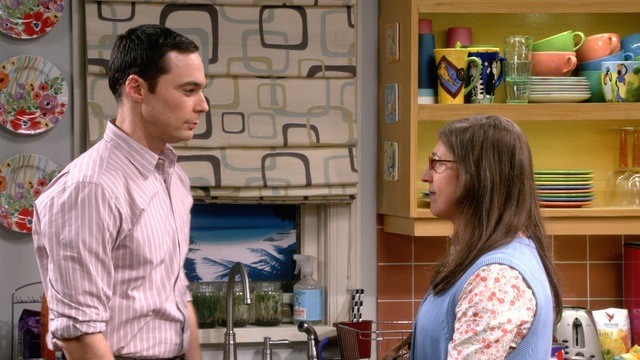 Again, the episode touches on an interesting idea with the final result of this storyline, as it comes out that Sheldon is viewing the brunch as a test run with those he doesn’t consider close friends, before inviting his, “Real friends” over. This greatly upsets Stuart, who directly calls out Sheldon on the idea that Stuart is not a close friend to Sheldon and Amy, yet considers Sheldon and Amy to be like family. This was actually a smart climax for this storyline, which cleverly addresses the group as a whole often shirking Stuart and taking him for granted, despite his continued presence in their affairs. The show didn’t go all the way though, since there were no real consequences after this revelation came out, with the episode ending as Sheldon and Stuart down a bunch of mimosas before drunkenly telling each other how much they like each other. Really? That’s it? That’s all the fallout to such a turn? The show isn’t even going to try to build a multi-episode storyline where the group, or at least Sheldon, has to try and earn back Stuart’s appreciation?

It’s starting to become a disappointing pattern to see The Big Bang Theory more evidently showing its age by its tenth season. “The Fetal Kick Catalyst” fell back on too much of the same tired humour that this show initially built itself upon, and it squandered its interesting ideas by not effectively fleshing them out beyond a few minutes at a time. There were some funny jokes here and there, and I wouldn’t say that this was a bad episode, but it was also a very mediocre and forgettable episode. This may be the most watched sitcom on television right now, but The Big Bang Theory needs to work harder to justify CBS continuing to keep it on the air as anything more than a ratings cash-in.