Despite Warner Bros. and DC’s highly experimental, cinematically unproven Suicide Squad movie hitting theatres just fine this past August, and making a boatload of money in the end (negative reviews be damned!), it looks like the DC Extended Universe is still hitting snags with what is arguably one of its most anticipated movies at this point. The Flash, which is currently without a release date after a previous director loss forced it to vacate its March 2018 slot to Warner Bros.’ Tomb Raider movie reboot, has now lost its second planned director, with Dope helmer, Rick Famuyiwa also exiting the project as Seth Grahame-Smith did beforehand, citing, “Creative differences.” 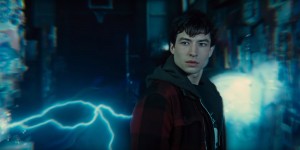 Despite the departure, Famuyiwa expressed a great love for the Flash property at DC, thanking Warner Bros. for the opportunity to helm the project, and work with Ezra Miller, whom Famuyiwa views as a very talented young actor. The Hollywood Reporter claims that the alleged creative differences came from Warner Bros. and DC Entertainment pushing for a light-hearted and upbeat movie, while Famuyiwa allegedly wanted an edgier production, though one still made with a sense of humour. It seems like the two parties just couldn’t agree on an exact vision, which is a shame. Considering the DC Extended Universe’s frequent criticism of being overly dark and brooding so far however (something that Suicide Squad somewhat alleviated with its higher emphasis on humour), it’s unsurprising that Warner Bros. in particular would want to move firmly away from the DCEU’s darker origins with Man of Steel and Batman v Superman: Dawn of Justice most notably.

Ezra Miller has already debuted the big screen incarnation of Barry Allen/The Flash with some small cameo appearances in Batman v Superman: Dawn of Justice and Suicide Squad, and will have a proper main role as the high-speed superhero in next year’s ensemble Justice League movie, before spinning off into his own solo film franchise. Kiersey Clemons is also set to star in the Flash movie as love interest, Iris West, with Billy Crudup portraying Barry’s father, Henry Allen, and Ray Fisher appearing as another DC hero, Cyborg, a character that was also teased with a cameo in Batman v Superman: Dawn of Justice, and one that will have a lead role in Justice League alongside Flash next year. The other personalities in the Flash movie, most notably the villains, are currently unknown, though an alleged leaked cast list claims that the main villain of the movie is Barry’s familiar DC Comics arch-nemesis, Eobard Thawne/Reverse Flash, with the studio allegedly courting Matthew McConaughey as an early frontrunner for the part. The same cast list also claims that another of the biggest familiar Flash foes from DC lore, Captain Cold, will be a key antagonist in the movie as well, with a pre-Captain Cold Leonard “Len” Snart allegedly being hired muscle for Thawne, likely to lay the groundwork for potential sequels.

Despite the Flash movie’s frequent setbacks, the entirely separate Flash television series on The CW continues to be a huge success for Warner Bros. and DC, being the highest-rated and often best-received show on the network at present. On that series, the titular character is portrayed by Grant Gustin, whom fans lobbied for as the lead for the Flash movie, though Warner Bros. dismissed the idea, wanting to avoid confusion between the distinct DC Extended Universe of the movies, and The CW’s shared ‘DC Television Universe’ or ‘Arrowverse’ that bears no connection to the world of DC’s movies. This is in stark contrast to competitor, Marvel’s strategy with the shared Marvel Cinematic Universe, which unites all of Marvel’s in-house movies and television shows within the same world and canon.

Keep speeding to Eggplante for all major news and updates on The Flash, and other movie projects in the DC Extended Universe.