Supergirl, like competing DC Comics series, Gotham on FOX, has been enjoying quite the Monday night hot streak in recent weeks, yet also like Gotham, that hot streak was noticeably disturbed with this week’s episode, “Survivors.” There was still plenty of great character interactions to go around, and no shortage of fun with the continued development of Mon-El especially, but a disappointing villain debut, and a core concept that ultimately failed to excite, somewhat hurt this week’s Supergirl episode in the end.

The core conflict of this week involves Alex and Maggie discovering the existence of an alien fight club, where National City’s most rich and elite citizens come together to watch extra-terrestrials fight in brutal competition. This fight club is fittingly run by Veronica Sinclair, a.k.a. Roulette, a recognizable DC Comics super-villainess who often serves as a foe of the Justice Society of America in the printed panels. In DC lore, Roulette normally supervises metahuman fights, but the idea of having her supervise alien battles was an inspired one for her debut on Supergirl. 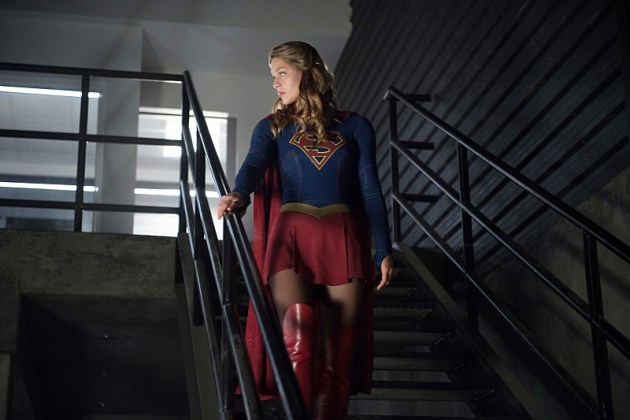 The disappointing element came from how surprisingly little this fight club idea led to real quality action though. Every battle felt too short and rushed through, in an episode that was ultimately a lot more focused on building character than it was on building thrills. Dichen Lachman managed to deliver a pretty good guest performance as Roulette, after formerly playing another major antagonist on Marvel’s and ABC’s Agents of S.H.I.E.L.D. series, but her operation felt too contrived and easily stopped, despite Roulette taunting Supergirl about how unstoppable she apparently is. Sure, Roulette does go free at the end of the episode, since it’s sort of clumsily implied that she’s affiliated with Cadmus, who seemingly bail her out with the NCPD, but for a villain that fits very well into the Supergirl universe, she didn’t make as much of an impact here as she truly could have.

This is similarly true of a subplot involving Hank, which somewhat ties into the main plot. Hank tries to get to know M’Gann, or Megan, as she goes by in her civilian identity, but Megan proves distant, and refuses to meld minds with Hank, as Martian culture considers to be a sign of trust. It later comes out that Megan is a regular champion of Roulette’s alien fight club, which seems sort of interesting, though she never comes off as truly ruthless or threatening. Megan even admits to Hank later that she refuses to kill her opponents, making it questionable that she could ever be so popular in Roulette’s circles.

The promise of a climax where Hank and Megan have to fight each other is also squandered, since Megan so quickly gives up trying to fight Hank, who refuses to fight to begin with. This otherwise heart-wrenching fight to the death is then just simply interrupted by Draaga, another recognizable alien from DC Comics lore, who is quickly taken out by Supergirl after some easy advice from Mon-El, before the NCPD conveniently arrest Roulette and drive away the other fight club attendees. This conflict could have played so well off of last week’s events with the Alien Amnesty Act, but it just never effectively got off the ground. At least the ending twist of Megan actually being a White Martian was great though, and fully in line with Miss Martian’s backstory from DC Comics lore as well.

The continued development with Alex and Maggie proved plenty satisfying too, and these two are quickly becoming a charming pair. The scene where they both talk over the evidence of a dead alien and conveniently forget about Supergirl right next to them was one of the funniest moments of this week (though there was another strong runner-up with Winn and Mon-El!), and when Alex is brought around Roulette’s secret operation by Maggie, it’s looking all but outright declared that Alex is indeed developing an attraction to Maggie. The disappointment on Alex’s face when Maggie reveals that she has a girlfriend is very noticeable, and it’s even equally disappointing to the viewer, since Alex and Maggie seem to have such great chemistry together. I’m sure that Alex will get her shot later, but having the show reveal Alex as a lesbian, or at least bisexual, presents lots of great story promise, and could explain how Alex ultimately got over her resentment of Kara, since she herself had to have dealt with a fair amount of isolation and alienation when she came out.

Probably the most entertaining story arc of this week’s episode though, as I said, belonged to Mon-El. After Mon-El is forcibly kept at the DEO for observation and training, he decides that he’s desperate to get out and explore the world, eventually talking Winn into taking him to a local bar. This episode greatly established that Daxam is a world of partiers and hedonists, and the montage of Mon-El and Winn drinking together was very funny stuff indeed! It was nonetheless cool to have these actions end in real consequences though, as Mon-El accidentally injures two men that attempt to fight him, and Winn is easily caught for his misdeed due to his blatant hangover. Kara using the incident as a catalyst to integrate Mon-El into the world as she learned for herself was a good way to capitalize on the fun, and the budding friendship between Kara and Mon-El does seem to be flourishing nicely overall.

In the end, despite some of the story stumbles, this week’s episode of Supergirl remained entertaining and mostly satisfying. Roulette coming back to profit off of National City’s underbelly again feels inevitable, but it’s too bad that she wasn’t given a better storyline to make her debut with. The character dynamics managed to elevate the episode where the core villain plot failed to though, and the idea of Kara getting to fulfill her original purpose of looking after her cousin with Mon-El is something that should nicely fill out the season’s next few episodes. Hopefully the next baddie that Supergirl and the DEO face is a little more truly dangerous though.