Lucifer continues to be a very successful new television series for FOX, despite the network initially only commissioning a 13-episode second season to start. With the success from Season One’s debut at the start of this year still growing though, FOX has now gone ahead and extended the episode order for Lucifer’s second season, ordering an additional nine episodes, which brings Season Two up to a proper 22-episode count for this season. 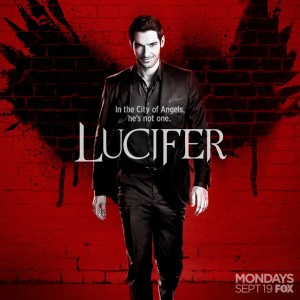 Addressing the extended episode order, FOX praised the show’s lead cast for their efforts in making the series so entertaining, which currently includes Tom Ellis as Lucifer Morningstar, Lauren German as Chloe Decker, Lesley-Ann Brandt as Mazikeen/Maze, Rachael Harris as Dr. Linda Martin, D.B. Woodside as Amenadiel, Aimee Garcia as Ella Lopez, and Kevin Alejandro as Dan Espinoza. FOX also revealed that Lucifer averages over 8 million viewers across all platforms per episode, placing it around the 4th-5th-highest-rated show on the network at present, with a +105% jump vs. Live + Same Day rankings. The network also declared that Lucifer is working as the perfect TV companion to fellow DC Comics series, Gotham on Monday nights, with Gotham being another ratings giant for FOX at present.

Lucifer is loosely adapted from the series of graphic novels published under DC Comics’ Vertigo imprint, which serve as a spin-off series to arguably one of the most celebrated Vertigo comics, Sandman. The television adaptation, similar to the source comics, is founded on the story hook of Lucifer Morningstar, The Devil himself, growing tired of ruling Hell and running off to Los Angeles to open a nightclub (piano bar in the comics), called Lux. While the source comics were more fantastical, and had a small connection to the wider DC Universe (Superman even served as one of Lucifer’s temporary replacements as Hell’s ruler at one point in the comics’ canon), the TV series bears no wider connection to any kind of DC Universe, and is instead a hybrid sitcom/police procedural series, where Lucifer gets his kicks by teaming up with LAPD detective, Chloe Decker to catch and punish criminals. Aside from Lucifer, the only other series lead that is also present in the source comics is Mazikeen/Maze, Lucifer’s right-hand enforcer and torturer that left Hell with him, and Amenadiel, the ambassador of Heaven and Lucifer’s brother, who demands he return to his station as ruler of Hell.

Lucifer airs from 9:00-10:00 P.M. EST on Monday nights, on CTV for us Canadians, and FOX for the U.S. It is one of three Vertigo-inspired shows currently on the air, with the other two being The CW’s iZombie, which is on hiatus until 2017, and AMC’s Preacher, which airs during Summer.

Keep summoning Eggplante for all major news and updates on Lucifer, and other television projects from Vertigo and DC.