Many discerning enthusiasts of Japanese gaming have come to fall in love with the cult hit Zero Escape games, which blend tense escape-the-room-style puzzle-solving with dark and twisted narratives that unfold across many potential player paths. Despite the apparent conclusion of the Zero Escape trilogy this year however, a new release was announced for the series today by Aksys Games and Spike Chunsoft, who will be bringing Zero Escape: The Nonary Games to PlayStation 4 and PlayStation Vita in Spring 2017. 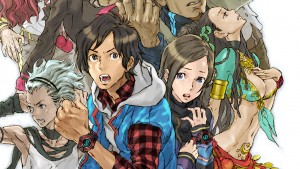 Zero Escape: The Nonary Games is not an all-new series entry, somewhat disappointingly, though it is a remastering of the series’ first two games, 999: Nine Hours, Nine Persons, Nine Doors, and Zero Escape: Virtue’s Last Reward. The series’ third game, Zero Time Dilemma, which released for Nintendo 3DS, PlayStation Vita and PC this past Summer, appears to be absent from the bundle, possibly due to it being released quite recently. The collection promises a high-definition visual revamp and both English and Japanese voiceover track options for 999: Nine Hours, Nine Persons, Nine Doors, though it doesn’t yet appear that any upgrades are being made for Zero Escape: Virtue’s Last Reward. That’s not much of an issue for PlayStation 4 owners though, as this collection will be the first time that either game is made available on Sony’s current console, though Zero Escape: Virtue’s Last Reward has been separately available for PlayStation Vita since 2012.

999: Nine Hours, Nine Persons, Nine Doors originally released in 2009 in Japan, and 2010 in North America, as a Nintendo DS exclusive, which later received a gameplay-less, story-only rendition for iOS in 2014. The game was extensively praised by critics, and found a cult audience, despite low sales in many territories. The same was true of its sequel, Zero Escape: Virtue’s Last Reward (999 didn’t bear the ‘Zero Escape‘ branding in its initial print run, only adopting it after a reprint with new box art), which released for Nintendo 3DS and PlayStation Vita simultaneously in 2012. The low sales of Zero Escape: Virtue’s Last Reward left the planned third and final installment in the trilogy in limbo for several years, though a steady push of fan demand, likely alongside the big surprise success of developer, Spike Chunsoft’s similar Danganronpa games, eventually motivated Spike Chunsoft and Aksys Games to see through the release of Zero Time Dilemma this year, which was once again widely praised by critics, and met with slightly higher sales than its predecessors.

Keep mystifying Eggplante for all major news and updates on Zero Escape.