With Doctor Strange hitting theatres this Friday in North America, it’s surprising to see that Agents of S.H.I.E.L.D. doesn’t seem to be that concerned with leading into Marvel Studios’ next blockbuster movie in this week’s episode. Nonetheless, “The Good Samaritan” was a superb episode that effectively tied up some of the season’s ongoing story elements, while amping up the current conflict to new heights. Most importantly though, this is the episode where we finally discover how Robbie Reyes became Ghost Rider, and where everything lands by the end of this episode is bound to shock viewers in several respects!

The twist of Jeffrey Mace being blackmailed by Senator Nadeer at the end of last week’s episode seems to be being saved for later, though the condition of the blackmail does seem to have one key component; Jemma Simmons. Jeffrey gives Simmons a shroud and tells her that she’s going to be forced on assignment on a top secret Inhuman-related mission for the government. If I had to guess, I’d say that Nadeer is going to try and coerce Simmons into fixing what is likely her husband in the unbroken Inhuman husk that she’s keeping safe and preserved. Whatever the case though, Simmons is quickly removed from the episode at the start, though fortunately, the other characters still found plenty to do. 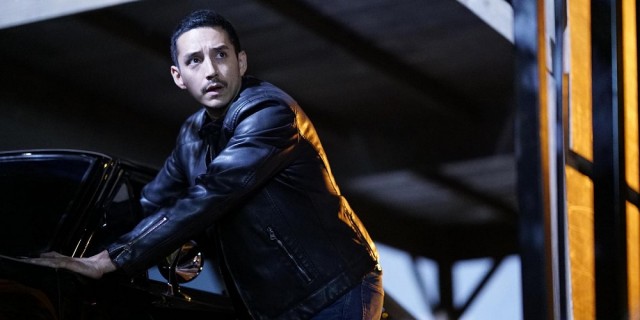 Jeffrey certainly isn’t letting the blackmail effort go undeterred as well, since he quickly goes to Coulson’s flying base, and demands that Coulson and co. turn over Daisy and Robbie, whom they’re harbouring, now along with Gabe. Thinking quickly, Coulson stashes the trio in a containment module just below the plane, while the rest of the agents get annoyed at the director’s people poking around their affairs. This mostly results in some clever humour, as well as some chipper, but tense interactions between the current director and former director of S.H.I.E.L.D., and what’s particularly telling is when Coulson implies to Jeffrey that he now seems to prefer working outside of S.H.I.E.L.D. protocol, at least to a point.

With Daisy, Gabe and Robbie stuck in the containment module for now though, an excuse is provided for Robbie to finally come clean about his secret to Gabe. This allows viewers to finally witness the events that led to Robbie becoming the Marvel Cinematic Universe’s Ghost Rider, as we see Robbie agreeing to sneak Gabe off to a race in Uncle Eli’s souped-up Charger some time ago, only to be attacked by the 5th Street Locos. We now know that this was a botched hit that was meant to be carried out on Eli Morrow, with his nephews becoming targets by mistake, because they were in Eli’s car. When Gabe wakes up after a car wreck and finds that he can’t move or feel his legs, he is pulled out of the car by an unknown, “Good Samaritan”, who also touches Robbie, with Robbie then stirring to life. That’s how Gabe remembers the incident, and at first, it seems pretty straightfoward… But then Robbie fills in a few blanks. 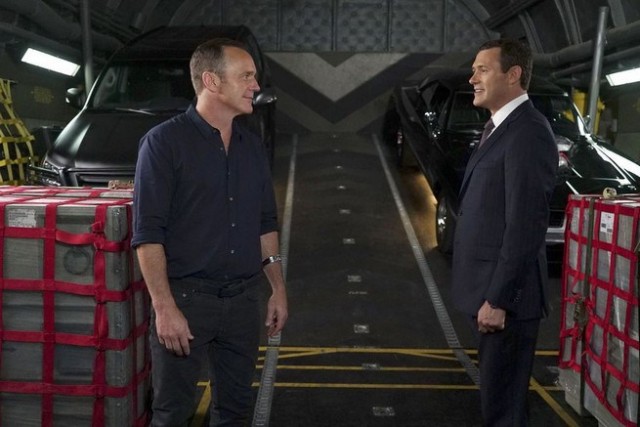 This is the moment of truth that many viewers have been waiting for, since it’s revealed that Robbie did indeed die in this car wreck caused by the gangsters, and that as he flew through the air before hitting the pavement, he begged any deity that would listen to spare Gabe’s life. When Robbie died, he heard a voice asking him if he wanted to avenge his own death, take revenge on his attackers, and exact vengeance on those that would spill the blood of the innocent. Since Robbie agreed, the mysterious stranger that approached him and brought him back to life effectively passed on the mantle of Ghost Rider to Robbie, and thus, he took up the cause of burning the souls of gangsters in Los Angeles! The iconic motorcycle, leather jacket and flaming skull that are clearly visible on the, “Good Samaritan” also seem to suggest that, rather than being ‘The Devil’, this person was actually a former Ghost Rider himself. Could this actually be the Johnny Blaze of the MCU, or maybe Danny Ketch? I know I predicted that Marvel wouldn’t use Blaze to avoid confusion with the Fantastic Four’s Johnny Storm, should they get the Fantastic Four rights back soon, but this could be a clever way to acknowledge the existence of the classic Ghost Rider in the MCU, as well as establishing that, like in Marvel Comics lore, the Ghost Rider mantle is passed between various hosts.

Obviously, it’s not long before Jeffrey sniffs out Robbie, Gabe and Daisy however, and after bringing them up in the containment module, they’re shocked to see that Ghost Rider is able to escape containment! There’s a brief scuffle between Jeffrey and Ghost Rider, though one slight gripe is that it doesn’t last very long, with Robbie quickly gaining the upper hand, and repeatedly punching Jeffrey senseless. Gabe’s voice gets Robbie to calm down and de-Rider, though this predictably has the team soured on the idea of bringing Robbie along for the final showdown against Lucy. Coulson manages to convince Jeffrey and May to team up with Robbie one last time however, and close in on Lucy as she brings Eli to an abandoned Roxxon power plant. On this note, it was very cool to have this episode build on events from the second season of Agent Carter from last Winter, as Fitz figures out Lucy’s plan and destination by sniffing into old SSR files that documented the study of Zero Matter (now also labelled by its proper Marvel name, ‘Darkforce’), and the existence of Isodyne, the scientific firm from Agent Carter’s second season that was apparently acquired off-screen by Roxxon in the 1950’s. 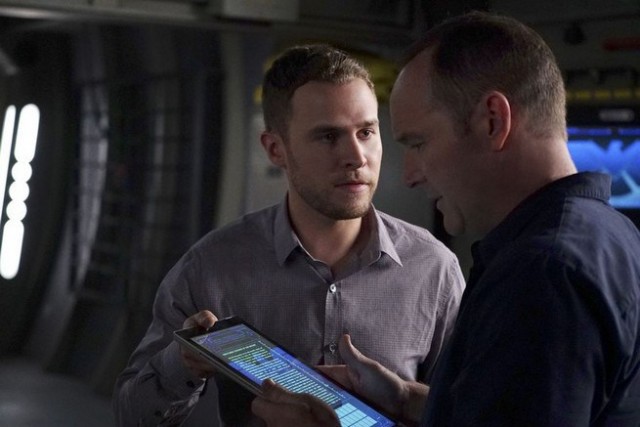 There’s one last big surprise in this episode too, amid a standout final push that has Coulson, Fitz, Mack, May and Robbie all closing in on Lucy and Eli. Robbie manages to get ahold of Lucy, finally destroying her, though when Coulson reaches Eli, he’s shocked to learn that Eli actually wants the Darkhold for himself, and was the true villain of this ghostly incident the whole time! Avid Marvel fans may have predicted this, since Eli is a villain in Marvel Comics lore, though if you don’t indulge in the printed panels, this was a very cool turn. The episode delivered this big twist very effectively too, particularly as flashbacks that occasionally came up throughout the episode seemed to suggest that Lucy’s husband was the true perpetrator, before Eli declares to Coulson that he used Lucy to get his experiment on track. Mack manages to be outside the plant when he’s forced to find May to try and use one of the persistent EMP’s from the events of, “Uprising” a few weeks ago, but Coulson, Fitz and Robbie are all caught in a pulse by Eli’s experiment, which seems to make them disappear. I doubt that they’re dead, but a more pressing problem is the episode ending with Eli having natural alchemy-based powers. Well, that definitely can’t be good!

Agents of S.H.I.E.L.D. is going on hiatus for several weeks after this episode, not returning again until the end of the month, but if we have to wait an entire month for a new episode, this was at least a standout note to start that hiatus on. “The Good Samaritan” effectively filled in the remaining blanks with the Ghost Rider backstory, while providing a fitting and exciting conclusion to the battle against Lucy Bauer, and unmasking the true foe that was under S.H.I.E.L.D.’s and Robbie’s nose the whole time. With most of the team either missing or inaccessible now, it will be interesting to see where Agents of S.H.I.E.L.D. picks up from here on the 29th, especially since the series surprisingly ignored the opportunity to lay any direct groundwork for Doctor Strange in the end. It feels hair-raising to admit, but with Eli now wielding the foundation of the elements himself, those ghosts that have given Coulson’s crew so much trouble so far this season might actually be the calm before the storm!