After the group stumbled upon a new location to call home in the previous episode, this week’s episode was all about settling in. “The Power of Power” was at least a decent improvement over the noticeable filler episode that we got before, even if it still feels like the gang is still in a transitional phase when it comes to resolving old story arcs and finding new ones.

Things really do seem too good to be true when the survivors walk into the big, glowing building however, as it’s a fully sustainable office building with its own self-managing power and water. This leads to plenty of celebrations about frozen pizza and entire floors to live in, with only Lewis being something of a naysayer, thinking that it’s difficult to call an office building a home. When everyone overrules him though, everyone’s floors are picked out, and the entire crew seems keen to settle into a new paradise together.

Naturally though, this bliss can’t last, as the water and power prove to be unreliable, and the decorations seem unstable, with a chandelier nearly falling on top of Carol’s head. Phil immediately suspects that Lewis is sabotaging the new building so that the group will be forced to move on again, and starts poking into Lewis’ business, desperate to prove who is behind the disturbances in everyone’s comfort.

Phil immediately suspecting Lewis is kind of a stretch, since he has no hard proof that Lewis has the means, motive or opportunity to sabotage the building’s water, power or decorations, though considering that Phil definitely isn’t the sharpest tool in the shed, the shoe does fit to a point. It also seems predictable that Lewis isn’t the perpetrator though, with Carol being revealed as the guilty party towards the end. Carol’s reasons for sabotaging the building because it doesn’t fall in line with where she wanted to bear and raise children is sort of sweet, and Phil building Carol a house according to her dreams was actually one of the episode’s best and most heartwarming moments. Carol’s behaviour is pretty out-of-character, something that the other characters even point out, but at least it led to an appropriately sweet resolution, even if Phil is probably going to have to work hard to repair his already-tenuous friendship with Lewis in next week’s episode.

A subplot also unfolded with Todd, who is once again facing no shortage of romantic woes in his former love triangle. Yes, I say former, as Gail breaks up with Todd in this episode, believing that she’s finally ready to be alone again. This might help to explain why Gail suddenly wanted to splinter off from the rest of the group as a whole in the previous episode, even if that decision still feels too illogical. Still, perhaps streamlining Todd’s romantic arc is not a bad idea, especially with the show placing so much more emphasis on Melissa’s seemingly unfurling psychology lately.

There is a glimmer of hope with Melissa this week, as she finally gives Todd a hug and sincerely tells him how much he means to her, while shooting some chairs with a shotgun, but hey, it’s still another standout moment! It really seemed like Melissa was on the road to becoming a more stable person, despite her mental degradation and growing violence still being a bit poorly explained so far. Later however, Melissa descends into full-blown lunacy at the conclusion of the episode, where she burns all of her shirts off-screen, then tells Todd that she’s ready to have a baby. Uh, what? Maybe next week’s episode will start exploring and explaining Melissa’s behaviour a little better, but if she’s going to go this crazy, there needs to start being a rationale behind it, rather than just making Melissa kooky and violent for the sake of having a kooky and violent character. 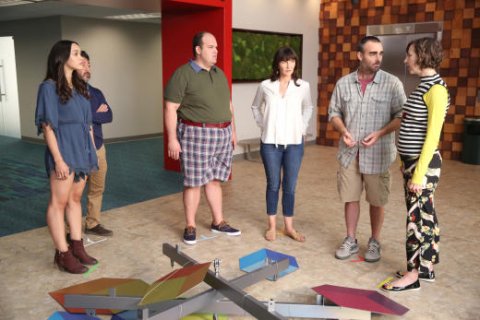 The Last Man on Earth hasn’t fully finished re-positioning itself just yet, but it seems to be forging a solid new path for the remainder of Season Three now, slowly but surely. It might have been more interesting to have a secret dweller that already lived in the building unseen trying to scare the group, rather than just an insecure Carol, but despite the trouble with Gail and Todd, many other characters grew closer this week. Whether or not they’ll truly be able to call this new building home is another question, but it looks like they’re on their way for now, even if they do need to resort to using fire sprinklers as showers.