Supergirl brought Project Cadmus directly back into the fold in this week’s episode, “Crossfire”, which had a group of human criminals being outfitted with alien weaponry. Normally, human gangsters wielding alien armaments is the style of Intergang, a DC Comics criminal organization that has already been referenced at least once as existing in the Supergirl universe. In the case of this episode though, these are just some random loose cannon idiots that Cadmus hires to give aliens a bad name, which is the first of many disappointments in what’s frankly a somewhat sub-par offering for Supergirl this week.

First and foremost is Cadmus continuing to suffer as being uninteresting villains so far. At the very end of the episode, it comes out that the mysterious leader happens to be Lena Luthor’s mother, and likely the currently-unseen Lex Luthor’s mother to boot, which will hopefully lead to better storylines later. For now though, Cadmus still don’t feel like truly competent or effective baddies. They’re just transparent fearmongers with a lot of resources. Even considering some of Non’s and Astra’s shortcomings from last season, at least a big faction of rogue Kryptonians felt like a clear and present danger to National City and Earth at large! 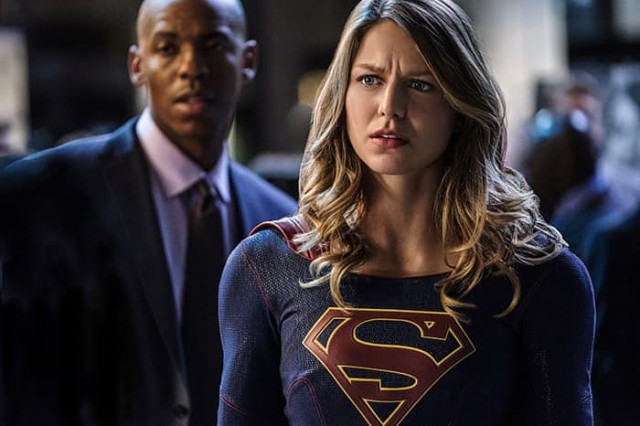 Oh, and while I’m on the subject, Cadmus’ plan this week was an incredibly stupid plan. What possible good could come out of handing alien tech to a bunch of petty criminals?! Yes, it will cause mayhem, but I seriously doubt that Cadmus could contain that mayhem to a point where it would do more good than harm. Also, how did they know that these morons wouldn’t be easily taken out by Supergirl? The fact that Kara didn’t wipe the floor with them often came down to uncharacteristic bravado and carelessness that the writing forced on our heroine this week, rather than an actual challenge from her foes.

Another serious flaw in this episode was James all of a sudden deciding that he wants to be a hero himself, which is allegedly triggered when our idiot villains run over his father’s camera and destroy it. The idea of making James a superhero himself, albeit one without powers, is one with some fair potential, though the way that it began here felt kind of rushed and sloppy. James tries to beat up on the criminals with the alien tech himself at one point, which almost makes him as dumb as Cadmus this week, and the rest of James’ arc comes from trying to convince Winn to assist him. Winn refuses however… Then just changes his mind for no reason at the end of the episode. Why? It’s sort of interesting to see James wanting to make a greater difference than he supposedly can at CatCo, but him suddenly having a death wish feels like a pretty huge leap, even if he is a supposed black belt. Plenty of people are black belts, James. That’s not nearly enough of a qualification to be a bona fide superhero, even by the standards of the DC Universe!

Fortunately, not every story arc this week was a bust, thankfully. There was both humour and heart in a civilian storyline with Kara, whereupon she tries to help Mon-El assimilate into Earth life by giving him a job as a CatCo intern. This goes about as well as planned, culminating in a very awkward situation where Kara catches Mon-El having sex with Eve Teschmacher (I guess having sex with Kryptonians/Daxamites in this universe is completely risk-free for humans, unlike most other Superman family media), and naturally, Mon-El is eventually fired. This immensely frustrates Kara, but Alex calling back to a childhood of trying to force Kara to fit in and live life the same way she does, and eventually having to let it go and realize that Kara is her own woman, was a smart and satisfying resolution to the storyline. I’m not sure if giving Mon-El free reign over any job in National City is necessarily the best idea, but at least Kara eventually grew a bit as both a mentor and a friend to Mon-El, who I hope finds a job that cutely leans into his partying ways in the coming episodes.

Another more successful storyline entirely revolved around Alex as well, as she realizes that she may just have romantic feelings for Maggie. Maggie’s girlfriend from the previous episode has conveniently broken up with her off-screen, and as the episode goes on, it becomes increasingly obvious that Alex is attracted to Maggie herself, eventually confessing it (in a way) towards the episode’s conclusion. The episode smartly addressed Alex allegedly being straight before now, by having Alex admit that she was never comfortable dating men, but finds a greater comfort in Maggie, suggesting that she’s either been full-blown gay without realizing it, or is perhaps bisexual or pansexual. Either way, Alex took a big step in admitting how she feels to Maggie, and I’m very interested to see how this relationship develops, since Alex and Maggie really do seem like a great pair. 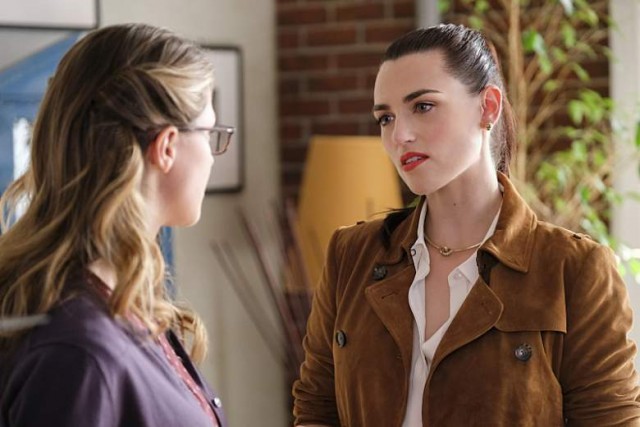 Despite the bright spots though, “Crossfire” still disappointed quite a bit, representing a shocking low point for what’s otherwise been a pretty strong second season for Supergirl before now. Hopefully next week’s episode gets the show back on its A-game, since it seems like The CW has a better handle on how to make this series most appealing compared to CBS. At least we can count our blessings and enjoy some positive developments though, namely that Alex is discovering a bold new side of herself, and Mon-El is on the path to finding his place on Earth. In fact, I’m not sure why Kara didn’t just let Mon-El work at that strip club. He’d no doubt be their best employee at the rate that he’s going!