Lucifer continued to carry on from Lucifer’s present grief, though mostly moved away from the titular character’s own demons in this week’s episode. “My Little Monkey” instead shifted the focus firmly to Chloe, who has a deeply personal connection to this week’s case-of-the-week, in that the murder victim is the man who was convicted of killing her late father, John Decker, a beat cop killed in a botched robbery.

The focus on Chloe led to another mostly strong episode, particularly when Chloe must face her own confusion and grief when she learns that the man convicted of murdering her father is apparently innocent. It might have been nice to carry this plot beyond this episode, though by the end, the real criminal is caught, and I’ll get to that moment later. Even in such a Chloe-centric episode though, there was fortunately plenty of other interesting character material to go around. 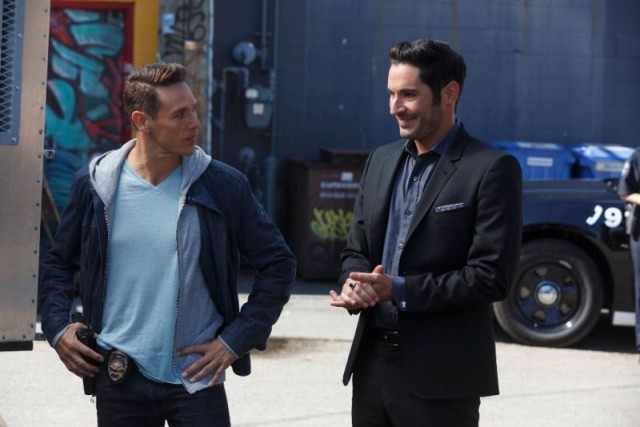 With most of the story focus on Chloe, a more experimental idea was attempted with Lucifer in this episode, wherein Lucifer tries to completely imitate Dan in terms of being boring and helpful. Lucifer still clearly blames himself not only for what happened with Uriel, but also for scaring Linda into a state of shock at the end of last week’s especially stellar episode, and that plays into another subplot with Maze later. There’s naturally a fair bit of humour derived from Lucifer trying to imitate the far more milquetoast and inoffensive Dan, though this angle isn’t quite as laugh-out-loud funny as you might think. It’s serviceable and gets the job done, but it doesn’t feel like it’s quite as funny as you may initially imagine, especially when Lucifer abandons the schtick before the episode is even over.

The best element of this storyline is how it leads into Lucifer trying to figure out Dan’s secret, eventually stalking him into a secret hideaway. Once seeing Dan inside, Lucifer learns that Dan does improv, and not only that, but he pretends to be Lucifer during his routines! This leads to an aggressive confrontation between the two men, but it ends in a fairly nice heart-to-heart moment that has these frenemies seeing eye-to-eye for once, at least outside of their taste in schlock-y action movies. Dan confiding in Lucifer about Chloe divorcing him was pretty effective, and in response, Lucifer found a surprisingly effective confidant in Dan when confessing his own pain, without actually revealing that he’s The Devil, of course. It was overall a nice moment, even if these two are bound to forget about it as soon as next week’s episode.

Meanwhile, the fallout with Linda continues to be explored, and as I said, this primarily unfolds with Maze. Maze tries to talk to Linda, who still seems to have barricaded herself in her office and refused any contact. When Linda tells Maze that she is a demon and they can’t be friends, Maze seems strangely hurt, which is out-of-character for her. In the end, it works though, since it comes out later that Maze sees Linda as her only friend on Earth, and is having trouble finding her current place in society. When Linda isn’t there for Maze for the first time, it does get to her, and seeing Maze face that vulnerability head-on was pretty interesting this week.

The episode does attempt to tie the Maze/Linda storyline into the Chloe storyline too, after Chloe discovers that the real perpetrator, who was paying criminals to take the fall for murders, was the prison warden. I have to say that this week’s case-of-the-week was very good, far better than most on Lucifer, though it was dragged down a tad by the abrupt, somewhat contrived ending. Maze catching the guy when he flees is sort of funny, but it doesn’t truly hold up to scrutiny, since Maze finding the warden in no time at all with just one off-screen visit to the LAPD feels pretty damn unrealistic, even for this character. Nonetheless, the new direction of Maze becoming a bounty hunter is actually kind of brilliant, and upon revealing her successful new job placement to Linda, she eventually convinces Linda to go out and have a drunk with her. As much as Maze can be a very aggressive, sometimes downright savage character, she’s come to embrace her own effective vulnerability this season so far, and it was really nice to see her get her happy ending with Linda in the end.

Like I said, it might have been nice to not have the whole John Decker conspiracy cleanly and neatly wrapped up after just one episode, but at least it still gave us one of this show’s best cases-of-the-week to date, especially when it also managed to launch Maze into a very promising new job. “My Little Monkey” was full of sweet moments too, whether it was between Lucifer and Dan, Chloe and Maze, Maze and Linda, Chloe and Trixie, and even Chloe and the falsely-convicted murder victim’s daughter at one point. There was no shortage of heart on Lucifer this week, and for once, the show taking a break from the supernatural story elements actually worked out fairly well. I’m sure that Amenadiel and Mama Morningstar will create trouble again next week, but it wasn’t so bad to see this show more effectively exploring its human side for a bit.

Lucifer 2.7: "My Little Monkey" Review
Lucifer spotlighted Chloe confronting a murder related to her past this week, in an enjoyable episode with lots of heartfelt moments.
THE GOOD STUFF
THE NOT-SO-GOOD STUFF
2016-11-08
84%Overall Score
Reader Rating: (3 Votes)
92%