The Big Bang Theory modified two of the pre-existing relationship states between its core characters this week, as Sheldon makes a surprising demand of Amy after a successful experiment, and Raj finds budding love in the most unlikely of places. “The Brain Bowl Incubation” was another pretty good episode, fortunately, with a nice dose of solid humour and effectively sweet moments for the most part, even as Raj is yet again shuffling his love interests for the umpteenth time.

Raj’s newest flame is a Cuban CalTech cleaning lady that stumbles upon him in the astronomy room, named Isabella. The two appear to hit it off, though Isabella keeps Raj at arm’s length, since she’s busy working two jobs, and doesn’t feel like she has time for dating. This motivates Raj to try even harder to get her attention however, as he resorts to cleaning bathrooms with her, and tries to plan impromptu dinner dates around her busy cleaning schedule, to the point where he cleans entire hallways to free up her time! When his friends ask however, Raj falsely claims that Isabella is an astronomer, not a cleaning lady. 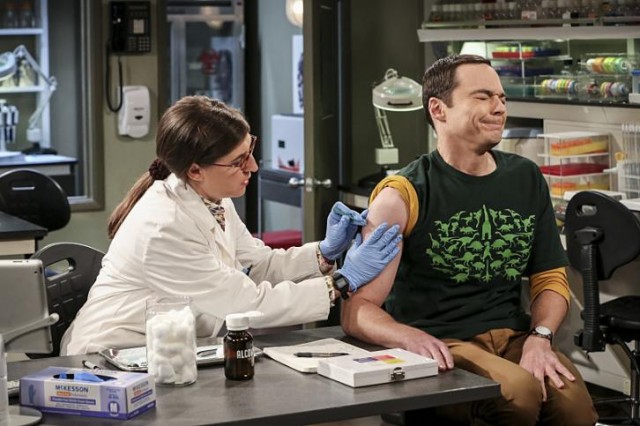 This has the episode making an interesting attempt to examine something that hasn’t as frequently come into play with Raj’s women for the most part; His wealthy upbringing. Sure, Raj has had a gold digger or two, but this is the first time that The Big Bang Theory has put Raj into the position of courting someone who is in the polar opposite station of life as him. Isabella is divorced, has a grown nineteen-year-old son that’s studying to be a lawyer at UCLA, and is barely making ends meet between two different jobs. She’s the complete opposite of someone like Raj, who, frankly, has had the vast majority of his life and privilege handed to him.

To an extent though, this episode does somewhat fumble the ball in terms of creating a new romantic conflict for Raj. Raj being disturbed by Isabella’s occupation, even sub-consciously, is never given any clear reasoning, and feels like a forced excuse to create a brief dark moment that doesn’t even last for more than two minutes. This comes from Howard blurting to Isabella that Raj told him that she was an astronomer, when he accidentally walks in on their astronomy room dinner, forcing Raj to try and explain himself. Raj gets a proper date in the end, though it might have been more effective if the show had better traced just why Raj would have such a problem dating a cleaning lady.

The other major storyline in this episode once again centered on Sheldon and Amy, as they build a basic nerve cluster out of their skin cells. Bernadette, Leonard and Penny are all left to merely serve up reactions this week (beyond Bernadette hilariously asserting to Sheldon that a baby is more complex than a brain in a bowl), but this once again has The Big Bang Theory benefiting from trimming the fat, and simply focusing on certain characters that lend themselves to strong, funny storytelling on any given week. This really applies to the big surprise demand of Sheldon after the successful experiment, partially inspired by the spirited debate with the pregnant Bernadette, where he decides that he and Amy should have a baby together!

As Amy quickly states, she’s nowhere near ready to have a child, and surprisingly, where it would normally go into more dramatic territory with this development, the show instead plays it completely for laughs, to surprisingly good effect. Sheldon tries an increasing range of ill-fated seduction attempts to try to convince Amy to procreate with him, all of which comically play up the fact that Sheldon is the least desirable man imaginable. The episode’s ending gag of Amy actually being successfully wooed by Sheldon doing Flamenco dancing was one of the best jokes too, as she pretends to be angry, but rushes out of the apartment to cool down and avoid temptation. We’ll never understand the Sheldon/Amy attraction and how it ticks, but hey, it’s probably better that way!

After struggling for a disappointing chunk of Season Ten so far, it feels like The Big Bang Theory is starting to slowly find better footing. “The Brain Bowl Incubation” once again had the show nicely focusing on good developments, offering cute and satisfying storylines for the Sheldon/Amy relationship, and for Raj. Raj’s storyline doesn’t completely go off without a hitch, and it’s too bad that most of the other characters were mere spectactors this week, but again, this tightly-focused, funny episode represents the show gradually finding a better direction after its early stumbles this season. It’s obviously far too soon to impregnate Amy, given that Bernadette hasn’t even had her baby yet, but in a way, it’s also tough not to root for the lovably inept Sheldon’s confused advances. Maybe someday, Sheldon, and God help that child!