UPDATE: The Hollywood Reporter has shed some further light on ABC’s and Marvel’s plans for the, “Inhumans” series, namely by revealing that the debut season is allegedly planned to comprise just eight episodes. This echoes the style of Marvel’s former ABC event series, “Agent Carter”, rather than the full-season length of, “Agents of S.H.I.E.L.D.” Also of interest is the fact that THR claims that the entire debut season of, “Inhumans” will be filmed with IMAX cameras, even though only the first two episodes are planned for IMAX theatres at this point. IMAX Corporation is also assisting with the promotion and funding for the, “Inhumans” series, marking the first time that IMAX Corporation has been creatively and commercially involved with the production of a live-action television show.

ABC and Marvel have just made a massive announcement that few people, if anyone at all, were probably expecting! Both companies issued a surprise press release today in relation to Marvel Studios’ previously planned Inhumans movie, which was removed from its June 12th, 2019 release date a while ago, namely that it’s no longer a movie! Instead, Inhumans is being re-tooled as a television series, which is being ordered straight-to-series, and will begin airing on ABC in Fall of 2017. This marks the second planned Marvel Studios movie to ultimately be converted into a television series, after Runaways also went into development hell, until it was recently re-announced as a TV series made for Hulu in the U.S., presumably being distributed on other streaming platforms for other territories. 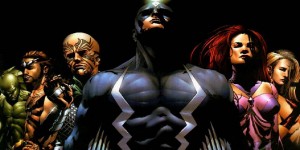 Joining the announcement of Inhumans coming to ABC was IMAX Corporation, who revealed an even bigger surprise; The first two episodes of Inhumans will be filmed entirely with IMAX cameras, and will debut in IMAX theatres next September, for a limited two-week engagement! This will presumably come shortly before the series proper begins airing on ABC in Fall, with ABC and Marvel revealing that, “Network-exclusive content” will be featured for the episodes’ ABC airings, though both declined to comment further on what exactly this means for now.

The Inhumans actually made their Marvel Cinematic Universe debut during the second season of ABC’s current syndicated Marvel series, Agents of S.H.I.E.L.D., where they have served as a spiritual stand-in for mutants in Marvel’s shared live-action universe ever since, having their powers activated by a substance called Terrigen as the key difference, whereas mutants in Marvel lore manifest their abilities naturally during puberty. The use of the Inhumans in this manner is something of a legal loophole, as mutants are currently off-limits for the MCU, on account of 20th Century Fox still holding the X-Men film rights.

We’ll be sure to keep an eye on this developing story, so keep activating Eggplante for all major news and updates on the Inhumans series, and other television projects for the Marvel Cinematic Universe.