Captain Barnes officially seems to be lost, with Gordon discovering his ill-fated victim in the alley at the end of last week’s episode of Gotham. This sets the stage for Gordon squaring off against his superior in this week’s episode, “The Executioner”, which largely stood on the strong Gordon/Barnes conflict, while a few other subplots failed to compare. This resulted in a somewhat uneven episode that felt like a bit of a filler offering, whenever Gordon wasn’t facing off against Barnes.

Gordon immediately opens an investigation into Barnes following the events of last week, though even Bullock doesn’t feel that he can support his partner on this decision. Gordon soon finds some convincing evidence that Barnes may not be himself though, and this really comes to a head when Barnes forces Gordon on an investigation with him, even letting Gordon question him without counsel. Barnes initially claims that he had nothing to do with the mob surgeon’s murder in the previous episode, though eventually, he shoots a witness in cold blood and drops the pretense, trying to force Gordon at gunpoint to clean up Gotham City with him, by killing the many guilty people that are dragging it down.

The way that Barnes’ psychological collapse played off of Gordon having to find his way back to the law was very inspired, with Barnes even cleverly referencing how Gordon once shot Theo Galavan in cold blood during the events of last season. Barnes has now become the very menace that he’s trying to clear out of Gotham City, and Gordon seeing the path that he’s managing to avoid lent itself to some great sequences that were equally dramatic and thrilling. The episode ending with a deranged Barnes being locked up in Arkham Asylum was also a satisfying conclusion, as was Gordon staring into the empty captains’ office, likely foreshadowing Gordon’s imminent promotion to the new GCPD captain.

Considering how great Gordon’s final takedown of Barnes was, it’s disappointing that the rest of the episode’s subplots felt noticeably less impressive. The show finally brought back the older Ivy, on the bright side, as she finally re-introduces herself to Selina, with Selina finally putting together that Ivy was aged by several years before being washed away. Maggie Geha seems to have fine-tuned her Ivy performance here as well, no longer being a more imposing villain for the most part, and instead having the child incarnation of Ivy that Clare Foley portrayed shining through more. Ivy still nicely foreshadowed her future super-villain identity as Poison Ivy around the start of the episode however, as she uses a crude precursor to her seduction dust to make a man open a treasure vault for her, so she can pilfer a big, valuable necklace. 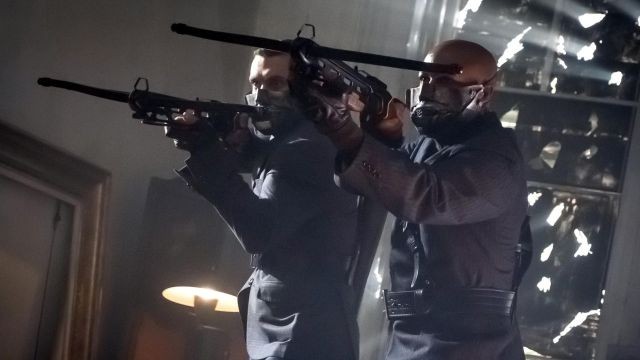 From here though, the rest of the Ivy subplot felt like a laboured excuse to bring the Court of Owls back into Bruce Wayne’s path. Bruce was otherwise wholly unnecessary within this storyline, as Bruce, Selina and Ivy end up being hunted by who appear to be Court of Owls enforcers, as they seek the necklace that Ivy stole. The Court enforcers instead seem to find a connection to Bruce in Selina’s hideaway in the end though, no doubt meaning that Bruce will be back in their crosshairs before long. I guess we all knew that was bound to happen.

The other major subplot this week dealt with Nygma and Penguin, as Nygma gets a call from the GCPD, telling him to identify someone in the morgue. Yes, Isabella was indeed killed by that oncoming train after the end of last week’s episode, with Penguin seeing his opportunity to finally try to win Nygma’s heart. Penguin, however, is more intent on moping, before Penguin inadvertently inspires him to piece together the events that led to Isabella’s death. Before long, Nygma puts together that it was indeed murder, after conducting his own investigation, seeing that the brake line on Isabella’s car was cut, and someone with a lot of money and influence paid off the GCPD to look the other way.

All in all though, this purely felt like a filler subplot, and frankly, I feel like it’s too early to get rid of Isabella at this point. Nygma will transparently be pitted against Penguin before long, even as he initially suspects Butch of being the man behind Isabella’s death, as revenge for Nygma exposing him as the recent leader of the Red Hood Gang. It’s honestly not a half-bad reason to suspect Butch! As much as the Penguin/Nygma romance initially held some promise though, it’s kind of starting to grate now. We know that Nygma will have to discover the truth sooner or later, and Penguin has pretty much no chance of getting what he wants at this point. By the end of Season Three’s front half, Penguin needs to have abandoned this pursuit, otherwise, it’s really overstaying its welcome.

Gotham’s only got a couple of episodes left before it begins its lengthy midseason hiatus, and it felt like the shiw had to expend this episode to start moving necessary story developments into place for the midseason finale in a couple of weeks. “The Executioner” at least completed the fall of Barnes with aplomb, but everything else felt disappointingly middling this week, as we prepare to move into the apparent climax of the, “Mad City” volume of Gotham. Already, it feels like the show is telegraphing its next big story turns too much. Penguin and Nygma are bound to become enemies, the Court of Owls is going to find its way back to Bruce, and Gordon will likely be captain of the GCPD before long. Hopefully, we get a few more curveballs before we see those inevitable developments come to pass.

Gotham 3.9: "The Executioner" Review
Gotham nicely wrapped up the Barnes conflict this week, though the rest of the storylines felt disappointingly middling.
THE GOOD STUFF
THE NOT-SO-GOOD STUFF
2016-11-15
74%Overall Score
Reader Rating: (1 Vote)
96%