The Walking Dead firmly brought Negan and The Saviors into Alexandria this week, to begin their campaign of swiping the survivors’ provisions, now that Rick’s crew is under their boot. “Service” was all about continuing to hammer home just how helpless Rick and his survivors truly are with the advent of Negan, and unfortunately, a lot of this episode, despite echoing the events of the source comics fairly closely for the first time in a while, felt too stretched-out and overdone. It certainly isn’t that overdone compared to the suffocatingly bleak season premiere, but still overdone by the standards of most The Walking Dead episodes overall.

The first and biggest problem of this episode is the fact that, like many of the extended episodes on this series, sadly, there’s really no reason for this episode to be 90 minutes long. Perhaps this was a way to properly realize an episode that is following the source comics a lot more closely, with quite a bit of the visual directing and dialogue recaptured verbatim from the comics (albeit with the language toned down, due to AMC not allowing f-bombs on this show and the like), but even so, it led to a tired and sometimes tedious plot that hammered on the exact same notes that Season Seven of The Walking Dead has already run into the ground now. Again, we get it. Negan is scary. Please make him more than a grinning psychopath, AMC! 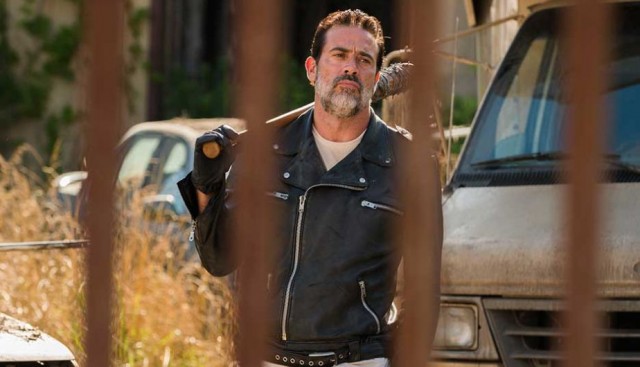 It’s annoying, because Jeffrey Dean Morgan is completely stealing every scene he’s in, but it feels like the show is already leaning on Negan’s unyielding playfulness as too much of a crutch. Many of the characters spend most of the episode beat-down and quiet, and Rick’s likely rebellious intentions aren’t conveyed directly in the TV series, despite being very apparent during these same events in the source comics. Instead, Rick just shuffles Negan around as he steals all of Alexandria’s guns, burns all of their mattresses, and screws with the town’s possessions. How exactly does that sell the idea that he’s a reasonable man? The guns I sort of understand, but even then, is Negan seriously going to leave his vital supplying town completely defenseless in the event of a Walker attack?

Granted, a few of the story turns were fairly interesting. It’s awesome to see Rosita finally taking charge and planning her own rebellion where Rick is being more subservient, managing to smuggle at least one gun for herself. Frankly, this is the most interesting that Rosita has been since she first showed up on this series, so hopefully the show keeps up this story thread. The show seems to be flirting with the idea of Alexandria splintering into two groups, with one following Rick to be completely subservient to Negan, while the rest try to put together their own revolt. Even Michonne and Carl, who were present when Negan brutally killed Abraham and Glenn during the season premiere, seem more inclined to rise up than Rick is.

To be fair, the show does somewhat manage to justify Rick wanting to avoid provoking Negan though, with Rick finally coming out and clarifying something that fans have speculated and put together for a while now; Judith is not Rick’s daughter, but Shane’s. Studying the timeline of the show seems to point to this same likelihood, and Rick recounting his acceptance of Judith as a daughter in the wake of Shane’s and Lori’s deaths to Michonne, made for a surprisingly decent way to explain why Alexandria needs to fall in line. Sometimes, it’s just all you can do when things get bad, even temporarily. It doesn’t seem like this revelation is truly enough to sway Michonne from the desire to rebel, especially as the episode ends with Michonne returning to the perch where she tries and fails to perform target practice on a Walker, but at least the story decently called back to the show’s origins with this reveal, as a way of making everything sort of come full circle with the mess that Rick ended up sticking Alexandria in.

Still, far too much of the episode was rehashed ideas, or just plain filler. Negan threatening to kill the gun inventory woman was fairly interesting, but got old pretty fast, especially when Rick inevitably finds the missing guns in the woman’s ledger hidden in a vent in Spencer’s house. Likewise, Rosita and Spencer going hunting for Daryl’s motorcycle felt pointless, especially when Dwight just takes the bike anyway. Oh, and speaking of Dwight, he’s now a plain and simple asshole again, with his positive development from the previous episode seemingly undone. That’s quite annoying. Lastly, Rick falsely claims that Maggie is dead, but obviously this is a lie, since there’s no way that she’d be killed off-screen. Sure enough, it’s revealed later that she is seeking medical care, no doubt at The Hilltop, which is where Sasha probably is too. That’s no doubt material for next week, but not getting the chance to check up on where Maggie and Sasha stand with the loss of Abraham and Glenn felt like a let-down.

There really isn’t much more to say about this episode either. The seemingly drawn-out 90-minute runtime starts out superbly, granted, as Negan makes his grand entrance into Alexandria and immediately starts laying down the law, almost exactly as he did in the source comics. From there though, almost the entire episode just reinforces the same notes from the season premiere, namely that Negan has thoroughly dominated Rick’s crew, and Rick is seemingly broken, insisting that everyone go along with Negan’s whims to have some kind of a life. Rick will inevitably rise up against Negan later, otherwise the show might as well end here, but for now, he did basically just keep his head down and seemingly bide his time, with the recognizable Rick Grimes that we know only coming out to transparently threaten Spencer, after he calls Rick out on ruining Alexandria.

Thus, “Service” is another disappointing extended episode of The Walking Dead that really didn’t need to occupy a 90-minute length. This episode is also another good example of how Negan is a great character, but when over-used, he starts to grate and become too unbelievable. At least Negan’s goons getting off on the sense of power sort of explains why they haven’t just killed the bastard themselves at this point, but if the show is honestly trying to make us think that Rick is ready to accept defeat here, it’s obvious that viewers aren’t going to buy it. As I’ve stressed numerous times, Negan is a lot of fun, in certain doses, but he needs to do more than push Rick around and smile like a jackass if he wants to realize his full potential as a villain.

The Walking Dead 7.4: "Service" Review
The Walking Dead fumbled yet another 90-minute episode this week, as a promising debut for Negan in Alexandria quickly gives way to the same old tired bullying.
THE GOOD STUFF
THE NOT-SO-GOOD STUFF
2016-11-14
71%Overall Score
Reader Rating: (0 Votes)
0%