Another major foe of Superman from DC Comics lore was brought into the Supergirl universe this week, as a radical climatologist accidentally comes into contact with an alien parasite. That parasite is, aptly enough, recurring Superman nemesis, Parasite from DC lore, only in the Supergirl universe, this is yet another Superman villain akin to Metallo, Toyman or Silver Banshee that has no history battling the Man of Steel in this canon, and is instead going straight into battle with Supergirl.

“Changing” made for a fairly strong episode of Supergirl overall, effectively making up for the frustrating misfire that last week’s episode mostly ended up being. Parasite’s introduction was cleverly woven into a timely global warming theme, which felt a little heavy-handed at times, but still made for an interesting new way to re-interpret Parasite and his motivations in this newest incarnation. Parasite’s motivations are a little muddy at times too though, since he seems to believe that killing some random suits will somehow save the world from his host’s anxieties, which then seems to lead into killing everyone, but wouldn’t that leave Parasite starving to death? Moreover, does the character want power, or want to save humanity? Frankly, it might have been more interesting if host, Rudy Jones had sort of directly ‘teamed up’ with the parasite, perhaps granting it power in exchange for the means to stop greenhouse gases, and ultimately making the mistake of letting the parasite grow too strong, and having it overtake him before sending him craving more power. That would have made more sense than Jones just wanting to kill some corporate jerks, and the parasite somehow having any investment in helping the race that is ultimately its food.

Unfortunately, the biggest sticking point in this episode however is once again James, whose desire to become a vigilante still feels like it’s coming mostly out of nowhere. James is a dicey character that Supergirl has often had a hard time finding an effective spot for, even in the noticeably improved Season Two, and that’s still very apparent with his somewhat awkward transformation into this universe’s version of Guardian, a smaller-tier hero from DC Comics lore. James trying to force Winn to expedite his new super-suit, and Winn trying to assert to James that he’s not helping anyone by having a death wish, was the one scene that felt effectively on-point with James’ character this week, but everything else about James becoming Guardian seemed really forced. The idea of James easily managing to hold his own against a huge, mutated rendition of Parasite in the episode’s climax, as his first battle test of the Guardian suit, is especially ludicrous, even if you consider that he had Mon-El’s help!

Speaking of Mon-El, the show once again had Mon-El on the hunt for a job, as well as training with Kara. Despite Kara deciding to meet Mon-El halfway and let him find his own destiny, it still feels like Kara is fairly assertively trying to force Mon-El onto a certain path, and that especially becomes evident when Mon-El reveals that he has a new job, only for Kara to later learn that Mon-El’s new job has him working as a debt collector for alien criminals. Naturally, Kara isn’t very impressed, which has Mon-El down in the dumps, though Alex eventually motivates the Daxamite to dig deeper and pick himself up, which he does in time for the admittedly cool final duel against Parasite with James and Kara. 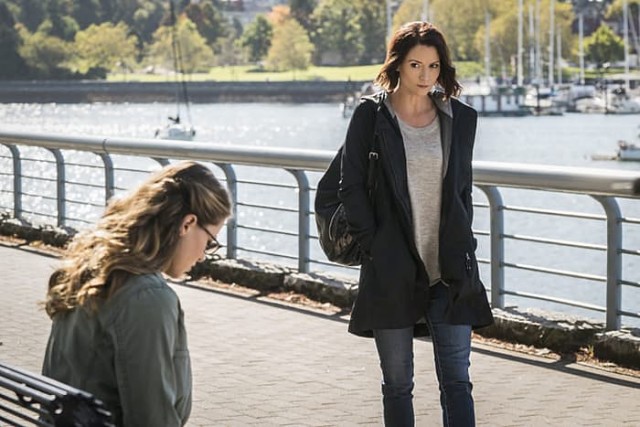 Alex was easily the highlight of this episode as well, as she starts to come to the realization that she might have always been a lesbian, and was simply repressing the memory of suspecting this until falling for Maggie. Alex seeking help from Maggie, coming out to Kara, and then Kara encouraging Alex to go for Maggie, only to have Maggie reject Alex out of a desire to stay friends, was a superbly emotional journey for Alex, and one that represented an effectively challenging new step for her character. I hope that the show doesn’t backpedal on Alex being a lesbian, as the episode ends with Alex devastated and refusing to go into work, instead hiding in her apartment and wallowing in self-pity (it’s a bit out-of-character, but I suppose that a coming out and subsequent rejection is a whole other can of worms, even for someone as tough as Alex), though it’s nonetheless easy to appreciate that Alex isn’t magically finding a happy ending, simply because she’s taking a vital step in her personal development. It would feel cheap if it were that easy.

Also effective in this episode was Kara and Hank both being responsible for Parasite’s mutation into his giant purple form, more in line with how the character appears in DC Comics lore, when he tries to feed off both of them at the same time. Kara eventually recovers with some yellow sun lamps, though Hank is in much worse shape, in desperate need of a blood transfusion. Obviously, that’s a tall order, since there are no Green Martians left, though Alex instead decides to convince M’gann to donate her blood so that she can save Hank. This does the trick, though a shaking hand and an uncertain M’gann quickly tease that Hank is about to rudely discover that he has White Martian blood in him now. M’gann did what she had to do, but will the cost truly be worth it? 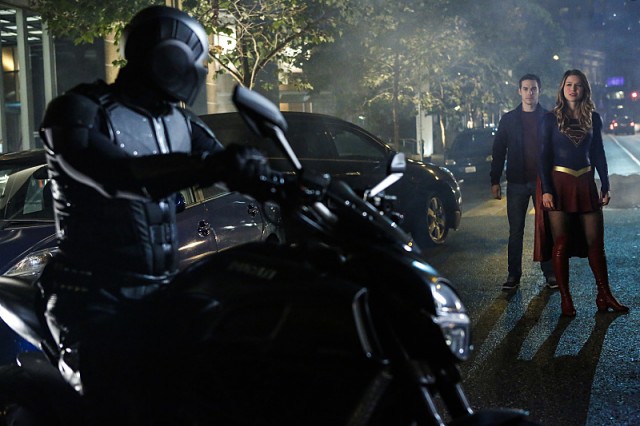 Things ending off with Mon-El being snatched up by Cadmus, when he tries to go to greater efforts to be a hero no less, sets up a pretty interesting tease for next week, where the next episode will likely give Supergirl a big, pivotal storyline, so it can be in a good position for the big four-show CW crossover with The Flash, Arrow and Legends of Tomorrow in a couple of weeks. “Changing” managed a solid new villain (even if he appears to be destroyed by the episode’s conclusion), some standout development for both Alex and Mon-El, and the first teases of Hank soon discovering the hard truth about M’gann. Overall, this led to an episode that was filled with humour and heart this week, with James and his forced Guardian transition being the main sticking point for the show at this point. Maybe James’ Guardian identity will come into its own more later in the season, though for now, he really needs to have a more credible and reasonable excuse to hit the streets and fight aliens.

Supergirl 2.6: "Changing" Review
Supergirl introduced another frequent Superman nemesis for Kara to good effect this week, though it was the character subplots that often shone the most.
THE GOOD STUFF
THE NOT-SO-GOOD STUFF
2016-11-15
85%Overall Score
Reader Rating: (1 Vote)
100%