It seems like The Big Bang Theory is gradually trying to slip Bert, CalTech’s geology researcher, into the series with increasing regularity, as if he’s the new Stuart. Bert had one of his biggest storylines on the show to date this week, with, “The Geology Elevation” tying his storyline directly to Sheldon’s latest struggle. Meanwhile, a subplot with the Wolowitz’s provided another amusing excuse to bring Dr. Stephen Hawking into the show, even if it was Sheldon and Bert that took center stage this week.

The core plot of the episode involves Bert receiving a MacArthur Fellowship Grant, with a monetary reward of $500,000, due to his outstanding work in the field of geology. This immediately has Sheldon envious, and wondering why Bert was given such an outstanding honour, since he doesn’t view geology as a real science. This provided several funny ways to bring out Sheldon’s petulant, child-like side, even if his struggling with the throes of envy sometimes worked to mixed effect.

When Sheldon was amusingly forced to confront the idea of being jealous of a man he holds in low regard, that’s when the episode’s jokes and insight tend to be at their best. A running gag where Sheldon constantly hurts himself in trying to let go of his anger sometimes felt a bit forced, and wasn’t quite as effective, though Sheldon developing something of an unlikely, begrudging friendship with Bert when he comes clean about being jealous, also made for a fairly satisfying final result to those reactions.

The same was true of Stephen Hawking’s latest cameo, with Hawking playing something of a part in both storylines, despite having the largest real bearing on the main plot with Sheldon and Bert. Hawking’s fictionalized, less mature portrayal on The Big Bang Theory continues to be a delight, even if he actually gives Sheldon the sage advice of considering every scientific advancement a win this time, and reminds Sheldon that he can’t waste time on jealousy because he’s too smart for that. Fortunately, this potent wisdom was also off-set by a new excuse for Hawking to get some good laughs, this time by bringing up several of his television cameos on shows like The Simpsons and Star Trek, which also played well off of the irony that he was making another television cameo on The Big Bang Theory in the process. 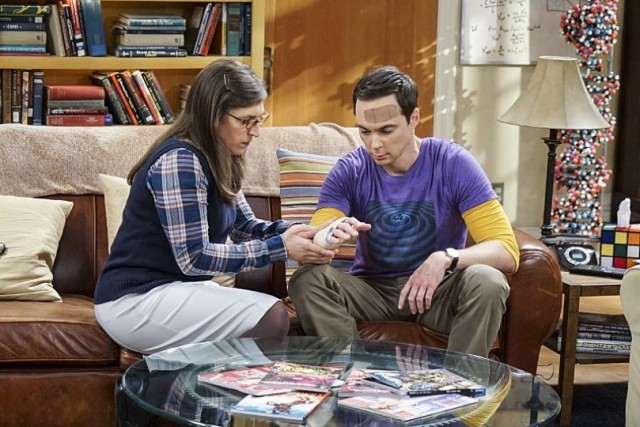 Despite some of the high points in this story though, it did tread a lot of well-worn ground with the Sheldon humour. This is no doubt a side effect of this show being on the air for ten years now, since it feels like The Big Bang Theory is starting to run out of ways to mock Sheldon being an insufferable man-child at this point, so it’s just repackaging old jokes and hoping the audience won’t notice. There were certainly enough laughs to get this episode by, but Bert and Hawking had to be relied on for a lot of the humour’s freshness, even if Leonard and Penny still managed some solid laughs themselves here and there, when they both try to set Sheldon straight in their own ways. Speaking of Penny, the show bringing up the negative audience reception to Penny’s short hair in Season Eight was also one of this episode’s highlight jokes, as her friends confess that they never liked it, leading to Penny saying that Howard is the one with the worst haircut, something that no one cares about. This was a funny way to point out how the guys get away with never changing their hair or fashion sense, despite their supposed personal growth over ten years, a rare example of a joke that actually does get funnier when a show has been airing for a longer period of time.

The subplot of the episode, whereupon Howard finds a motorized toy of Stephen Hawking that he made several years ago, complete with Hawking’s real-life artificial voice, is kind of funny, though mostly just exists to fill space in the episode. Bernadette decides that the toy is offensive, leading to Howard and Raj asking several people if it’s offensive, then when Kripke says he loves the toy, they decide it’s offensive. That’s the entire subplot. Granted, this subplot serving as a foundation for a joke later, where Hawking tells Sheldon that he thinks a motorized toy of himself would be very cool, is a pretty funny final result, but it’s disappointing that this entire subplot only existed to set up another gag in the core Sheldon/Bert storyline.

I don’t mind the idea of The Big Bang Theory cultivating another recurring personality in Bert, since, “The Geology Elevation” managed to do pretty well with its main storyline, continuing to keep Season Ten at a steady hover, after it’s mostly struggled until a couple of weeks ago. This was disappointingly another episode that did draw attention to this sitcom’s advanced age though, since it relied on a lot of canned Sheldon humour, and a subplot that didn’t really feel all that effectively fleshed-out in the end. Sheldon and Bert sitting in on a taping of Ellen together in the epilogue does seem to suggest that Sheldon will have a well-meaning new frenemy in the season to come however, and I do hope that this leads to more funny storylines later. I’m sure that Howard could use the next nomination for a MacArthur grant too, hopefully avoiding a new batch of Sheldon injuries if that comes to pass!

The Big Bang Theory 10.9: "The Geology Elevation" Review
The Big Bang Theory made its biggest push to including Bert as a recurring personality this week, which mostly worked to good effect in the core Sheldon plot.
THE GOOD STUFF
THE NOT-SO-GOOD STUFF
2016-11-18
78%Overall Score
Reader Rating: (0 Votes)
0%