Gotham is continuing to move its pieces into place for next week’s midseason finale, leading to another episode this week that largely felt like it was building up to future events and little else. “Time Bomb” actually covered its ground pretty well, finding uses for just about all of the show’s current lead personalities, though not every story element felt like it fully succeeded, with some feeling rushed through, and others feeling like a bit of a waste of time.

Among the best storylines of this week’s episode was the core plot with Gordon and the Falcone family. After a car bomb narrowly avoids Carmine Falcone, Gordon begins an investigation to discover who is targeting Gotham City’s former most dangerous crime boss. Before long though, Gordon, with some help from Bullock, discovers that Mario Falcone is actually the target, leading to Gordon having to start protecting the man who is about to marry the woman he loves.

Seeing Bullock become acting captain of the GCPD was a decent curveball, since it avoided the low-hanging fruit of just putting Gordon in the captain’s chair already, as will inevitably happen at some point on this show. Even being an acting captain, seeing Bullock still get some great moments with Gordon around the precinct was pretty satisfying, and their great case-working rapport is something that I really hope the show never sacrifices as Gordon begins moving up the GCPD ranks. Even considering some of the flaws that have been maintained in the, “Mad City” volume of Gotham episodes, I do have to say that the character work with Gordon is some of the best we’ve seen to date, and surprisingly, Gordon having to watch Leslie marry someone else has avoided becoming grating for the most part.

Another satisfying turn came with the gradual unraveling of a dark secret with Mario, who is becoming even more jealous and unhinged. This was really conspicuous and out-of-place at first, but as Carmine Falcone employs his own methods of getting to the bottom of what’s going on, it becomes apparent that something is very wrong with Mario, and it’s definitely having an effect on his psychology. When Mario witnesses Leslie paying one last visit to Gordon’s place before her wedding however, we learn the answer, when some unfortunate muggers get more than they bargained for; Somehow, someway, Mario has become infected with Alice Tetch’s blood. Considering that Mario is a doctor, this infection makes sense, and setting up Mario for a big showdown with Gordon in the midseason finale is something with a considerable amount of promise for next week.

It was also inevitable that the show would find some way to work Bruce back into conflict with the Court of Owls, and that started coming into motion this week, after Alfred agrees to hide Selina and Ivy in Wayne Manor. After Ivy exploits her suggestive homemade perfume on Alfred however, she walks out, only to be caught by some thugs, who say they’ll trade her for the mysterious key in Bruce’s possession. This happens to come right as Selina tries a scientific solution that reveals that the key belongs to none other than the Court of Owls, initially leading Bruce into thinking that he’ll have to explain himself at the exchange. 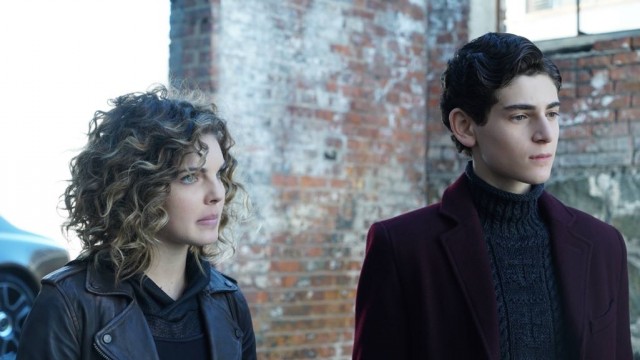 Another subplot that felt sort of disappointing was the Nygma subplot, which felt like one giant wild goose chase that was stretched out too long. Barbara was at least a lot of fun this week, as she crashes a meeting of Penguin’s, before bribing a maid to learn about Penguin being in love with Nygma. Meanwhile, Nygma tortures Butch, and sets up a crude machine to chop off Tabitha’s hand if she doesn’t kill Butch herself. This seemed nicely intense at first, though Tabitha unrealistically letting the machine take her hand off, mere seconds after telling Butch that she’s not one to fall in love with anyone at this point, felt really illogical. What was equally illogical was Butch then giving a fake confession that reveals to Nygma that Butch is innocent, which viewers knew the entire time. All of this simply served as a roundabout way to put Barbara and Butch in cahoots with each other, so that they can start a mob war to bring Penguin down. That’s fair enough, but Nygma is no closer to getting justice for Isabella, and if they’re just going to re-attach Tabitha’s hand anyway, what was the point of her unrealistically maiming herself over a man that she claims not to love? If she does love Butch, why not just say that? This just isn’t adding up.

Gotham has the potential for a pretty explosive midseason finale next week, so hopefully it realizes that potential, considering we’ve had to sit through at least two episodes’ worth of setup to get there. “Time Bomb” is at least continuing to do right by Gordon’s leading presence, though even if none of the lead personalities felt neglected this week, not all of them were given worthy storylines that effectively moved their character arcs forward. We can even see indications of what’s to come already, as the show continues to telegraph and tip its hand to story turns that will obviously come into play later, whether it’s Nygma ending up against Penguin, Bruce ending up against the Court of Owls, or Gordon having to battle Mario for Leslie’s love somehow. There’s still room to surprise though, and if next week’s midseason finale manages to do something great with this wind-up, it will at least begin Gotham’s lengthy midseason hiatus with plenty of excitement to buzz over.