Fans were very excited at today’s PlayStation Experience keynote to see the WipEout series make a surprise return! WipEout: Omega Collection was unveiled for PlayStation 4 at the showcase, which will compile three of the series’ most recent games, WipEout HD, WipEout Fury and WipEout 2048. WipEout Fury is technically an expansion to WipEout HD, but its inclusion is nonetheless exciting. 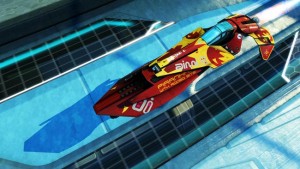 Sony’s futuristic gravity-defying racer series has been quiet since WipEout 2048 originally released for PlayStation Vita in 2012. While it’s not an all-new entry, WipEout: Omega Collection will bring the series to PlayStation 4 for the first time, with Sony Interactive Entertainment overseeing the collection. The now-shuttered Sony Liverpool was formerly the overseer of the WipEout series, though the studio was shut down by Sony’s higher-ups shortly after the release of WipEout 2048 in 2012.

WipEout: Omega Collection will release exclusively for PlayStation 4 in Summer 2017.

Keep racing to Eggplante for all major news and updates on WipEout.