Arrow is certainly cultivating a lot of renewed momentum, now that Season Five has properly hit its stride. Coming off of the exceptional 100th episode that also aired smack in the middle of the big, “Invasion!” crossover last week, “What We Leave Behind” served as a superb midseason finale for the series, which upped the emotional stakes for Team Arrow, while also providing a fresh set of dramatic obstacles for Oliver’s crew as Arrow begins its Winter hiatus.

After Curtis gets attacked by Prometheus outside of Oliver’s mayoral Christmas party, it becomes apparent to the team that Prometheus is well aware of their secret identities, and is now able to easily target all of them. This also leads to Curtis’ husband and Felicity’s boyfriend having opposite reactions to the situation, as Billy resolves to hunt Prometheus down even more aggressively, while Paul begins to become very unsure of his marriage to Curtis, now that he knows his husband is Mister Terrific. 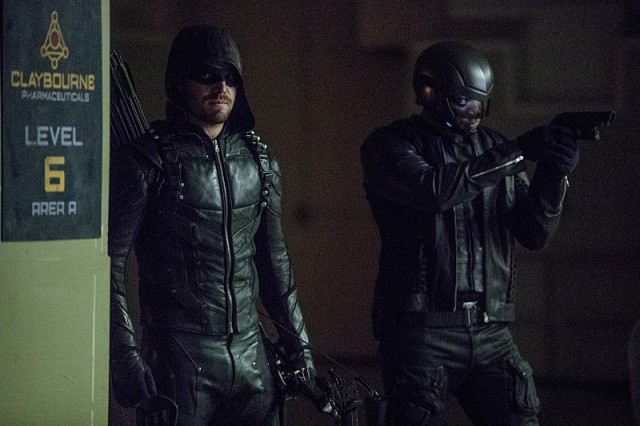 All the while, Prometheus continues to play Team Arrow like a fiddle, laying down more twisted games for Oliver that once again exceptionally call back to Season One, when Oliver was a much more brutal and uncompromising killer. Some more pieces of Prometheus’ puzzle were laid into place this week, as a former target of Oliver’s Season One list named Justin Clayborne is initially believed to be Prometheus, before a DNA scan reveals Clayborne’s cremated ashes in the Clayborne plant’s inventory. After some digging from Billy, a new theory suggests that Prometheus is actually Clayborne’s illegitimate son, who has even more than revenge on his mind when it comes to striking back at Oliver for killing Clayborne four years ago. This was nicely balanced storytelling, as it sheds a bit more light on who Prometheus may be, without completely laying his agenda bare just yet.

We did get some solid action during the few scenes where Team Arrow encountered Prometheus, though it was the heart-wrenching drama that was the real star of this midseason finale. The Bratva flashbacks were even temporarily dropped in this episode, surprisingly, for a creative shift that instead called back to a story from Oliver’s first year under the hood, almost immediately after Diggle discovered his vigilante identity in the series’ third episode. This directly and visually contrasted Oliver’s past actions with his present behaviour, with Prometheus even staging former crime scenes that Oliver left behind to lure him to face his supposed judgment. Even as Oliver deduces Prometheus’ riddles, Prometheus is nonetheless ready for him, and the villain being in such complete control is something that Arrow hasn’t created the impression of this effectively since Season Two’s standout Deathstroke agenda.

The rest of the team isn’t safe from drama either, as Curtis’ husband eventually leaves him when he sees that there’s no dissuading Curtis from his vigilante career, and Artemis’ betrayal is quickly made known to the team in the Clayborne plant, mere moments after a sweet gift exchange no less. Artemis’ betrayal did feel a little overshadowed compared to all of the other story elements at play in this episode, especially when she disappears for the rest of the episode immediately after the truth comes out, but Team Arrow being short-handed is truly the least of their problems, even when Oliver tries not to involve them. The real gut punch was yet to come too, as Billy is eventually captured by Prometheus, motivating Oliver to authorize lethal force on the part of the police and the ACU, which only makes Prometheus goad Oliver harder about being a killer.

Thea and Susan end up being great voices of reason all the while, reminding Oliver to not simply dwell on the negative element of his legacy as the Green Arrow (even if Susan is supposedly unaware that Oliver is the Green Arrow at this point), though this only led to more tragedy after Oliver tries to find Billy himself. After Prometheus is seemingly cornered, Oliver decides to fire three arrows into him, seemingly killing him! Upon closer inspection though, Prometheus’ voice is revealed to be coming from a speaker, and the man that Oliver killed was actually Billy, none other than Felicity’s kidnapped boyfriend. This was an excellent twist, and to Oliver’s credit, he didn’t hide it or sugarcoat it, immediately slinking back into the hideout to tell Felicity and everyone else what he had done, even if by accident. To Felicity’s credit as well, she doesn’t blame Oliver either, even when fighting tears and an emotional breakdown that eventually has her falling apart at the news report that’s published at the end of the episode, telling all of Star City that Billy Malone is dead. Even when Oliver tries to make his team abandon him, they stand firm, again providing a nice bit of optimism to help prevent the misery from becoming too overpowering. 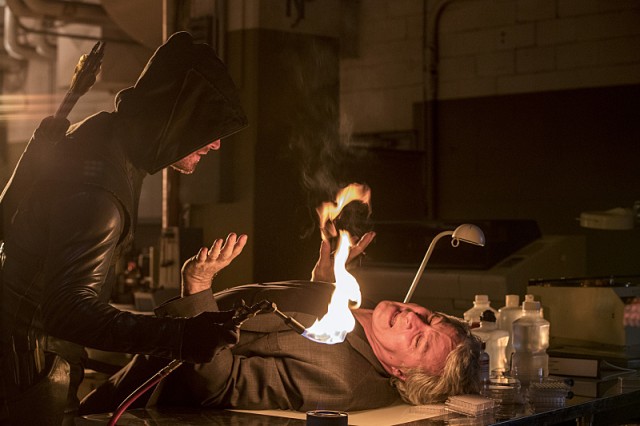 Things still don’t look good for Team Arrow going into 2017 though, as Prometheus’ plans continue, with a false call from Lyla luring Diggle into a capture by the police at his safe house in the episode’s final moments. The biggest bomb was dropped right in the final few seconds though, as Oliver returns to the hideout, and is greeted by… Laurel?! But how?! Laurel’s death last season didn’t seem to be erased by Flashpoint, so how exactly is she standing before Oliver here? Mind you, this might explain Katie Cassidy signing the same multi-series CW contract that John Barrowman and Wentworth Miller also signed before this season, effectively making them all multi-series regulars across Arrow, The Flash and Legends of Tomorrow alike. The question remains though; Is this actually Laurel, somehow back from the dead? Is it another trick? Has Oliver simply started to lose it? I guess we’ll have to wait until 2017 to find out.

“What We Leave Behind” was another excellent callback to this show’s legacy, and one that functioned all the better when coming off of last week’s 100th episode that so effectively did the same thing. Arrow fully resolving the past so it can look to the future is becoming a surprisingly smart play for the series, even if it’s one that didn’t get off the ground right away. Artemis is still the season’s weak link at this point, since her betrayal hasn’t yet had any kind of worthwhile impact on the team beyond an acknowledgement as of yet, though their turned ally is sure to menace them again in 2017, hopefully in a superior fashion. Most notably though, Prometheus is becoming a better seasonal villain with each passing episode at this rate, and even with a bit more of the mystery behind him peeled back, he definitely left his mark for the end of Arrow’s 2016 run. Hopefully, his grand plan gets even more thrilling in Season Five’s back half next year!

Arrow 5.9: "What We Leave Behind" Review
Arrow continued to ride high with a superb midseason finale this week, as Prometheus demolishes the team's spirits with a series of dramatic blows.
THE GOOD STUFF
THE NOT-SO-GOOD STUFF
2016-12-08
93%Overall Score
Reader Rating: (0 Votes)
0%