Looking back, some of my best video game-related memories have something to do with the extreme sports genre that peaked back in the late 90s and early 2000s. Many, many hours were spent playing Tony Hawk’s Pro Skater and 1080 Snowboarding on my tried and true N64, then Tony Hawk’s Pro Skater 3, MX 2002, SSX and SSX Tricky on my well used PS2. Other titles filled in as rentals and brief addictions, but those were the games that really hooked me and still, to this day, remain personal favourites.

Although certain developers have tried their best to bring the once fantastic extreme sports genre back to greatness, with releases like last-gen’s surprisingly excellent SSX reboot and this generation’s utterly forgettable Tony Hawk’s Pro Skater 5, the intended resurgence has never kicked into gear. It’s a shame, because those of us who’ve been pining for it have been left wanting, with only a limited amount of titles to choose from.

It seems that Ubisoft was listening to us, though, because they’re the latest combatant to enter the arena, with a brand new extreme sports IP they’ve dubbed Steep. An open mountain and open air experience, it ties four sports (skiing, snowboarding, wingsuit gliding and parachuting) together in an effort to revitalize the aging genre. The result is a solid and very ambitious game that does more right than it does wrong, yet isn’t as polished, sexy or memorable as its developers hoped it would be. One that fills an itch and acts as a great building block for the future, but won’t set the world on fire in its current state.

Being that Steep‘s goal is to provide players with a large and fully open mountain range in which to shred, soar or trick, one should cut it some slack when it comes to its visual presentation. After all, that’s an ambitious aim, and we all know how imperfect open world games tend to be. Each one has its own fair share of glitches, and expecting their graphics to be on the same level as a more linear, campaign-based experience is just silly. 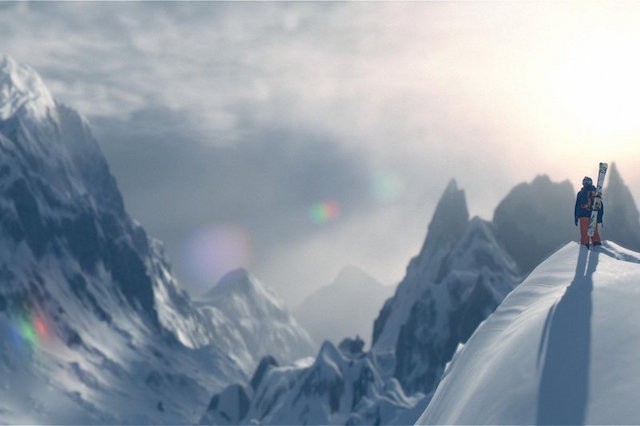 For the most part, Ubisoft Annecy’s new IP looks and performs pretty well on the Xbox One console. However, it’s definitely not perfect, nor is it close to being flawless. With the open world design comes visuals that don’t stand out as much as they could, including some dated-looking textures. It’s also not uncommon for backwards facing camera angles to show the player’s skiis or board digging into the world’s geometry. Those are things that one can learn to live with, though, so long as the title performs well and is fun to play, which are both true for the most part. In fact, the only really debilitating visual problem pertains to times where the game simply cannot keep up with its own simulated sense of speed, resulting in both visual pop-in and momentary bouts of framerate slowdown.

Generally speaking, though, Steep is a very clean and sterile-looking game. One that does its job but won’t blow you away, or have you itching to show it off as the next “Look how far video games have come!” example. We shouldn’t expect it to be that, though, given that it’s not only a new effort, but one which focuses on providing a large, open world to explore. Plus, given how quick it is to load or refresh the player’s avatar whenever a retry is in order, it’s hard to complain too, too much.

As you may have surmised, Steep is more about serenity than it is about pulse pounding beats or any caricatured storyline. That means that, for the most part, it’s just you and the mountains, with most of the sound effects coming as a result of your shredding, or the falls that result from either tricking too hard or sliding over rocks for an extended period of time. If you’re looking for something upbeat and frenetic, this isn’t it, because music is used sparingly and is mostly focused around competitions. When it is used, though, the music is fitting and features a nice variety of types and tunes.

Steep is, however, also a social experience. Inviting friends to play with you is something that is heavily encouraged, both in the game and within its marketing, and you’ll get the most out of it if you do just that. As such, pressing the A button will allow your customized avatar to utter random phrases towards both friends and passers-by. It’s nothing special, nor is it a revolutionary or even modern approach to social gaming, but it’s there to be used if you’d like.

Outside of the above, the majority of the audio comes from times when an ally pipes up and tells you about a new challenge you’ve unlocked, or introduces an event you’ve entered. He’s rather exuberant and a bit of a dude’s dude, so expect the usual slang and dudebro mannerisms that go with that type of personality. It works, though, given that this is a game that is centred around extreme sports, and one that is otherwise rather sterile.

Those who take a trip to Steep‘s large and expansive mountaintops must do so expecting something serene and relaxing, where finding new lines and sharing such discoveries is emphasized over any sort of true narrative. This means that those who are expecting the colourful exuberance of SSX, or the linearity of other such games, should look elsewhere.

That said, while the developers’ goal was to promote relaxation and to present a zen-like gameplay experience, Steep can create an overwhelming sense of anxiety and, at times, confusion. Why is that? Well, to be blunt, this isn’t the most intuitive or perfectly designed game. 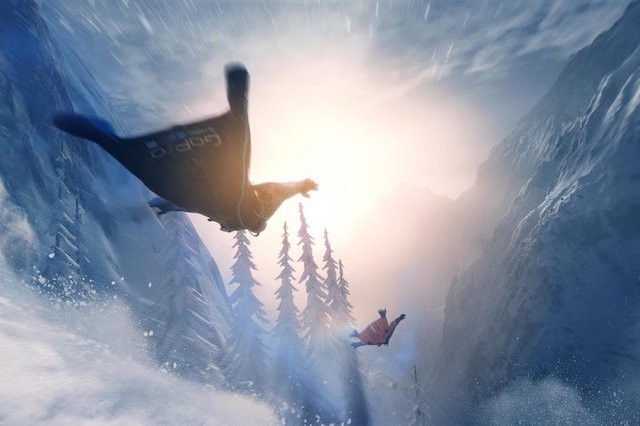 Sure, Steep offers tutorials and easy challenges to start off with, but after that you’re mostly left to your own devices as to where you go or what you do. There are drop-in locations, random challenges and things like that which can be warped to and entered into, but the world is so big and the direction is so limited that looking at the map can be overwhelming. It would help if it wasn’t so finicky, or if locked areas weren’t shown alongside currently accessible ones, but the overall design and workings of the map app leave a lot to be desired.

One thing is for certain, though, and that’s the fact that there’s a lot to see and do in this game, so long as you have enough interest and patience to stick with it. Don’t buy Steep if you’re looking for something to beat, because this isn’t a game that you’re supposed to be done with after several hours. Instead, it’s something that requires time and dedication, because the whole idea is that, as you progress, you’ll level up and unlock new areas to explore.

In fact, a lot of the challenges and drop-in locations happen to be locked behind level walls, and many of the game’s character customization options (some of which are silly things like an axe-in-the-head helmet and a clown mask) cost quite a few credits to unlock. What’s nice, though, is that you don’t just earn points and credits for earning bronze, silver or gold medals in challenges, or for completing the more prestigious mountain story events. No, Steep is built around a system that rewards everything you do, from simple shredding, to both tricking and exploration, the latter of which tasks you with using binoculars to discover new points of interest. Hell, you can even earn credit for boarding for a long time without falling, or experiencing thousands of cumulative Gs over time.

Simply put, all of this combines to create an open world paradise for extreme sports fans, where one can glide through the air, land and then plough through the fresh powder on either skis or snowboard. Not a perfect one, though, as occasionally imprecise controls and wonky physics can lead to a bit of frustration. It also must be said that, despite being marketed as an amalgamation of different sports and gameplay styles, Steep is best enjoyed while using skiis or snowboard, though the tricking system could use some fine tuning. Sure, the high adrenaline squirrel suit stuff is fun for the most part, but it doesn’t feel as polished or as solid as the more traditional sports. Nor does the parachuting, which honestly leaves a lot to be desired, especially since its challenges are so finicky that they’re almost a chore to play.

Little can really be said about Steep‘s storyline, because it’s far from being prominent. Yes, there’s an underlying narrative to be gleamed from everything, but it’s all based on progression and invested time. As you play, you’ll earn experience points and level up, which will then allow you to unlock new drop zones and events. Some of these challenges will be sponsored by companies like Axe and GoPro, and it’s in those where you’ll be proving yourself to the masses, thus making a name for yourself.

As mentioned above, though, this isn’t something you should buy if you’re looking for a familiar campaign structure, because that’s not what you’ll find here. This is something that you’re expected to take your time with, explore the in and outs of, and get better at over time. That, or something accessible to play with friends.

Steep is an interesting game, because it’s both ambitious and somewhat unique. Fans of extreme winter sports should look to it if they’re itching for more digital powder to shred upon, although those who do should go in knowing that this isn’t an incredibly linear or perfectly polished experience. It is fun and relaxing, though, and offers many hours of gameplay for both solo players and groups of friends.

That said, I’d be remiss if I recommended this title without mentioning its season pass, which is beyond terrible. I say that because three new sports (Rocket Wings, Base Jumping and Speed Gliding) will only be made available to those who pony up some extra dough, whereas they should be made available to all.

Steep Review
With Steep, Ubisoft has delivered an ambitious example of an extreme sports game. One that will serve as a good building block for the future, but is currently held back by its far reach and resulting technical problems.
VISUALS70%
AUDIO70%
GAMEPLAY65%
STORYLINE50%
The Good Stuff
The Not-So-Good Stuff
2016-12-08
65%Overall Score
Reader Rating: (1 Vote)
85%