This movie also seems to continue the recent recurring Hollywood idea of designing out-of-control party-themed movies around grown, outwardly mundane working adults, rather than high school students or college students. Hell, the Christmas season of last year even brought us the similarly-styled adults-partying-hearty comedy, Sisters, even if that movie didn’t boast a Christmas backdrop to go with its Christmas release. Office Christmas Party is another movie that seemingly encourages everyday responsible adults to embrace their wild side for the holidays, and it’s at least reasonably enjoyable ridiculous fun to that effect, even if it’s very doubtful that this movie will be revisited in Christmas seasons to come.

Office Christmas Party is a pretty large-scale ensemble piece, and brings together a big collection of actors who have been tasked with elevating a fairly bland script. As you can imagine, it’s the characters and their unexpected shenanigans that really manage to sell this movie, even though some are definitely better than others. Jason Bateman, Olivia Munn and T.J. Miller all play the movie’s central presences, though Miller really steals this movie and runs with it, considerably more so than Bateman and Munn, whose initially distinct personalities are quickly lost in an uninspired romantic arc that hits all of the exact notes that you would expect.

What makes T.J. Miller’s character, struggling office boss, Clay Vanstone, work so well, is that Miller is a cool boss that doesn’t truly come off as an idiot, and is actually pretty well-liked by his work force. Whenever the movie needs a good shot in the arm, Miller is usually there to provide exactly what it needs to stay funny in the moment. The same is true of Clay’s bitchy, heartless sister, Carol Vanstone, played by Jennifer Aniston, who is the company CEO, and is desperate to shut down Clay’s failing branch, despite it being the Vanstone family branch. Against the odds, Aniston manages to make her unlikable character appealing to watch, even as she literally exists for the sole reason of making everyone around her miserable.

The supporting cast works to more mixed effect, though there are some standouts. A surprising standout in the cast actually is Courtney B. Vance, playing a client that Clay is trying to woo for a contract to save his branch with, since Vance is normally a very serious actor in very dramatic shows and movies, but he really commits to this comedic part with aplomb. Vance often tears it up more than anyone else, and his stoic disposition contrasts very well with the movie’s zany direction, creating some very potent humour.

Another big standout is Kate McKinnon as hyper-responsible HR head, Mary Winetoss, who predictably and comically fails to keep the office under control at every turn. McKinnon is rapidly rising as a comedic talent in movies lately, and this is probably her best feature film turn yet, even considering her high-profile stint in Ghostbusters this past Summer. The same could be said of Vanessa Bayer, a lesser-known TV actress who plays an under-appreciated, put-upon divorcee at the office, who also has the makings of an up-and-coming comedy talent in movies, being another of this movie’s most funny and appealing characters. Rob Cordry also has one of his funnier appearances in a while here, as the foul-mouthed, irreverent head of sales. Cordry is a funny guy, but his movie resume is very uneven, and he doesn’t always seem to choose good scripts. Fortunately, Office Christmas Party is one of the better showcases of his comedic talents on film, even though this movie also doesn’t have that great of a script itself at times. 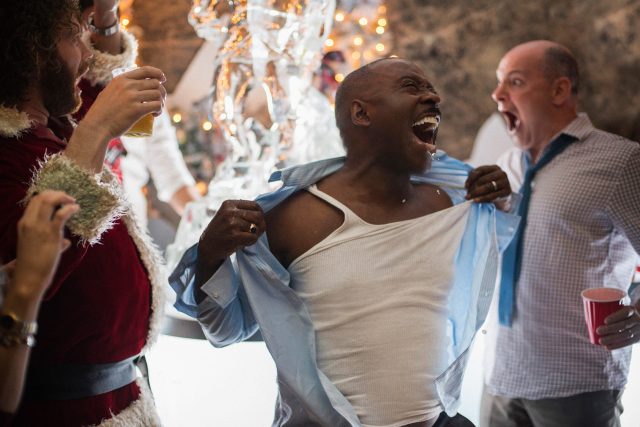 Despite these highlight performances though, there are also some dud characters dragging things down a bit. In spite her best efforts, Jillian Bell doesn’t fully manage to sell her character, an antagonistic female pimp who is monitoring a hooker that she lends to one of the office employees. Likewise, Randall Park isn’t given enough to work with as a quiet, unassuming accountant that Bayer’s character is attracted to, and it’s not long before he’s pushed into the background and largely forgotten. Jamie Chung, Matt Walsh and a few other recognizable faces are also frustratingly under-used, possibly having scenes cut for want of pacing, due to the very large cast all fighting for attention in Office Christmas Party.

When the movie is allowed to really let the actors let loose in general though, it works, and it definitely seems like everyone involved is having a great time, for better or for worse. Not every character moment succeeds, and the attempts at drama almost always fall flat, but this rambunctious bunch of desperate office employees is certainly charming enough to party with for just under two hours.

Office Christmas Party doesn’t often concern itself with its storyline. Like I said, the best parts of the movie are often the parts where the actors are all allowed to just go crazy with each other, with the loose backdrop of a Christmas party at work gone out of control. There are valiant attempts made to flesh out pivotal characters and make them more than party fodder, with Miller’s, Aniston’s, Bateman’s and Munn’s characters often getting the most development, though many of the character arcs also end up quickly lost in a mad bender of drugs, alcohol, noise and dancing.

As I also mentioned, Office Christmas Party doesn’t really throw many curveballs with its storytelling either. This is a very simple-minded comedy that you can predict the story turns of long in advance, with everything mostly existing as a loose backdrop to connect several amusing comedic bits at the titular party itself. The third act especially seems to firmly throw up its hands, going into the realm of the legitimately fantastical in a last desperate bid to resolve the many office conflicts that fester and grow at the party. You’re really not getting much out of this storyline, but in a movie like this, I suppose that one really doesn’t need to concern themselves with the plot when enjoying the fun.

Office Christmas Party is directed by Josh Gordon and Will Speck, the two minds that gave us 2007’s middling Blades of Glory and 2010’s rather lacklustre The Switch, another collaboration between Jennifer Aniston and Jason Bateman. For what it’s worth, Office Christmas Party is probably Gordon’s and Speck’s best directing effort to date, even if it’s also not a huge leap over Blades of Glory. It feels like the actors are carrying most of the movie, with Gordon and Speck simply sitting back and letting the actors’ personalities compensate for the rather flimsy script.

Office Christmas Party’s actual party is at least impressively realized, and Gordon and Speck manage to capture the scenes that matter amidst so much craziness going on around them. Some of the camera work is pretty awkward at times, and a few comedic setups really don’t land, but Gordon and Speck also manage to get fairly good mileage out of a very large ensemble cast, even if some faces are inevitably lost in the shuffle. Once again, the movie is often at its best and funniest when it fully embraces its simple-minded lunacy, since Gordon and Speck both seem rather out of their element when dealing with more grounded drama, as was constantly evident in The Switch several years ago. Fortunately, there’s a lot more partying than drama in Office Christmas Party, so at least the two directors mostly got the simple recipe of this movie right.

There’s really not much to analyze about Office Christmas Party. It knows what it is, and it delivers reliable Christmas shenanigans for adult audiences, without much of a lasting impression. In the moment, the movie is pretty funny, if you suspend your disbelief and simply let the craziness wash over you, though as I said, I doubt that Office Christmas Party is going to be joining your frequently-revisited library of Christmas movie classics in years to come. Even compared to certain other Christmas comedies for adults, like last year’s very enjoyable The Night Before, Office Christmas Party doesn’t have enough meat to stand out beyond its in-the-moment silliness. 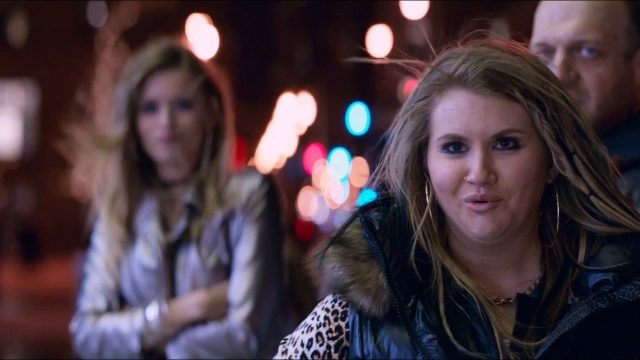 This is definitely the kind of movie that is best worth renting and enjoying with a group of your giddy pals over egg nog and gingerbread cookies after it hits home video, though if you simply want an undemanding Christmas comedy to enjoy in the theatre during this year’s Christmas season, this movie is a fairly reliable option. Office Christmas Party is definitely better than the underwhelming and thoroughly pointless Bad Santa 2 from last month, though we’ll see how it compares to 20th Century Fox’s own R-rated Holiday-themed comedy offering for 2016, Why Him? when it hits theatres soon. For now though, if you want to party with Santa, this is one big screen Christmas party that you’ll have a reasonable amount of fun with, despite the fact that even the designated drivers probably won’t remember most of it by the following morning.