NOTE: Full spoilers from this episode of, “Doctor Who” are present in this review

2016 was almost entirely devoid of Doctor Who, as Series Ten of New Who prepares to begin airing this April, but the year was at least rounded off with the series’ traditional Christmas special, giving fans a way to tide themselves over as they await The Doctor’s next proper batch of adventures. As I’ve mentioned in the past, the Doctor Who Christmas specials can be very hit-or-miss at the best of times, but 2015’s Christmas special, “The Husbands of River Song”, proved to be particularly stellar. This leaves plenty of hope for 2016’s own Christmas special, “The Return of Doctor Mysterio”, even if it has to work with the fact that there were no other new Doctor Who episodes in all of 2016. 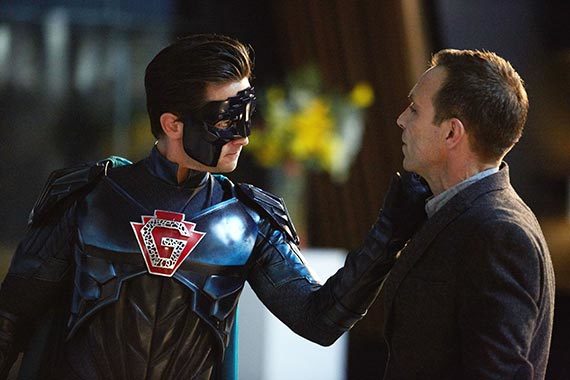 Yes, those brain-swapping aliens from King Hydroflax’s ranks are back again, and this time, they have all of present-day New York City in their sights. In a bizarre twist of fate however, one that The Doctor had his own inadvertent hand in, New York is now being patrolled by a superhero, The Ghost, played by Justin Chatwin. This is all explained during a funny and charming intro sequence, where The Doctor botches a device that is supposed to help fix leftover paradoxes from his last visit to New York (a smart callback to pivotal Eleventh Doctor episode, “The Angels Take Manhattan”), and ends up dangling in front of a young boy’s window. The boy happens to be a huge fan of superheroes, and is also nursing a cold, so The Doctor decides to help him feel useful by enlisting his help in setting things right for the city. When the boy mistakes one of The Doctor’s tools for medicine and swallows it however, he begins developing superpowers, since that’s his heart’s greatest desire. The Doctor urges the boy never to use the powers, but obviously, that’s not going to happen, or we wouldn’t have a Christmas special.

So, The Doctor already knows The Ghost, right down to being fully aware of his secret identity, and that immediately sets the stage for a fun and amusing romp through present-day New York. The Doctor restoring Nardole from Hydroflax’s body and making him a new companion also immediately pays dividends, as the rapport between these two is a huge part of what makes this Christmas special so enjoyable, and lays out all sorts of promise for Series Ten later this year. Nardole isn’t just treated as comic relief either, as there are a couple of heartfelt scenes where he must recount for bystanders why The Doctor appears to be grief-stricken… Supposedly. Honestly, The Doctor is in a far better mood than usual here, so it’s a bit odd that people pick up on that. Still, while It’s been a whole year for fans, the events of, “The Husbands of River Song” only happened a short while ago for The Doctor, and Nardole being a persistent reminder of that was something that worked fairly well, especially since The Doctor’s own emotions honestly weren’t given a lot of focus in this episode.

Fans of superheroes, and especially of the old-school Christopher Reeve-starring Superman movies, which, “The Return of Doctor Mysterio” seems to take the most inspiration from, will also find a lot of things to enjoy in this episode. The female lead, Lucy, played by Charity Wakefield, is an effective Lois Lane stand-in that adds a lot of heart and humanity to Chatwin’s everyday alter-ego, Grant Gordon, a male nanny for single mother, Lucy’s infant child. Likewise, the little nods to classic Superman convention, while sometimes proudly stolen as the Alien connections were in, “Last Christmas” from 2014, are quite a bit of wholesome fun, especially when the episode manages to put so many witty spins on them, now that they’re being viewed through a modern Doctor Who lens. Obviously, Capaldi’s Twelfth Doctor is great as ever when it comes to bringing the courage and charm in spades, and Capaldi seems to be having even more fun than usual with his performance in this particular offering!

The drawbacks to, “The Return of Doctor Mysterio” don’t really come up much until towards the end. The first two thirds of the episode, which mostly involve the establishment of The Ghost, and The Doctor’s subsequent discovery of both the superhero and the brain aliens’ plan to replace world leaders, are all tightly-executed and highly enjoyable. The climax and conclusion however feel a bit too neat and tidy. The Doctor having to trust Grant to lift and toss away a spaceship falling to the city feels too transparently predictable, and Grant abandoning his identity as The Ghost immediately afterward feels a bit unrealistic and overly convenient for the show’s canon. Does Grant seriously think that Earth will never see a hostile alien invasion again? Even in the case of The Doctor, his grief over River, which Nardole brings up to Lucy and Grant as they leave, is ultimately kind of treated like an afterthought, despite Nardole’s great connection to that idea. Maybe this will be fleshed out a bit more in Series Ten, but for now, it felt like the special’s hands were tied, in the sense that it couldn’t have The Doctor be brooding and grouchy in an episode that was clearly upping the fun factor most of all. 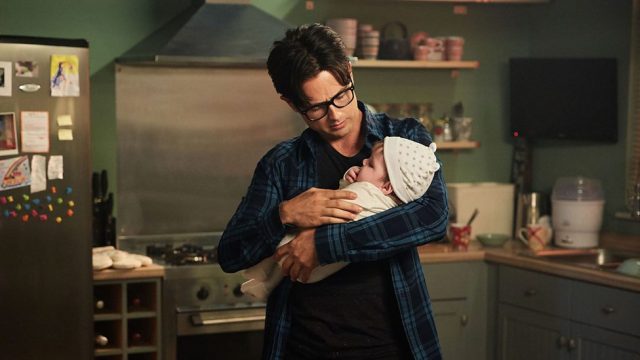 It’s a pretty obvious tide-over offering, but, “The Return of Doctor Mysterio” is great fun for Doctor Who fans and superhero fans alike. The episode doesn’t have nearly as much depth as, “The Husbands of River Song” did back in 2015, sometimes to its detriment, but it’s still a very entertaining offering that completes the transition of Nardole as The Doctor’s new non-human companion, before newcomer, Bill rounds out the human end of the ensemble during Series Ten this Spring. It also manages to stand above the majority of Doctor Who Christmas specials, which can still easily be considered a win on its own for The BBC’s long-running sci-fi series. I imagine that The Doctor’s adventures in Series Ten will leave more of a lasting impression, but at least this enjoyable romp makes the wait for said adventures that much easier.

Doctor Who 2016 Christmas Special: "The Return of Doctor Mysterio" Review
Doctor Who's lone 2016 Christmas special is a fun, if simple-minded romp that mixes The Doctor's adventures with a superhero twist.
THE GOOD STUFF
THE NOT-SO-GOOD STUFF
2017-01-03
82%Overall Score
Reader Rating: (0 Votes)
0%