A few years ago, we posted an image to our Facebook page with the caption, “Keep hope alive.” The image was of a very large creature we knew only as Trico, and a young boy standing next to him. The game was, of course, The Last Guardian.

In this case, it seems that all hope was not lost, and we finally have The Last Guardian. What we perhaps neglected to be specific about was whether or not just releasing the game would be enough. We forgot to hope that it would be good.

Because The Last Guardian is tragedy and heartbreak rolled into what is otherwise a work of art.

The Last Guardian is a beautiful game, without question. It looks a bit like Uncharted mixed with The Legend of Zelda‘s upcoming adventure, Breath of the Wild. There’s an almost painterly quality to it, though it is somehow also very realistic.

Your large companion in The Last Guardian is Trico, a giant animal that crosses a bird and dog and cat into one huge creature that resembles a Hippogriff in many ways. Each of Trico’s thousand feathers is meticulously rendered, showing off how much power is available in the PlayStation 4.

The unnamed boy you control in The Last Guardian is one-tenth Trico’s size (if that), covered in mysterious tattoos, and wrapped in a loincloth. The fabric physics in the game are quite well done, though they’re a bit excitable; just moving the boy slightly causes his getup to flail wildly.

Environments are absolutely the star of The Last Guardian. While they don’t vary much–you’ll be seeing the same ruins and outdoor scenes over and over (and over) again–they are beautiful. Stone temples and huge structures tower over the boy and Trico, and their monumental size is absolutely felt by the player. Light falling through an open cave or across a large valley of grass and rubble is stunning and inspiring, and a much-needed break from what are otherwise quite drab and brown interior structures.

Small touches like the way the boy’s hands grab an actual ladder rung, or the fact that his feet rest on an actual step in a series of stairs, add to the realism of the game.

With that said, there are more than a few dips in framerate throughout the experience, often falling into single-digit territory during scenes where Trico is jumping and a structure is collapsing. The world is massive, so there is certainly a lot going on, but it is clear that this game was meant to be best experienced on PlayStation 4 Pro, which is perhaps more of an annoyance to those who’ve been waiting for this game for the better part of a decade than it would be if this were just another game.

The soundtrack for The Last Guardian is appropriately orchestral, filled with themes that can be listened to on their own but feel perfectly in place during the narrative of the game. Very reminiscent of similarly-themed games with rich histories, again, the soundtrack is a mix of Uncharted‘s daring themes and Zelda‘s symphonic melodies.

When the boy speaks to Trico to command or console him, he does so in a mumble of sounds which works in a very endearing way. Having actual English dialogue here would have drawn us away from the experience much more than it would add to it. 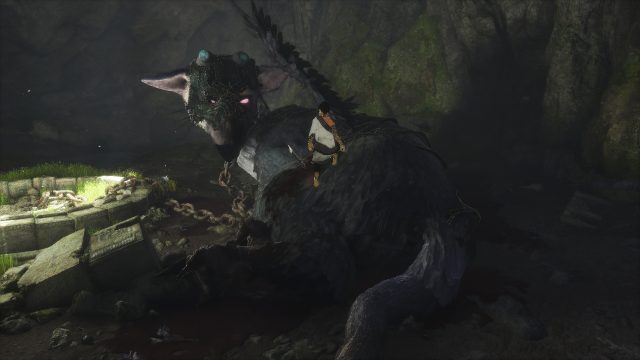 While Trico is inherently gentle-looking and soft-mannered, his size and movement is echoed appropriately. When he moves around, he carries with him a certain weight, both literally and figuratively. The effects of this giant creature pouncing on an enemy or swiping at a barrel of food is appropriately weighty, though nothing compared to the size of him landing a jump from a hundred feet away.

Ambient noise is expertly mixed into the game. Wind flowing through grass and trees is realistic and sometimes hauntingly realistic. Perhaps the best compliment we can pay The Last Guardian is that it is a near-perfect balance of orchestral themes, realistic ambient effects, and stylized dialogue.

Unfortunately, controlling the young protagonist is not nearly as effective as the audio at creating an immersive experience. From a gameplay standpoint, The Last Guardian is a frustrating, cumbersome mess.

Being a huge world of ruins, there are puzzles not unlike the games we’ve already mentioned in this review. They’re much simpler than the huge tombs you’ll find in Tomb Raider, and don’t come close to a dungeon in any Zelda game. That’s not a bad thing, necessarily, but the puzzles are spaced so far apart that they become negligible in use or function. At this level of sparsity, they become more of a hindrance to moving forward than they do a fun challenge every so often in the game.

It also isn’t abundantly clear what the boy has the ability to do. The game does a good job of handholding the player throughout the entire game–dialogs often prompt the player that they are able to move a platform or pull lever–but neglects to mention that the boy can perform certain moves at all. We didn’t know until the end of the game that it was possible to rip the head off an enemy statue or climb on its back to incapacitate it. 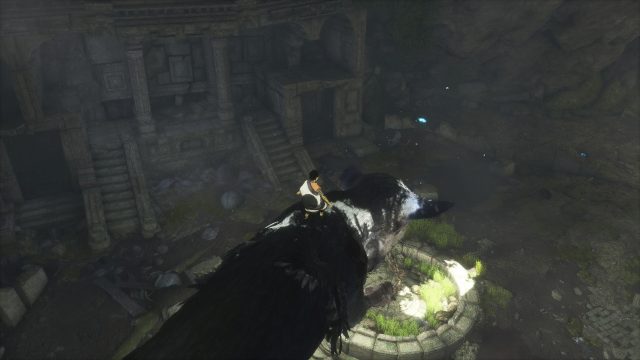 The game also tends to slog on from one area to the next, with very little variety between spaces.

Trico isn’t controlled by the player, which is absolutely fine, but attempting to have him move in any certain way is unpredictable and often broken. The boy can issue commands by mimicking what he’d like Trico to do, such as jump or move to the other side of a ledge. However, Trico won’t respond unless he’s in a resting state; if he’s in any sort of motion, the player must wait for the entire animation to complete before he’ll react. This issue is compounded further when Trico is jumping up a series of obstacles which will often take the beast to a piece of the level that can’t be seen by the player. Triggering Trico to jump into the wrong section more than once can be absolutely maddening and take up minutes of time that are simply wasted.

The game adds new mechanics throughout the ten to twelve hour adventure, and while that’s never a bad thing, the game doesn’t give the player enough information to figure it all out. It isn’t like a puzzle in Zelda that you haven’t seen before, in which a bit of logic will get you through. Instead, you have to somehow just understand that feeding Trico a different way will allow you to progress through the story, or perhaps that a very specific action Trico needs to perform will work on a single small area of a room but nowhere else. Once again, maddening.

There’s not really much that the player is doing in The Last Guardian. It’s actually quite boring. Sure, there are small puzzles here and there, and a bit of combat every once in a while, but the vast majority of what you do as the young boy is climb from one room to the next, pull a lever or flip a switch, allow Trico to follow you in, and repeat. Ad nauseam.

The cinematic cutscenes in The Last Guardian are wonderful. They tell short stories that have a subtle impact on the game overall, and the use of a narrator throughout the game is a fine mechanic for the style of this adventure. There’s lots of promise in what is coming next, and while the journey to discover it is wrought with annoyances and poor camera controls, there’s a palpable sense that you should continue on.

The storyline in The Last Guardian makes little to no sense. It is difficult to explain without giving much away, and we’d like to remain completely spoiler-free here, but suffice it to say that the ending of the game delivers precisely zero answers to the game’s questions of why and how what’s happened in the game has happened. 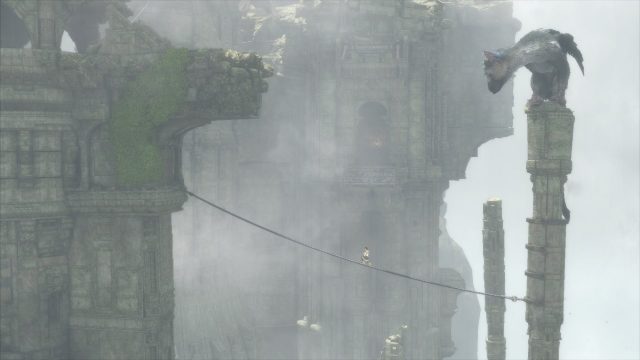 Little moments as the story progresses are quite lovely. Noticing that Trico’s horns have grown throughout the experience is a nice touch, and getting to the end of the game, the final series of cutscenes is great. It shows a wonderful, human story. But it doesn’t quite connect to anything that happened throughout the game.

The moments in the game that are genuinely surprising and beautiful are so marred by the middle eight hours of boring slog, that it completely discounts all the hard work Fumito Ueda and his team have done in crafting what is otherwise a beautiful story.

The Last Guardian is as endearing a game as you’ll ever play, but it is boring as all hell. The epitome of repetitive gameplay thus far has been No Man’s Sky, and this handily beats out any claim that Hello Games had on that (likely unwanted) title.

We’ve waited almost a decade for this game, and it’s a disappointing mess of what are actually great ideas. It’s a real shame to see that this game that has finally come to light has done so in a manner that has us wishing for what could have been should it never have been released.

The Last Guardian Review
A disappointing release after such a long wait, The Last Guardian had the opportunity to be the title that lived up to the near-decade long hype, but instead, it falters to camera issues and poor controls while delivering a story that simply doesn't work with the game.
VISUALS77%
AUDIO74%
GAMEPLAY50%
STORYLINE56%
The Good Stuff
The Not-So-Good Stuff
2016-12-30
62%Overall Score
Reader Rating: (4 Votes)
67%