Agents of S.H.I.E.L.D. generally did very well with its, “Ghost Rider” Volume from the front portion of Season Four in 2016, and now, it’s beginning a new story arc in a second Volume, “LMD.” The show also made an excellent transition to the new, “LMD” Volume, with midseason premiere, “Broken Promises” hitting the ground running with a strong new threat for the team, while also building a very promising new hook in the ongoing Inhuman drama that has continued to be such a big part of this series.

In the wake of Aida killing a S.H.I.E.L.D. agent and replacing May with an LMD at the conclusion of the midseason finale last month, Aida quickly turns her focus to the Darkhold, which seems to have defied her programming to give her actual sentient thought. After Fitz and Radcliffe are ordered to wipe Aida’s memory, she escapes and becomes a fugitive, preparing to break into the S.H.I.E.L.D. base to steal the Darkhold for herself.

While this is going on, the revelation that Senator Nadeer has an Inhuman prisoner at her home forces Mace to enlist Daisy and Simmons to help liberate the man. In case it wasn’t apparent already, this is also when it becomes clear as day to all of S.H.I.E.L.D. that Nadeer is also a key benefactor of the Watchdogs, and is preparing to execute her Inhuman prisoner, who is also revealed to be her brother, Vijay.

Surprisingly, despite the huge difference between these two plotlines, both were executed remarkably well, complementing each other with the overall idea that the everyday humans are still a bigger threat in much of the Marvel Cinematic Universe than the new world forces that regular people are often so fearful and angry towards. Even the Aida storyline had a surprising twist towards the end, though I’ll get to that later. What I can get into now however is well the show is already capitalizing on the fake LMD May and how she’s fitting in with the team. There’s already a flirtation with the idea that the LMD may motivate Coulson to pursue a romance with May that he never had the courage to go for beforehand. This has a lot of promise for later in the season, since the truth is bound to come out, and that will leave Coulson thrown for a loop at romancing an LMD, as well as throwing May for a loop in that she’s become romantically involved with Coulson second-hand, and then has to pick up the pieces with that.

Aida’s actual invasion of the S.H.I.E.L.D. base proved to be incredibly exciting as well, as she overtakes the system, and starts zeroing in on the Darkhold, even using the LMD May as an inadvertent tool, and cleverly implying that the LMD May has no idea that she’s a mole for Aida. The tense effort by Fitz to make use of a sub-network that he built with Simmons in response to the base getting hacked at least once a year (which was humourously referenced by both Fitz and Coulson), was very entertaining, as was Yo-Yo teaming up with Mack to repel some rogue technology, as the two cutely reference a bunch of movies that are all about machine uprisings all the while. The tense Yo-Yo/Mack relationship coming into focus was pretty satisfying, even though it’s easy to wish that the two would just make it work already. 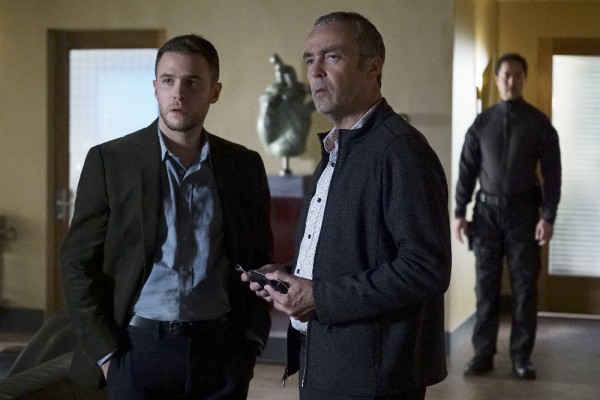 Meanwhile, the Nadeer subplot also fired on all cylinders, giving us a great badass moment with Simmons as she takes out Nadeer’s proxy at the office, before she goes with Daisy and Mace to Nadeer’s residence, shortly after the Watchdogs narrowly murder Vijay, with Nadeer barely calling them off. The Watchdogs’ connection to Nadeer being laid bare in this episode, with implications that a force even higher than Nadeer is also influencing them, made for another dose of great excitement, especially when Simmons ultimately fails to talk Vijay into going with S.H.I.E.L.D. This has Nadeer making the shocking choice to shoot her own brother dead in her escape helicopter and drop his body into the sea, though an epilogue sequence in the final seconds of the episode shows Vijay returning to an Inhuman husk underwater, seemingly indicating that he survived, and is once again dormant. Considering his otherwise mundane reflex-enhancing Inhuman powers, could Vijay have the ability to ‘re-husk’ when in mortal danger? If so, that would be a very interesting new evolution for distressed Inhumans in the MCU.

As for how the Aida storyline ends, she gets ahold of the Darkhold, though after Fitz locks her out of the base’s network, Mack decapitates her, and the threat is seemingly resolved… Or is it? Turns out, the Aida that invaded the S.H.I.E.L.D. base was merely the original model, and Radcliffe has already built a new and improved Aida that’s working as his assistant, while also tending to the captured May. Yes, in a turn that’s sort of surprising, but not really, considering Radcliffe’s origins in Season Three, Radcliffe seems to be behind all of Aida’s recent actions, and is the true mastermind that is seeking the Darkhold. Even considering that a fake May has infiltrated their ranks, it seems like Radcliffe may be the actual metaphorical snake in the grass for S.H.I.E.L.D., once again threatening to de-stabilize the team, right as the Watchdogs have yet again proven themselves to be stronger than ever.

There’s really nothing to complain about with this midseason premiere of Agents of S.H.I.E.L.D., which transitions the show to its new major story arcs pretty much flawlessly. The Darkhold is still in play, but the way that it’s cleverly being integrated into the new LMD plot is pretty inspired, especially when Nadeer and the Watchdogs are still providing a valuable link to the show’s growing Inhuman epidemic. The inability to know who is real and who is loyal with the rise of LMD’s is something that fits very well into the lore of this show, and should keep the intrigue going strong, even with S.H.I.E.L.D. and Daisy both re-legitimized in the public eye now.

Also, on a slightly unrelated tangent, I really enjoyed the sly reference to S.H.I.E.L.D. already having a connection to the recently-established Doctor Strange in the MCU, when Coulson alludes to a secret S.H.I.E.L.D. agent that can cast spells and send things into other dimensions. The agent probably isn’t Strange (how cool would that be though?), but S.H.I.E.L.D. having a secret sorcerer in their ranks is certainly a fun prospect with plenty of potential for future storylines. Besides, if HYDRA admitted to keeping tabs on Strange during the events of Captain America: The Winter Soldier, there’s no way that S.H.I.E.L.D. isn’t doing it themselves.

Agents of S.H.I.E.L.D. 4.9: "Broken Promises" Review
Agents of S.H.I.E.L.D. kicked off its 2017 run with an excellent midseason premiere this week, which seamlessly transitioned the show to its new 'LMD' arc with plenty of excitement.
THE GOOD STUFF
2017-01-11
95%Overall Score
Reader Rating: (0 Votes)
0%