The Big Bang Theory rebounded a bit this week with a slightly fresher and funnier episode than Season Ten can usually be relied on to deliver. “The Romance Recalibration” brought up a very inspired conflict between Leonard and Penny, while also giving us an amusing, if slightly disposable Wolowitz subplot that continued to at least get some solid laughs out of the birth of baby Halley.

Things start off with an amusing dream sequence, whereupon Penny comes to realize that Leonard has completely stopped trying when it comes to taking care of their marriage. Penny brings this up to the women, and is annoyed to see that Bernadette and Amy are doing better than ever with their own men too. In fact, things with Sheldon and Amy are actually better than ever, complete with Sheldon being uncharacteristically affectionate and outgoing with Amy in this episode!

This is yet another episode of The Big Bang Theory that thrusts the bulk of the laughs on the shoulders of Jim Parsons, though that’s not so bad when the core conflict is so clever. Seeing Sheldon show his more darling and affectionate side right as Leonard and Penny are particularly strained made for lots of great laughs, especially when Sheldon was in the rare position of having to be the one giving Leonard relationship advice this time, rather than the other way around. One of the biggest laughs in the episode is when Leonard finally decides to make a big gesture for Penny, then Sheldon completely shows him up with Amy by pointing out how he, “Makes effort look effortless.”

Truth be told though, the idea of being in a rut and not trying as hard to please your spouse, since they’re certainly not going anywhere, is a very real issue that many couples in the real world encounter. Some canned sitcom humour still snuck into the writing every now and then, but the way that The Big Bang Theory used this device to lead to an unusual glorification of Sheldon’s and Amy’s eccentric relationship made for an episode with both humour and heart. This all culminates in a great final twist as well, as Leonard and Penny decide that they have no choice but to ask Sheldon to draft them their very own relationship agreement! 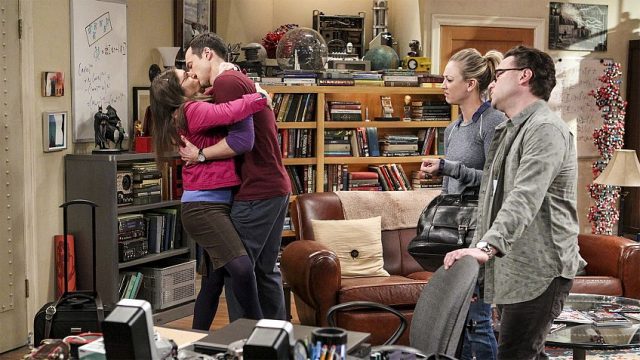 The end reveal of Sheldon being able to write a new relationship agreement tailored specifically for Leonard and Penny brought into focus why Sheldon wasn’t removed from this social group several years ago, at least beyond Jim Parsons being the funniest actor on this show by a sizable margin. The only drawback here was that the actual request and formation of the new relationship agreement was awkwardly squished into the final few minutes of the episode, with virtually all of the proper negotiating and drafting being done off-screen. This was a baffling writing choice that did hurt the episode a bit, sadly. If we’re lucky though, maybe this new relationship agreement will be revisited later in the season, to keep this good idea paying dividends.

The Wolowitz subplot, like I said, is a bit disposable, and is probably going to be forgotten about as soon as the next episode, but at least it was funny, and allowed us to enjoy a more classic Howard/Raj dynamic. When Howard starts struggling with the squeaky floor in his old bedroom, which keeps waking up his infant daughter, Bernadette tries to ask her father for help (albeit unseen and over the phone), though learns that there’s probably nothing that can be done beyond ripping the floor up and installing a new one. Since this would cost a lot of money, Howard and Raj instead try to find a creative solution that doesn’t involve an entire floor replacement.

This led to a surprisingly funny montage of slapstick scenes, something that The Big Bang Theory largely stays away from, whereupon Raj considers Howard trying to make use of a variety of alternate transportation methods that always involve him getting hurt and destroying something in the room. Surprisingly, this is semi-believable, and this got even funnier when Howard and Raj decide to simply mark each squeaky spot on the floor with glow-in-the-dark tape, in the style of a Dungeons & Dragons grid map. Watching Howard try to demonstrate this twisted obstacle course for Bernadette was undeniably amusing, especially when Bernadette justifiably points out that she can’t be expected to traverse the crude arrangement while holding a baby. The cherry on top was seeing just how strained and winded Howard got from a few simple steps, stretches and jumps too. Is Howard seriously that out-of-shape?!

“The Romance Recalibration” gave The Big Bang Theory its first overall good episode of 2017, offering some fresher and more interesting conflicts and jokes at last. Seeing Sheldon and Amy finally be the most successful couple for once was pretty satisfying, and while I wouldn’t be surprised if the show never brought it up again, Howard’s and Raj’s squeaky floor misadventures were funnier than they had any right to be. I hope this isn’t the last time that Penny and Leonard bring up having a relationship agreement, since cramming that into the last couple of minutes of the episode was a major dis-service to the story, but just the very thought that these two had to swallow their pride and come down to the level of Sheldon and Amy is a brilliantly funny turn that fans won’t soon forget!

The Big Bang Theory 10.13: "The Romance Recalibration" Review
The Big Bang Theory rebounded pretty effectively this week, with a fresh and funny episode that finally allowed Sheldon and Amy to be the best couple of the bunch!
THE GOOD STUFF
THE NOT-SO-GOOD STUFF
2017-01-20
80%Overall Score
Reader Rating: (1 Vote)
80%