The Flash’s front half to Season Three was certainly a lot more uneven than the show’s usual superb standard from the first two seasons, and unfortunately, that hasn’t started improving yet with this week’s midseason premiere. “Borrowing Problems from the Future” feels like a tired, irritating episode that brings a lot of this show’s frustrating recurring issues back to the fore, as well as starting off the whole race to change Iris’ fate at the hands of Savitar on a pretty faulty note.

The episode begins with Barry and Wally training together, and Wally beginning to prove himself to be quite the capable hero. Barry, however, is still tormented by the vision he saw of Iris’ death in the future, and this has him not sleeping well, and significantly more withdrawn than usual. This only gets worse when the criminal Barry saw in the future newscast, Plunder, shows up to begin robbing jewelry stores throughout Central City, leaving Barry unsure of whether he should capture the villain, lest he further the future of Iris being killed by Savitar.

On paper, this is kind of an interesting idea, but the way it was executed in this episode was really clumsy. Wally being the one to round up Plunder when Barry initially hesitates is a decent turn, but Barry then being a huge dick to Wally for no real reason afterward quickly starts to come off as forced, pointless drama. Actually, forced, pointless drama was a huge problem with most of this episode, with only some of the dramatic beats really hitting the right notes in the end. Hell, Barry is such a complete jerk to Wally that even Joe is telling him to ease up! That’s just downright out-of-character, especially when Barry seemed all too happy to train Wally shortly beforehand.

Not helping matters is that Plunder is another especially shallow and forgettable villain-of-the-week for The Flash, and represents the latest D-list baddie pulled from DC Comics’ New Earth canon. Beyond a somewhat thrilling, albeit short-lived chase scene in the climax, the character is a complete waste, and basically serves more as a plot device than a truly fleshed-out personality. His big gimmick of a futuristic gun that fires homing bullets is also never explained to boot. Even for a DC show, it’s a pretty huge oversight to just shrug off the fact that a petty crook somehow got ahold of a super-weapon that even Cisco would have a hard time whipping up!

Fortunately, one of this episode’s better storylines was H.R. doing a soft open of the S.T.A.R. Labs Museum, which, as DC fans can no doubt anticipate, is almost certainly a precursor to the iconic Flash Museum from DC Comics lore. The soft open doesn’t go as planned, with the team being mostly cynical about the idea, but H.R.’s surprising wisdom and optimism in relation to Barry’s plight, after Barry is forced to come clean to Iris and the team about the future he saw, eventually motivates Cisco to get behind the museum effort. H.R. and Cisco sharing the idea that greatness takes time, and Cisco doing his part to get the museum up and running as a result, was pretty satisfying, and made up for an episode where many of the characters kept acting unrealistically snooty and nasty to each other, which, again, is very out-of-character for the leads of this show.

There was also some promise in the idea of Barry struggling with being able to change the future and save Iris, with surprisingly reasonable, scientifically-founded arguments being made for both schools of thought on whether the future can indeed be changed. That’s all well and good, except, when H.R. starts acting like Barry can’t save Iris and that there’s no way he can change the future, it overlooks a pretty obvious hole in the argument; Barry already proved that time in the DC Television Universe is not set after creating Flashpoint!! Hell, sibling series, Legends of Tomorrow proves that all over again with every episode, especially in its current season! Had this character conflict for Barry happened before Flashpoint, it would have had more dramatic impact, but with Barry having already created an alternate timeline, and having already been lectured by Jay about how delicate time is, the idea of arguing that Iris can’t be saved feels ignorant, and even downright stupid. 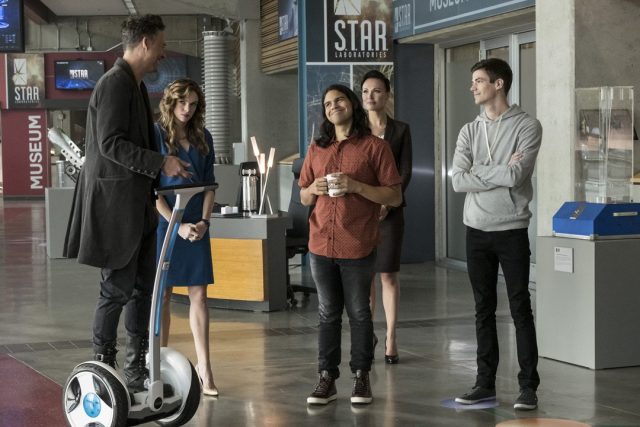 At the very least though, the episode did finally push along the inevitable story turn of picking up the pieces with Julian, namely by having Caitlin urge him to join Team Flash at S.T.A.R. Labs. I don’t know if he’ll be a permanent fixture of the team, and hell, odds are that he won’t be, but still, it makes sense to have Julian join Team Flash, considering that he knows Barry’s secret identity, and is a world-class expert on metahumans. The process of Julian joining everyone, and even being a part of Barry’s housewarming party with Iris at the end of the episode, went over pretty well, and had a nicely heartwarming conclusion. Here’s hoping he becomes another solid part of this show’s strong lead character dynamic in next week’s episode.

The teases for Season Three’s future when Barry and Cisco vibe to the future to look for clues about changing Iris’ fate are also pretty cool, between referencing the Music Meister, the villain of the upcoming musical-themed crossover between The Flash and Supergirl, confirming that Gorilla Grodd will return soon, and foreshadowing that Caitlin will apparently turn into Killer Frost again and go on another rampage, among a couple of other things. It’s just too bad that all of this promising story development for later was squished into a sloppily-written, mostly underwhelming midseason premiere.

“Borrowing Problems from the Future” fumbles most of its drama by failing to account for story turns that this show has already gone through, and the latest disposable villain-of-the-week really didn’t help matters. With the show’s 2017 start failing to gain any added traction, The Flash is officially in a bad way, and needs some serious re-tooling. There’s no reason to panic about it, since the show has already been renewed for Season Four, but even if we don’t have to worry about The Flash being cancelled, it would be nice for it to remember how to reward our viewership properly.

The Flash 3.10: "Borrowing Problems from the Future" Review
The Flash gets off to a frustratingly bumpy start in 2017 with this week's midseason premiere, due to sloppy drama and another wholly uninteresting villain-of-the-week.
THE GOOD STUFF
THE NOT-SO-GOOD STUFF
2017-01-25
67%Overall Score
Reader Rating: (0 Votes)
0%