Legends of Tomorrow has moved to Tuesday nights for its return in 2017, though despite the swap in timeslots, which now leaves Supernatural as The CW’s marquee Thursday night show instead, DC’s time-hopping ensemble series still hasn’t lost a step at all. “Raiders of the Lost Art” was a truly excellent midseason premiere for Legends of Tomorrow this week, one that fittingly addressed every dangling plot thread from the midseason finale, while also giving us some surprisingly clever insight into the backstories of Ray and Nate.

As we saw at the very end of the midseason finale from last month, Rip now thinks he’s an American movie student named Phil Gassman, who is making films about his former life as a Time Master, not being aware that everything he’s putting on celluloid is based on his true adventures from his former life. This comes complete with humourous recreations of scenes like Rip’s confrontation with Vandal Savage last season (there’s even a funny jab at some complaints from fans regarding Savage’s apparent lack of menace during his time on this show), with this episode generally being filled with lots of clever winking humour for geek audiences that love both DC and genre filmmaking. 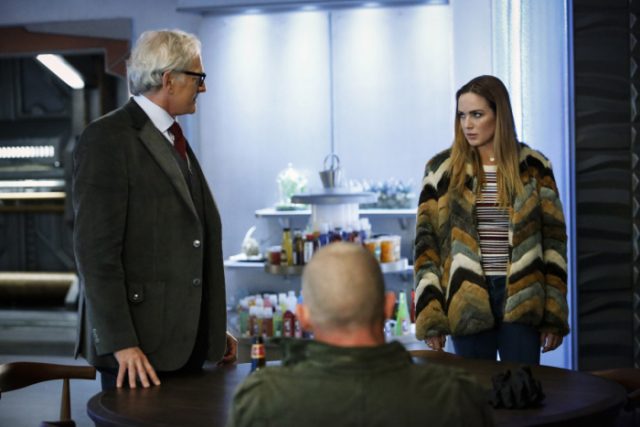 Another big part of that comes from a fictionalized version of George Lucas serving as Rip’s prop master. After the Legion of Doom finds Rip in Los Angeles, 1967 at the same time as the Legends, Lucas is caught in the attack and becomes frightened, which leads to him quitting film school. Beyond this being a pretty big time aberration, it also leads to Ray and Nate losing both their superhero abilities and their intelligence, as it turns out that both were inspired to pursue the fields that they did because of Star Wars and Indiana Jones, respectively. Since Sara won’t be able to work with a useless inventor and historian, the Legends have no choice but to try and convince George Lucas to stay in film school.

This sounds like a pretty ludicrous storyline, even by the standards of this show, and thankfully, Legends of Tomorrow isn’t above poking a bit of fun at itself via such a scenario. Still, there is genuine love behind this episode’s core plot, acknowledging several of the show’s own undeniable inspirations, while also touching on exactly how much an artist managed to change the world through his craft. There’s even a lot of clever nods to scenes from both Star Wars and Indiana Jones in this episode’s action scenes, subtly and brilliantly hinting that Lucas may have been inspired by his time with the Legends when creating both movie franchises. This also has the added benefit of tying in with Rip also making movies about his former life, even though Rip’s movies obviously don’t exist in the real world, by contrast. 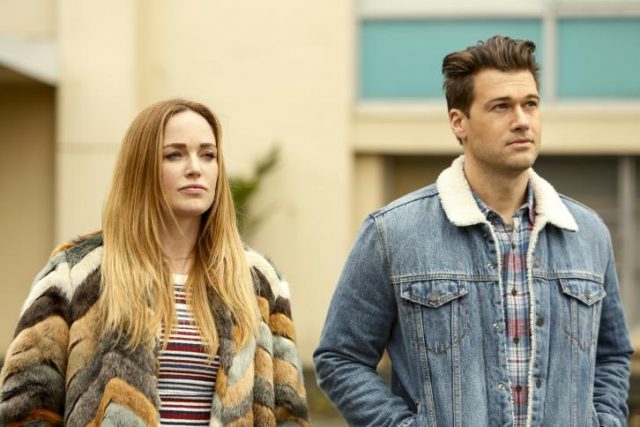 While this is all unfolding, a subplot also takes place with Martin and Mick, conveniently disabling the group’s more power and gadget-based fighters (since Nate has been de-powered, Ray’s suit is erased, and Amaya has her totem stolen by Merlyn), whereupon Martin learns that Mick has been hallucinating images of Snart. After some digging, it turns out that Mick did indeed have a device planted in his head, with Martin working with Gideon to get it out. To his surprise though, the device, implanted by the Time Masters during Mick’s time as Chronos, stopped functioning months ago, meaning that Mick’s visions are simply coming from his own mind.

The confrontation by Mick of second-guessing his new moral code, particularly without Snart around, was something that the episode addressed as a more serious matter, highlighting just how difficult it has been for Mick to stand on his own without his partner-in-crime. The implication of Snart possibly surviving in the Oculus explosion and living on within the time stream is kind of interesting though, and could possibly explain how Snart will seemingly join the Legion of Doom later this season. Most of all though, this continues to beg the question of whether Mick will ultimately be able to fight alongside the Legends for much longer. Could he be admitting that he couldn’t make the same sacrifice as Snart? Will the Legion possibly be able to tempt Mick into their ranks, especially if Snart is among them? 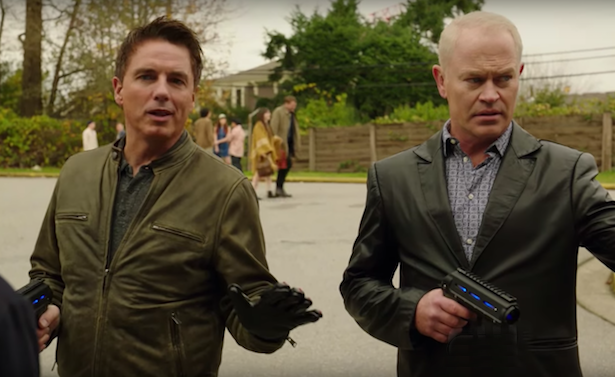 Everything comes together in a pretty enjoyable, action-packed climax in any case, with Sara, Nate, Ray, Jefferson and Amaya taking on Merlyn and Darhk at the city dump, which is where Lucas accidentally tossed Rip’s piece of the Spear of Destiny, the macguffin that the Legion was confirmed to be hunting by the end of the midseason finale. Reverse Flash eventually crashes the battle and subdues everyone, as well as snatching Rip, though the Legends at least manage to get away with the Spear piece and the Longinus Medallion that points them to the other pieces. That’s still a pretty big blow for the Legion to suffer, but Sara understandably takes it pretty hard that she couldn’t save Rip. It certainly doesn’t look good for the amnesiac Rip either, as the Legion prepares to torture him right as the episode ends, not knowing that Rip’s amnesia is genuine, and was the result of Rip directly touching the Waverider’s Time Drive to warp himself away from certain death during the season premiere, even if he had no control over where he went, and his entire memory and psychology would be re-written at the same time.

Legends of Tomorrow following up The Flash on Tuesday nights is something that viewers will likely have to get used to, but fortunately, this superb midseason premiere should make the process a bit easier. “Raiders of the Lost Art” focused on telling a simple, highly enjoyable and surprisingly funny storyline, though one that also had a serious undertone, especially in the Mick/Martin subplot. Rather than feeling gimmicky, the featuring of George Lucas worked surprisingly well when it came to creating high stakes for the Legends, and the message that art is just as important as science in terms of helping people realize their potential was definitely a very satisfying one. Rip’s return was also handled very well, with Rip having one of his most interesting plotlines to date, even when he’s technically not Rip anymore. We’ve had enough time to get used to Sara as the Waverider’s captain, so it’s anyone’s guess if Rip will ever assume command of the ship again, but either way, it’s fantastic to see Legends of Tomorrow being great as ever for the start of its 2017 run!

Legends of Tomorrow 2.9: "Raiders of the Lost Art" Review
Legends of Tomorrow delivered an entertaining, humourous and very clever midseason premiere this week, as the Legends rediscover Rip, and have to come to the aid of a filmmaking icon.
THE GOOD STUFF
2017-01-25
96%Overall Score
Reader Rating: (0 Votes)
0%