NOTE: This review may contain mild spoilers for the first ‘Part’ of, “Trollhunters.” That said, the review is written to accommodate those who have not yet watched the series, and as such, will avoid discussion of major plot developments.

Dreamworks Animation, despite mainly thriving in the big screen feature film space, has been pretty friendly with Netflix over the past few years. Various Netflix-exclusive offshoots to their movie franchises such as Shrek/Puss in Boots, Turbo and Madagascar have shown up on the streaming platform’s ‘Kids’ section, though more recently, Dreamworks Animation has moved beyond child audiences to also start crafting Netflix Original shows that appeal to adults as much as children. We first saw this with the likes of Voltron: Legendary Defender, and Dreamworks Animation has now teamed with Netflix for an even larger-scale and more ambitious offering, Trollhunters!

Trollhunters comes from the mind of Hollywood director and creature enthusiast, Guillermo del Toro, who originally conceived it as a book, co-written with Daniel Kraus. Only del Toro is involved with the Netflix show adaptation of Trollhunters however, where he serves as recurring writer, showrunner and lead producer, which marks a crescendo for a series of small collaborations and consultations that del Toro has done for several of Dreamworks Animation’s recent movies. Unlike the more traditionally-animated Voltron: Legendary Defender as well, Trollhunters is also animated entirely with movie-quality CG, making it essentially 26 twenty-minute episodes of feature film-quality Dreamworks Animation fun and adventure for audiences of all ages!

Adding even more weight to the project as well is that the lead character, titular ‘Trollhunter’, Jim Lake Junior, is voiced by the late Anton Yelchin, who tragically passed away last year after a freak car accident. Del Toro refused to scrap Yelchin’s voice work, which was fully completed mere days before Yelchin’s death, though should Trollhunters get a second season, or ‘Part’ as it were (which it seems very likely to get), Jim will have to be recast, as del Toro himself even admitted. It’s a shame too, because Yelchin’s portrayal of Jim is very appealing, balancing heroism with a wide-eyed sense of youth. In many ways, Jim feels like an old-school adolescent hero, without the sense of angst that often defines modern teenage protagonists, and that will likely feel like a breath of fresh air for adult viewers who wish that their younger fictional do-gooders would lighten up a bit.

Fortunately, Jim is also rounded off by a very enjoyable supporting cast, headlined by Kelsey Grammer as wise troll mentor, Blinky, who is there for Jim as soon as the Trollhunter Medallion appoints him the new Trollhunter. For reference, the Trollhunter is a warrior tasked with protecting the worlds of both humans and trolls, who secretly live in a hidden underground dimension. While the Trollhunter has always been a troll in the past, Jim marks the first time that the Trollhunter Medallion has passed the mantle on to a human. Naturally, Jim has an especially uphill battle ahead, as dark forces conspire to invade the worlds of both humans and trolls, starting with Bular, the villainous son of the evil troll king, with Bular voiced by del Toro regular, Ron Perlman.

Aside from Blinky, Jim also has two more human allies, in the form of Toby Domzalski, voiced by Charlie Saxton, and Claire Nunez, voiced by Lexi Medrano. Originally, only Toby is actively in on the Trollhunter business, being the first human friend that finds out about Jim’s new identity, though eventually, Jim’s crush, Claire also gets in on the fun. This might be a bit of a spoiler at first blush, but the show’s intro sequence (and most of its marketing), gives this away pretty fast by liberally showing Claire fighting alongside everyone else right from the get-go. Fortunately, both Toby and Claire are likable, steadfast allies, as is Blinky’s own troll best friend, Aaarrrgh!!!, voiced by Fred Tatasciore, an imposing, but innocent pacifist of few words who forges an especially powerful bond with Toby.

The superb character work is a huge part of what makes Trollhunters so heartfelt and lovable, but naturally, the spectacle and animation is also a big part of what makes this show such a success. The detail in the environments, the surprising flashiness behind the action, and the smoothness with which characters animate in all situations, make Trollhunters feel incredibly polished, without the apparent compromises that one would expect in a television show versus a movie. The troll designs are especially amazing, all of which have tons of care and creativity put into them. Every troll looks wonderfully distinct, and their designs manage to look and feel just as natural and believable as those of the human characters. This is especially important in regards to the Changelings, a breed of sub-trolls that are able to take the form of humans, which also assume the identities of certain folks in the protagonists’ lives as a means of further connecting the troll and human worlds. Unfortunately though, I can’t talk about the Changelings much, for want of avoiding spoilers. I will say however that they’re all enjoyable characters that can add humour, heart and menace exceptionally whenever the story calls for it.

There’s only one slight flaw to Trollhunters, which spans a staggering, but consistently enjoyable 26 episodes, much more than usual for a Netflix season! That flaw occasionally comes in with the storytelling. That’s not to say the storytelling is bad, quite the opposite in fact, especially since the majority of the episodes do have a lot of creativity, inspired twists, hilarious jokes and exciting thrills dotted throughout them. When taken as a complete package though, Trollhunters’ overall progression in its first batch of episodes is a bit predictable and familiar for a family-friendly fantasy show. As much as the majority of twists in the series are effective, there are some that are telegraphed in advance, especially when things threaten to become too dark, lest the show start challenging its Y7-rating. In fairness, it still does this at times, given some of the mild language and suggestive humour that pops up every now and again. This is Dreamworks Animation though, and if they’re following their movie template, as they evidently seem to be doing with the polish and style behind Trollhunters, you can bet that they’re going to slip a few risque lines into dialogue.

There’s a very clear reason why Trollhunters, unlike many of Dreamworks Animation’s prior Netflix shows beyond Voltron: Legendary Defender, isn’t restricted to the ‘Kids’ section, and is also prominently advertised all over the main adult page on the streaming service. Trollhunters marks the latest crown jewel in the modern cartoon renaissance, right up there with Adventure Time, Gravity Falls, Steven Universe and Dreamworks Animation’s own Voltron: Legendary Defender, being a kid-friendly series that is so well-made, so enjoyable and so smartly-written, that it’s equally recommendable to open-minded adults as much as children. In fact, if you have kids of your own, this is a great Netflix series to watch alongside them, especially with Trollhunters being surprisingly rich in smart morals and inspiring wisdom for both kids and adults, despite outwardly being a light-hearted CG fantasy show. 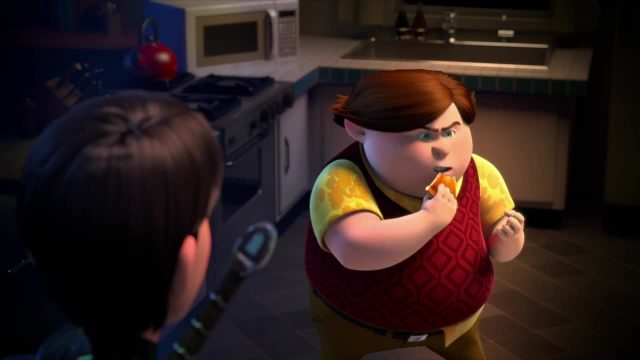 Most of all though, Trollhunters effortlessly stands among many of the finest Dreamworks Animation movies, being comparable to a small screen answer to How To Train Your Dragon in many ways. The animation even looks most similar to that sublime movie franchise, albeit now set in the modern era, rather than the distant past. Having to re-cast Yelchin for potential (and likely) future seasons will be a tough pill to swallow, but as Trollhunters ends its first 26 episodes with some fairly obvious sequel bait that immediately sets up a huge new storyline, your reaction will no doubt be excitement, rather than exasperation. Trollhunters’ world is so appealing, vast and extraordinarily detailed that you truly won’t want to leave after you’ve entered it. As with its human leads, you’ll find that there’s a lot to take in from the world of the trolls, but you’ll never want to stop adventuring with them!