Despite Lucifer taking a long hiatus until the start of this May, fans definitely shouldn’t be worried about the show’s future. FOX has announced tonight that they’ve already renewed Lucifer for a third season, well ahead of the Upfronts’ May deadline, with a fresh batch of 22 episodes officially coming towards the end of 2017, and continuing into 2018.

Issuing a statement on the renewal, FOX Entertainment president, David Madden praised the show’s cast and production efforts, claiming that the series just keeps getting better. On top of continued positive reception from critics and fans in its current second season as well, Lucifer remains one of FOX’s top current primetime drama programs in ratings, averaging about eight million viewers per episode. This also means that Lucifer happens to have one of the largest audiences for a comic book-inspired series on the air right now. 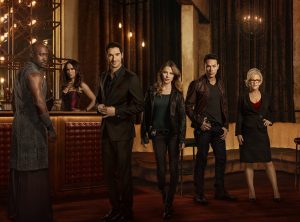 Lucifer is adapted from the Vertigo/DC Comics graphic novel of the same name, a spin-off series of comics derived from Neil Gaiman’s celebrated graphic novel series, Sandman. FOX’s television adaptation is rather loosely adapted from the comics, and has no real connection with Vertigo’s Sandman at this point, though it follows the same basic premise as the source comics, namely involving a fictionalized version of The Devil tiring of life in Hell, and subsequently fleeing to the human world to open a club called Lux in Los Angeles. In the case of the television show however, a procedural element is added that has Lucifer teaming up with original LAPD detective, Chloe Decker to solve crimes and punish evildoers around Los Angeles.

Lucifer is the fifth of nine current DC Comics-inspired primetime television shows to receive an advance renewal for next season, following The CW recently renewing Supergirl, The Flash, Arrow and Legends of Tomorow for new seasons in 2017-2018. FOX offers one other DC Comics-inspired show as part of their current primetime lineup, that being Batman prequel series, Gotham, though the future of that show hasn’t yet been decided by the network. Alongside Lucifer, two other shows inspired by graphic novels published under DC’s Vertigo imprint will also begin airing new seasons later in 2017, those being iZombie on The CW and Preacher on AMC. The remaining DC show is the recently-launched half-hour sitcom, Powerless on NBC, which has received lukewarm ratings and feedback so far.

Keep conjuring Eggplante for all major news and updates on Lucifer, and other DC Comics-inspired television projects.