When Microsoft announced Halo Wars 2 at Gamescom in 2015, we were more than a bit excited. Halo Wars was one of our favourite Xbox 360 games and an excellent example of how to create a real-time strategy game on consoles. The game, headed up by now-defunct Ensemble Studios, had some of the best looking cutscenes and audio in any game we’d ever seen at the time, and we’re glad to say that Halo Wars 2 does well to continue the legacy. But, does the rest of the sequel live up to the original title?

Halo Wars 2 opens similarly to Halo 4. The UNSC Spirit of Fire is adrift in space, its crew members in cryogenic sleep, its artificial intelligence Serina directing it to rearm and jump back into action, not unlike the Master Chief aboard the UNSC Forward Unto Dawn.

Graphically, the game isn’t quite a powerhouse, but it’s no slouch, either. Real-time strategy games have a tendency to look a bit toy-like simply based on their perspective. Halo Wars 2 does what it can to mitigate this with some unique environments and areas that aren’t typical of a space shooter. When was the last time you saw crystals emerging from the side of a cliff? Or

The base mechanics of Halo Wars 2 function quite similarly to the original game, and they still work. You ‘paint’ over your units to select them, or tap the bumper once or twice to select visible units or your entire roster, respectively. The similarities between the two games continue on far beyond unit selection, and this may not be the best thing for a game that’s eight years its junior. While the original game was quite innovative in control scheme, vehicles and structures, and overall level design, there’s just not that much that’s new in its follow-up. 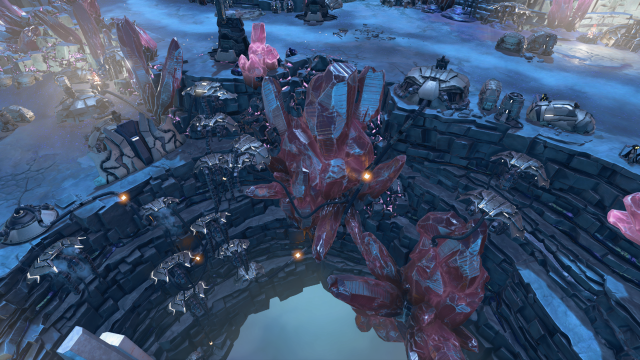 The base system is virtually identical to Halo Wars, the rotary control system for selecting unit and building upgrades hasn’t been changed at all, and while the user interface (and entire game, really) has been updated in visual fidelity, most elements are in the exact same places from one game to the next. It doesn’t feel like it’s been nearly a decade since the last game, but rather two or three years. And this experience certainly doesn’t feel like one for a new generation of consoles. Hell, even the voice saying “all units” and “local units” sounds the same, and the new AI, Isabel, functions with the same sass and attitude of Serina. It’s definitely witty and a lot of fun, but it isn’t original.

The core gameplay experience is a familiar one for real-time strategy players, and that’s certainly not a bad thing. The game is quite passable as an RTS on a console. Resource management is sprinkled in, but not overbearing, units are easy to differentiate on the battlefield, and upgrade trees are easy enough to understand. Gameplay is quite fluid, though there are a few framerate hiccups here and there (even in the menus, oddly enough), and it’s never boring or unbearable. With that said, however, Halo Wars 2 doesn’t offer anything overly exciting to the genre.

Gameplay is as one would expect without pushing any boundaries. You command a series of Spartan soldiers as they embark on a series of missions to take on Atriox, leader of The Banished, a series of Brutes that have defected from their legion. The game clearly sets up that Atriox is nearly impossible to beat after the Covenant was unable to wipe him out despite having a huge army. Somehow, though, Captain Cutter, heading up the UNSC Spirit of Fire which has been in operation for an entire half hour since emerging from cryo-sleep, is able to formulate a plan which will eventually bring Atriox to his demise. It’s just not believable, and that filters down to the rest of the experience because it just feels like there isn’t a point to anything you’r doing.

Luckily, the time between gameplay is phenomenal. Cutscenes are absolutely stunning, and there’s nothing that even comes close to the quality of the facial recognition and voice mapping used in Halo Wars 2. It is the closest we’ve ever seen to real people talking, ever. But what does it say about a game whose best moments lie in the time that the player is staring at the screen rather than controlling what’s on it?

Halo Wars 2 does a wonderful job of bringing players back to the Halo universe for a few hours while they await Halo 6. Multiplayer modes that mix card-based games that are all the rage with the Halo franchise will certainly help the game live on long after its six-to-eight hour campaign, however the game that came out eight years ago also delivered on the promise of a grand Halo RTS, and this title just doesn’t add enough new content to the table to make it exceptional the way it deserves to be. The way it should have been.

Halo Wars 2 Review
Halo Wars 2 is an excellent game in a vacuum where its original doesn't exist. However, seeing what was possible nearly ten years ago, it is clear that Halo Wars 2 doesn't deliver enough new content or innovation to live up to Ensemble Studios' original game in the series.
VISUALS72%
GAMEPLAY68%
AUDIO78%
STORYLINE60%
The Good Stuff
The Not-So-Good Stuff
2017-02-16
72%Overall Score
Reader Rating: (0 Votes)
0%