The LMD arc of Agents of S.H.I.E.L.D. is moving towards a climax, and the final pieces of that battle appear to have been laid in place in this week’s episode. “The Man Behind the Shield” excitingly upped the ante with the LMD issue, even if not every element of the resolution with the Watchdogs ended up being worth it in the end.

With much of this episode simply involving Coulson’s crew trying to rescue Mace and May, the events were occasionally intercut between present-day sequences and past flashbacks, with the flashbacks displaying how Coulson came into conflict with Ivanov, the so-called ‘Superior’ among the Watchdogs. Mostly though, they more often serve as a way to further develop the history between Coulson and May, namely in identifying that the two had considerable sexual tension even long before the events of this season. These flashbacks also gave a nice chance for Ming-Na Wen to return to the show, since the actual present-day May remains incapacitated in the Framework. 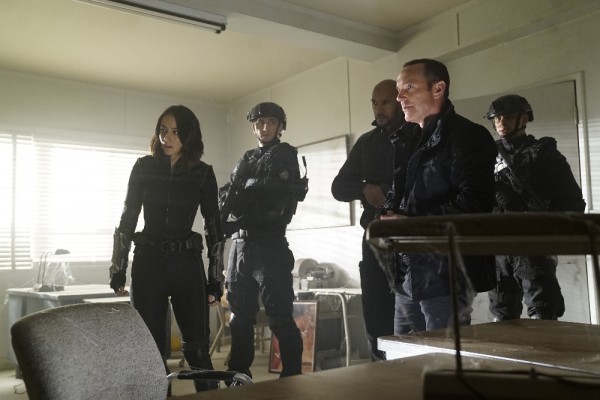 Speaking of the Framework, it becomes apparent in this episode that Radcliffe wasn’t the only person behind it. Turns out, the idea actually came from Fitz, who used it to expand upon existing training protocols for S.H.I.E.L.D. agents. Radcliffe twisting Fitz’s inventions to serve his own agenda was something that was very cleverly illustrated in this episode, as Mack berates Fitz for seemingly not considering the implications of the inventions that he creates. The subsequent scene whereupon Simmons consoles Fitz by showing how he can’t be evil by extension if an evil person perverts his ideas was also a very sweet one, and helped get Fitz back in the game so that he could help the team zero in on their captured comrades.

I have to say though that Ivanov really came apart as a villain here, sadly having a similarly disappointing endgame as Radcliffe, after his own plans were revealed in the previous episode. Rather than fully leaning into the belief that Coulson is some sort of alien mastermind, the show instead shoehorns this ham-fisted history between the two, which involved Ivanov’s fellow soldiers being killed for failing to neutralize Coulson and May many years ago in Russia, when S.H.I.E.L.D. tasked them with grabbing… something. Frustratingly, the episode never reveals what was so important, with Coulson even laughing it off as a joke in reference to how pathetic Ivanov’s agenda actually is. The thing is too, he’s right. Ivanov’s agenda with Coulson does end up being pretty lame. Despite some really strong Watchdog stories being gleaned from this season up to this point, it sucks that Ivanov was tripped up with such weak, unsatisfying motivations for going after Coulson.

Even Ivanov torturing Mace, seemingly for his misuse of the serum that gave him his super-strength, didn’t have the impact that it probably should have. The episode initially tries to set up Mace as being the victim of some twisted head games, with Ivanov trying to break his spirit as much as his body, though this idea never feels like it’s taken all the way. Mace is inevitably bailed out right when he’s ready to give up the ghost after a savage beating by Ivanov’s men, and like I said, we don’t even see May in the present day this week, yet again.

Fortunately, the episode’s climax is pretty entertaining, as Fitz and Simmons locate some server data that seemingly pinpoints where Mace and May are being held. Only Mace is present at Ivanov’s compound, but this still leads to some thrilling sequences, namely a pretty cool, if slightly brief fight between Ivanov and Daisy. Daisy dropping rubble on Ivanov and leaving him within an inch of his life was pretty cold for her standards, though it did lead to a great scene with Aida turning the tables on Ivanov and his insults, right before the episode’s epilogue.

Despite some of the failings of Ivanov’s last stand though, the setup for next week’s episode is definitely very exciting. There’s a clever clue dotted throughout the climax, namely that the series of events feels like it’s happening with a warped sense of time. This, paired with everyone conveniently finding each other right when it’s time to escape, when the compound is supposed to be an intricate labyrinth, has Fitz and Simmons becoming suspicious that something is up. When they look into it, they’re shocked to find that the LMD detector went off, and Coulson deleted the data. Since Simmons gets the security data forwarded to her private E-mail address, she’s shocked to see that Daisy, Mack, Mace and Coulson have all been replaced by LMD’s! This presents tons of promise for next week’s climactic LMD storyline, as Fitz and Simmons have to become the last line of defense for Coulson’s team, most of whom are now in Radcliffe’s and Aida’s custody.

“The Man Behind the Shield” was a pretty exciting episode that built up to next week’s climactic storyline rather well, even if Ivanov ultimately ended up being a disappointing foe for Coulson, one that was surprisingly easily taken out to boot. Did he seriously think he stood a chance in battle against a powerful Inhuman like Daisy? Be that as it may, the replacement of all of S.H.I.E.L.D.’s top agents with LMD’s, complete with the LMD Coulson rousing the LMD May again, definitely presents a great conflict for next week at the very least. The fun flashbacks with Coulson and May rounded off the episode nicely too, and seem to further hint that Coulson and May are going to become an item in the present sooner rather than later. That’s tomorrow’s issue though, now that S.H.I.E.L.D. is entirely being run by LMD’s, something that is likely a much larger priority!