Supergirl finally revisited Project Cadmus and the Luthor family this week, and it’s about time that the Luthor brood of the Supergirl universe started properly coming into their own. “Luthors” is an excellent episode that serves as one of Season Two’s best to date, one that finally does a proper job of cementing Lillian Luthor as a worthy foe, while also further developing the complicated legacy and reputation of Lena Luthor.

Right from the outset, this episode offers a very complex, intriguing and clever storyline, as the legacy of the Luthor family starts being peeled back, with a flashback that shows Lena first being adopted by patriarch, Lionel Luthor twenty years in the past. The Luthor family have consistently lent themselves to many rich and especially impactful Superman family stories in DC Comics lore, and this episode of Supergirl finally effectively translated that power and intrigue to this universe.

In the present, things begin with Lillian Luthor being put on trial for her crimes as the leader of Project Cadmus, which just so happens to come around the same time that her killer cyborg, Metallo is supplied some fresh Kryptonite so that he can break out of jail, and… Take the stand as a witness? Yeah, this is the one bit of the episode that was kind of weird, since no one in their right mind would admit Metallo to a courthouse, much less the witness stand! It’s kind of a nitpick, but what kind of testimony could Metallo possibly offer, especially when he inevitably ravages the courtroom and takes Lillian out once his testimony is done? Really? No one saw that coming? Not even Kara and Alex while they were right there in the gallery?

Regardless, evidence soon surfaces that seems to prove that Lena was the one who supplied Metallo with the fresh Kryptonite, which leads to Lena being arrested, and everyone declaring that they were right about not being able to trust a Luthor. Kara however, refuses to give up on her friend, and to the episode’s credit, it does remember to acknowledge Lena’s past heroic actions from earlier in the season, rather than just have everyone conveniently forget about them. Instead, Kara is cleverly overwhelmed by seemingly airtight evidence, even at CatCo, which once again puts her at odds with both James and Snapper when the magazine prints a scathing article about Lena’s alleged guilt. 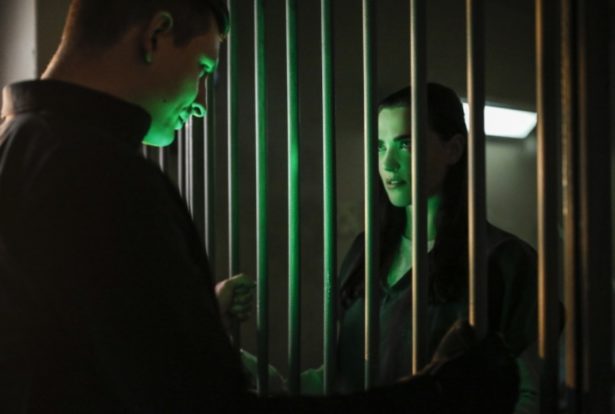 What also really worked well in regards to this storyline is how we see Lena becoming trapped by the Luthor legacy, even as she constantly makes an effort to rise above it. The revelation that Lena actually is a true-blooded Luthor, the product of an illegitimate affair between Lionel and Lena’s unidentified biological mother, is hardly surprising, but the complex way that this indiscretion affected the Luthor family as a whole was brilliantly realized. Lillian finally feels like a more interesting, even semi-sympathetic villain, as she had to watch Lionel become distant and forcibly keep Lena away, forcing Lillian to gravitate to Lex, where they presumably enabled each other’s anti-alien hysteria. Lillian truly does want to connect with her daughter, even breaking Lena out of jail to get her in on the family plan to keep Earth safe from apparent alien threats, and this finally gives Lillian the distinction and character depth that she desperately needed pre-arrest.

The trip to one of Lex’s hidden compounds also yields some neat nods to both Supergirl’s past, along with cool little nuggets from DC Comics history as well. Lex having collected the Atomic Axe from the pilot’s alien villain was interesting, and the glimpse at Lex’s familiar battle suit from DC Comics lore was definitely a thrilling Easter egg for DC fans. Even the use of sonic grenades to briefly disable Kara when she drops in feels like a clever nod to acclaimed DC graphic novel, The Dark Knight Returns, where Batman employed a similar assault on Superman as they fought. None of it plays into the climax, sadly which just has the real Hank Henshaw show up to bail Lillian out, while Supergirl, Martian Manhunter and Metallo have a little fight, but it doesn’t last long. Apparently, Metallo’s new Kryptonite heart is synthetic (wait, how did he change it over from prison then?), which means that the use of it is about to provide an imminent meltdown and nuclear explosion. Kara and J’onn manage to save Lena before Metallo explodes, with Metallo seemingly killed in the blast, though let’s face it, Metallo has survived and come back from worse fates in DC Comics lore. It’s unlikely that we’ll never see the character again on this show.

The tight, well-realized focus on the Luthor family, and the latest vindication of Lena, managed to carry the episode almost entirely on its own, and even then, there’s intrigue to ponder for later. A scene of Lena looking at a chessboard while reminiscing about chess games with Lex unmistakably seems to foreshadow that Lena could end up being the founder of black ops government organization, Checkmate from DC Comics lore. This would be a great way to keep viewers guessing about whether or not they can trust Lena going forward, even when she’s more than proven herself to be a good character now. There’s sort of a subplot with Kara and Mon-El, but it’s mostly pushed into the background, and is only briefly brought up in passing to set up next week’s belated Valentine’s Day episode, after Kara finally confesses her love for Mon-El right at the very end of this episode. Kooky Superman nemesis, Mr. Mxyzptlk showing up before they can kiss was definitely a fun way to end things, while nicely leading into next week’s episode that will see the villain’s proper introduction to the Supergirl universe.

“Luthors” offered a brilliant Luthor family-focused storyline that didn’t even need any subplots to bolster the episode. Lena’s latest struggle with her family legacy hit every correct note, and having Kara prove yet again that Lena is not like the rest of her family was incredibly satisfying. Lillian also finally became a much better villain for the show this week, and the fact that she’s in the wind with the real Hank Henshaw is now a lot more exciting than it would have been earlier in the season. It looks like Supergirl will be putting aside a lot of this potent drama for a more fun and upbeat episode next week, since that’s to be expected with a goofy baddie like Mr. Mxyzptlk, but for the first time, I’m actually really looking forward to Lillian Luthor’s next move. The clever foreshadowing of Lena being the founder of Checkmate in the Supergirl universe is even better, likely meaning that Kara’s friendship with Lena is about to truly be put to the test soon!

Supergirl 2.12: "Luthors" Review
Supergirl delivered one of the season's best episodes to date this week, adding all sorts of brilliant depth and intrigue to the Luthor family.
THE GOOD STUFF
THE NOT-SO-GOOD STUFF
2017-02-16
94%Overall Score
Reader Rating: (0 Votes)
0%