Legends of Tomorrow returned from its week off with a pretty enjoyable episode this week, even if it didn’t quite reach the spectacular high points of much of the show’s recent offerings. “Camelot/3000”, on top of being a very clever reference to an obscure DC Comics miniseries taking place outside of the superhero pantheon, offered a creative blend of time periods that made for a fairly thrilling next step in the race for the Spear of Destiny.

The episode begins with the turned Rip traveling to the year 3000, where Justice Society of America alum, Doctor Mid-Nite has somehow taken up residence as a scientific researcher. After killing Mid-Nite and taking away his piece of the Spear, Rip leaves the Legends to find the horrific scene after they arrive too late, being as confused as any viewer about why a Justice Society member has ended up over a thousand years in his future. 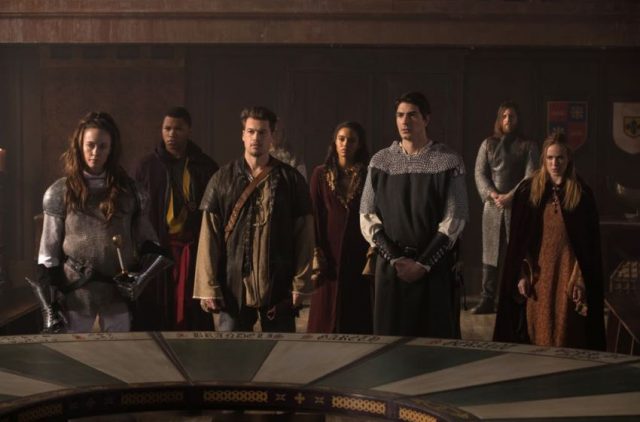 There’s no time to ponder however, since the next Spear piece is located in Camelot within the 6th Century, which has both Ray and Nate overjoyed to explore a particularly beloved time period. To Nate’s surprise however, 6th-Century Camelot is nothing like how history documented it, instead being more along the lines of the outlandish legends that a socially awkward Ray grew up on during his earlier years. The team is further shocked to discover that the ‘Merlin’ of Arthurian legend also happens to be none other than Stargirl, yet another missing Justice Society member that is really in the wrong time period.

The revelation of Stargirl in the past lent itself to a really cool idea for a revised, extra fantastical take on a historical Camelot. Turns out, before he was turned and had his memory erased, Rip rallied the Justice Society to separate the pieces of the Spear of Destiny, after the Legion of Doom first begins to seek them out. Not only were the pieces scattered, but they were also moved across several time periods, with Justice Society members assigned to guard each of them, hence the sudden disappearance of all but Amaya, Hourman and Obsidian. This not only explains why the Justice Society disappeared in that mysterious mission alluded to by Obsidian several episodes back, but also explains why Doctor Mid-Nite, and now Stargirl, are in the wrong time periods. 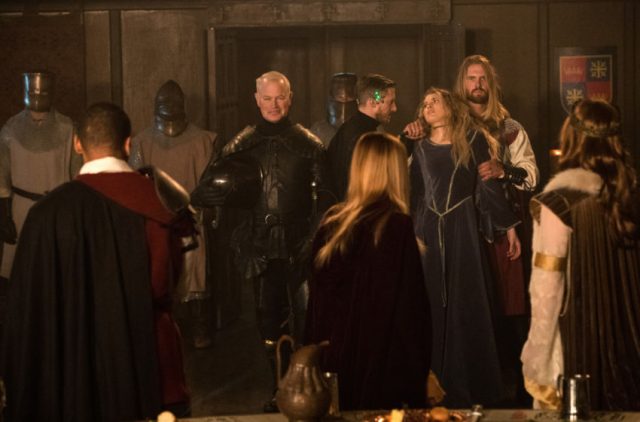 With the Legends having located the latest piece of the Spear of Destiny however, Damien Darhk and Rip are naturally also closing in on it, with Darhk outed as the mysterious Black Knight, King Arthur’s own arch-nemesis. This situation doesn’t seem too unmanageable for an entire army in King Arthur’s court, except that the Legion doesn’t play by the rules, and stole a piece of mind-controlling technology from 3000 that allows them to enslave Arthur, kill Galahad, and build an army of mind-controlled knights. With this attack, Darhk gives an ultimatum; Surrender the missing piece of the Spear of Destiny by dawn, or witness the entire destruction of Camelot.

This is the turning point of the episode, when the story really kicks into high gear. It also does so to mostly good effect, even if there are a few stumbles along the way. Stargirl using the Spear piece to seemingly re-fashion Camelot to be in line with the idealistic legends is a neat idea, as is Amaya going against her former partner to use the Longinus Medallion and steal the Spear piece from Arthur’s Excalibur sword, entrenched in stone again, naturally. It seems like there’s going to be a big conflict from this, but surprisingly, Stargirl surrenders the Spear piece unrealistically easily, especially since she’s apparently in love with King Arthur, which comes out of nowhere, especially since Arthur is already married to Guinevere. This is heavily glossed over, because Stargirl’s storyline clearly didn’t have enough room to breathe in a pretty busy episode. Likewise, Queen Guinevere being teased as a lesbian, or at least bisexual, and having an attraction to Sara, was something that also came out of nowhere, and didn’t feel like it was properly developed. 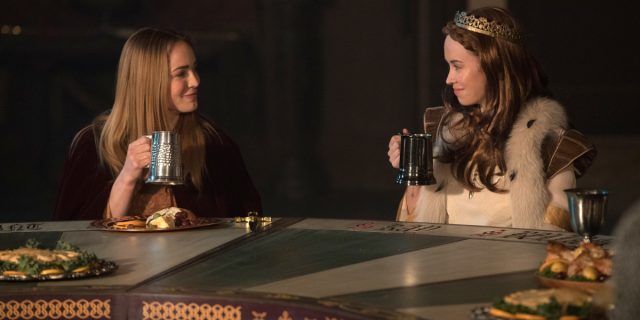 Fortunately, another better story element was Martin also bending the rules, stealing a piece of the future tech from 3000, and bringing it onto the Waverider, which just so happens to be related to the mind-controlling technology that the Legion of Doom is wielding this week. This reckless act by Martin impresses Mick, which gets on the nerves of Martin, especially when Jefferson expresses disdain at Martin’s destructive scientific curiosity. The idea of Martin and Jefferson struggling to work the technology properly with Martin’s mind is also interesting, just as it’s surprisingly satisfying to have intensity be the true trigger of the device, which means that the unintelligent and tormented Mick is actually the person to wield it best. This provided a surprisingly decent excuse to hack and short out Rip’s mind control over the knights, thus saving the day in the pretty action-packed climax, while also allowing the team to capture Rip and keep him captive in the Waverider, just as Darhk flees.

Sadly, another weaker story element that didn’t work as well was Ray wanting to throw his life away for the sole purpose of fighting alongside King Arthur’s knights. There was just never a logical reason for Ray to want to make that kind of sacrifice. The idea of the team debating having to leave one of their own behind to get the Spear away from the Legion of Doom is a potentially great, incredibly dramatic idea, but it’s hurt by Ray’s reasoning for staying behind being, frankly, pretty stupid and childish. Likewise, it just as much comes out of nowhere when Ray suddenly doesn’t care about his revised Arthurian legacy when Nate offers to show him how he’s remembered in the future. The episode just didn’t convey either side of Ray’s thinking here, as if he was supposed to be the anchor for a good drama idea that just didn’t get the development it deserved. 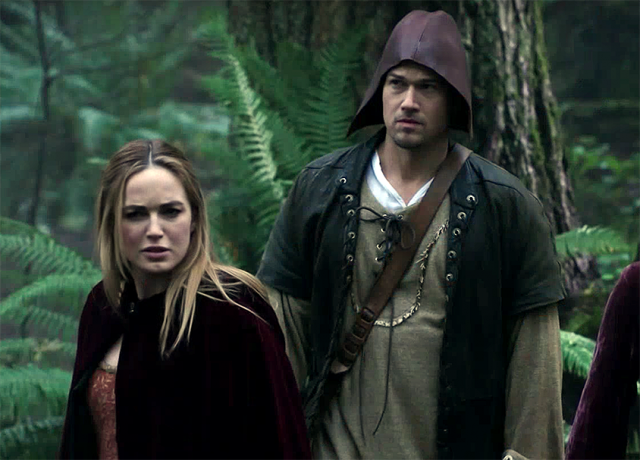 The excitement of the episode, especially its battle-heavy climax, is easy to enjoy though, and despite its handful of story failings, “Camelot/3000” was still a good episode of Legends of Tomorrow. Despite spending very little time in the year 3000, the future technology blended with the Arthurian fantasy to great effect, especially in the action scenes. Likewise, while Ray and Stargirl felt like their story arcs suffered from being under-cooked, Mick finding his latest unexpected excuse to save the day was great, as was our first real taste of the kind of reality-bending that the Spear of Destiny is theoretically capable of. Legends of Tomorrow is taking another week off next week, and will return in March, though with Rip revealed to still have control of Gideon from his prison cell, it looks like the Legends’ small victory might soon turn into a pretty big problem!

Legends of Tomorrow 2.12: "Camelot/3000" Review
Legends of Tomorrow blended two highly separate time periods in an interesting and mostly good episode this week, even if it did suffer some story stumbles.
THE GOOD STUFF
THE NOT-SO-GOOD STUFF
2017-02-22
82%Overall Score
Reader Rating: (0 Votes)
0%