The climax of the mostly superb ‘LMD’ arc of Agents of S.H.I.E.L.D. finally arrived this week, and it definitely did a fantastic job of sending this current story arc for the show out with a bang. “Self Control” is the first episode to be directly helmed by showrunner, Jed Whedon, making it twice the monumental milestone for Agents of S.H.I.E.L.D, which is why it’s all the better that it’s one of the season’s best episodes yet, perfectly leading into the next exciting story arc, and presumably the final one, for Season Four.

Things immediately kick off on an exciting note after last week’s cliffhanger, with Fitz and Simmons realizing that four of their S.H.I.E.L.D. teammates have all been replaced with LMD’s. This has them trying to escape detection and working to survive, though when they find their way into the basement workshop, another sensor tips them off that either Fitz or Simmons is an LMD themselves! This results in a truly excellent and highly dramatic scene, one that both Iain De Castecker and Elizabeth Henstridge just nailed in every respect, as the two start distrusting each other, while also pleading the case that they’re not LMD’s. Fitz even dropping the bomb that he’s thought about marrying Simmons was especially emotional… If also a bit of a giveaway about which one of these two is real.

Yes, Fitz is the LMD, which is discovered after Simmons makes him cut his wrist, only for Simmons to then be thrown into getting stabbed in the leg and knocked out so that Fitz can map her brain. This was a brilliant curveball, since the image of Daisy, Coulson, Mace and Mack all coming into the base with the notification that four LMD’s had infiltrated wouldn’t have viewers imagining that Fitz or Simmons could be one of the fakes. This was a very unexpected way to leave Simmons in an even more vulnerable spot, while also leading into the immediate speculation that one of the four agents that came into the base is actually not an LMD, and is in just as much danger as Simmons right now!

A quick flash back to Radcliffe’s Framework server, which also showcases a grisly scene of Aida taking apart Ivanov for some unknown means, soon reveals who is the other real agent, as Daisy is missing from the row of captured S.H.I.E.L.D. operatives. Thus, Daisy is still the real deal, and Simmons’ best hope for surviving the horror that’s beginning to overtake the S.H.I.E.L.D. base. We don’t immediately touch on that though, as Aida also pulls Radcliffe out of the Framework, to confess that her programming is at odds with itself. Aida has discovered that Radcliffe is the greatest threat to the Framework, which she must protect, but she must also protect Radcliffe at all costs. Aida directly pointing out that Radcliffe has poor self control, and could one day come to regret his creation, was a great way to reconcile Radcliffe’s big heel turn at the start of the LMD arc, but what was even better was how Aida solved the problem! After Aida suddenly comes to a realization of how she can appease her programming, she slits Radcliffe’s wrists and hooks him up to the Framework, permanently! Yes, Radcliffe is dead, even if it doesn’t mean much right now, since his mind is technically still thriving in his virtual world.

Once Simmons and Daisy make contact with each other, after Daisy discovers a whole horde of copies of herself in the basement during an LMD operation to lure Inhumans to S.H.I.E.L.D. and kill them, and after Daisy uses her abilities to prove that both she and Simmons are undeniably their normal human selves, the two have to formulate a plan to escape the LMD replacements of Coulson, May, Mack and Mace. This made for a terrifically exciting climax for the episode and the story arc, one that expertly blended a sense of horror and twisted vulnerability with a potent sense of action, thrills and suspense. The two using sleeping gas to knock out the real, living agents, and immediately prove who is a person and who is a robot across the base, was very inspired, just as Daisy having to fight off the LMD Mace single-handedly, before being shot twice by the LMD Mack and Coulson, was incredibly intense.

The subsequent scene of Daisy using her powers to obliterate the mechanical skull of the LMD Mack, and disable the LMD Coulson enough to get away, was awesome, as was the two running into the LMD May guarding their exit with a detonator and a bunch of explosive barrels. This looked like a no-win situation, but the group managing to talk their way past the fake May by appealing to her sense of uncertainty was also very smart, and made for a really explosive and dramatic destruction for the other LMD’s. After Coulson tries to explain his love and need for May using false memories, the LMD May detonates the barrels, not only destroying all of the fake LMD agents, but also seemingly destroying the entire HQ! This once again wonderfully places S.H.I.E.L.D. on the ropes for the rest of the season, in a way that really makes sense, and feels well-earned, given how intense and deadly the LMD program ended up becoming for the Marvel Cinematic Universe at this point. 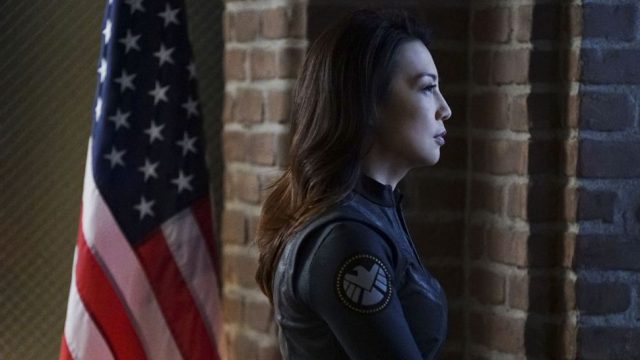 As I said, the show also exceptionally sets up for the next major story arc, as Daisy and Simmons have no choice but to hijack the Framework signal and insert themselves into their avatars, in order to make contact with their people and get everybody back to reality through a backdoor. The two can’t be pulled out, even if their vitals are going haywire, and if they stay in the Framework for too long, their bodies will give out to boot. It’s another dangerous situation, and one that sets up all sorts of bizarre alternate-reality scenarios. When Daisy wakes up in a warm bath for example, she’s shocked to discover that she’s sleeping with a very-much-alive Grant Ward! Coulson, meanwhile, is teaching as an Inhuman professor, Mack appears to be living a peaceful life, Fitz appears to be some sort of rich businessman on the arm of an unknown woman, and Simmons is dead! Boy, that really makes you wonder exactly where Simmons woke up, eh? May is perhaps the biggest bomb of the virtual bunch though, as she’s happily working in the restored Triskelion building, just as it stood in Captain America: The Winter Soldier!… Except for that big HYDRA logo on it anyway. Is May a HYDRA agent in the Framework?!

There’s obviously a lot to get excited about with the next major story arc for Agents of S.H.I.E.L.D., which is teasingly called ‘Agents of HYDRA’, but we’ll have to wait a while to see what’s next. Agents of S.H.I.E.L.D. won’t be back until the start of April, meaning that it’s not only sitting out next week, but also the entire month of March. The pain of that long wait is perhaps the biggest testament to the show hitting such a high point though, especially in the all-around excellent conclusion to the LMD arc this week. “Self Control” was a nigh-on-flawless episode of Agents of S.H.I.E.L.D., one that was packed with suspense, intensity and a whole lot of memorable moments. The LMD scourge was really pushed to new heights here, to the point where it kind of sucks that it’s seemingly over now, but Aida is still very much a clear and present danger too. Aida re-tooling Ivanov into the perfect cyborg, an LMD body controlled by Ivanov’s still-living head (which has been severed from his actual body!), also presents some horrifying promise for a big Season Four climax later this Spring, even if we’re going to be having quite a bit of bizarre fun in the Framework before that danger starts coming out.