After its early stumbles, Powerless showed more signs of starting to hit its stride in last week’s episode, “Sinking Day”, and fortunately, that higher quality continued into this week’s offering. “Emily Dates a Henchman” is pretty self-explanatory with its core storyline, as Emily is pressured into the dating world, only to find out that her new beau isn’t exactly who she thought he was.

Oddly, NBC originally seemed to advertise this episode as the second episode and Valentine’s Day-themed episode of Powerless, seemingly meant to air a couple of weeks ago, only to have this episode inexplicably replaced with the considerably inferior, “Wayne Dream Team” in the eleventh hour. This might be NBC wanting to perhaps get their other duffer episode out of the way early, since they know that most frequent watchers of NBC sitcoms are fully aware that the network’s ensemble comedies don’t take off right away, giving them something of a grace period to find a more consistently reliable selection of good Powerless episodes to found the rest of Season One.

Whatever the case, the idea of Emily dating a henchman, with henchmen apparently very often frequenting Charm City, is something with a lot of potential, especially for revisiting Charm City’s high henchman population down the line. Better still is that Emily’s new henchman boyfriend is played by iZombie’s Robert Buckley, who believably sells the character of a charming underling that successfully convinces Emily he’s a doctor, when in reality, he’s hired muscle for well-known Batman nemesis, The Riddler.

Speaking of Batman, he also got plenty of focus in the episode’s subplot, which involves Teddy and Ron discovering a Batarang stuck underneath a Wayne Security vault door that Two-Face obliterated in Gotham City, shortly before being captured by Batman. After the two start messing with the Batarang, they get the attention of Van, who puts them all up to meeting Batman, namely because Van wants to bill Batman for a car mirror that the Batmobile smashed back in 2003. 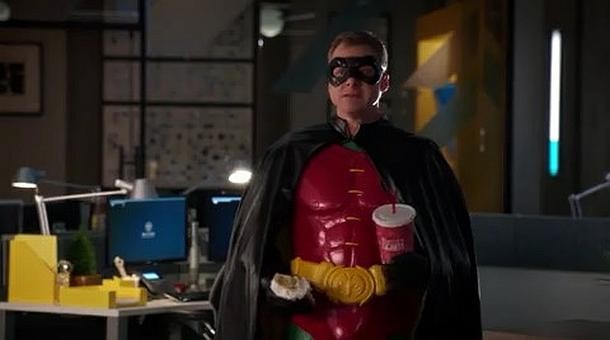 Both storylines in this episode were generally done well, even if the subplot had a few more laughs by a small margin. A lot of this is due to the growing dynamic between Danny Pudi and Ron Funches, with Alan Tudyk once again also flexing his comedic muscle as one of this show’s big humour standouts. The referencing of Batman frequently taking out car mirrors with the Batmobile across various Batman shows and movies from DC’s past is pretty clever, as is Van pointing out that Batman always comes back for his spare Batarangs, since he doesn’t want the technology falling into the wrong hands. This also nicely contrasted with the Riddler henchmen in the main storyline with Emily, even if it’s a bit disappointing that there wasn’t ultimately much of a way to unite the Batman and Riddler-themed conflicts.

Still, Vanessa Hudgens was pretty funny as a lovestruck Emily, and played well off of a more cynical Christina Kirk, who surprisingly turns out to be the voice of reason when the Wayne Security employees immediately figure out that Emily’s new boyfriend is a henchman. Even funnier is Emily obliviously showing off the new super-durable Wayne Security phone cases to the henchman, which inspires The Riddler to have his henchmen break into the building to steal the cases and make a tank with which to invade Arkham Asylum. It’s an amusing idea, even if the show does seem to write itself into a corner after Emily and Jackie are captured, with the Riddler henchmen about to toss them into the river. The idea that they’d honestly think Van is Robin and immediately scatter, after Van hoped to pitch himself as a new Robin successor to Batman, is too far-fetched, even by the standards of this show.

The final resolution of Teddy, Ron and Van ‘meeting’ Batman after he gets their wallets back from a mugging (as in, not noticing that he took the Batarang away and replaced it with their wallets), made for an amusing ending gag, one that played off of an otherwise strange repeating of the word, “Obviously” between the employees, after the three men tell a clearly fake rendition of the story to Emily and Jackie. All in all, this was another fun and reasonably satisfying episode of Powerless, and the show continues to better develop its ensemble and storytelling balance here. The peek into Emily’s love life and Van’s unwitting past connection to Batman worked well, and even if there wasn’t ultimately that much real development to Emily’s henchman boyfriend, it was still pretty amusing to see just how much of a henchman problem Charm City seemingly has!

Powerless 1.4: "Emily Dates a Henchman" Review
Powerless continued to build a pretty healthy momentum this week, as Emily dates a Riddler henchman, and Teddy, Ron and Van get their chance to meet the Caped Crusader.
THE GOOD STUFF
THE NOT-SO-GOOD STUFF
2017-02-24
80%Overall Score
Reader Rating: (1 Vote)
88%