NOTE: Full spoilers for this episode of, “Arrow”, including the true identity of Prometheus, are present in this review

After a bit of a speed bump in last week’s rather disappointing episode, Arrow finally, mercifully, at last returned to the Prometheus storyline in a big way this week. Not only that, but the highly dramatic storytelling led to one of this season’s best episodes to date, as, “Fighting Fire with Fire” finally unmasks this season’s big arch-villain, while also putting Oliver through the public ringer, as he’s faced with impeachment, after covering up the circumstances behind Billy Malone’s death in the midseason finale.

The fact that Oliver never once donned his Green Arrow identity in this episode (at least outside of the flashbacks), made for an especially strong focus on Oliver’s public persona, rather than his vigilante alter-ego. This was a brilliant chance to highlight how much Oliver’s public identity as mayor is just as important as his Green Arrow identity in the ongoing battle against Prometheus, since surrendering the mayors’ office proves that Prometheus is right, and that Oliver can’t truly save Star City. The fact that there were no under-handed dealings from the investigating side was all the better, since Oliver has to face up to what he did, rather than just find another conspiracy to undo him.

Another reason why this conflict really shone was the continued degradation of Thea’s moral fiber as well. Thea is now thoroughly living up to the Merlyn name in office, doing whatever it takes to protect Oliver’s reputation and job as mayor. Thea going as far as to show no remorse for blackmailing the swing vote councilor, an innocent man, especially demonstrated just how corrupt she’s become after discrediting Susan, and Oliver having to fight against those kinds of dirty politics made for a very inspired way to test and validate his desire to be a hero, not even as the Green Arrow, but simply as Oliver Queen.

Things get even more complicated when Vigilante returns and targets Oliver as well, nearly killing him in his limo, before being driven off by the combined efforts of Oliver, Thea and Dinah, right before the police show up. Oliver gets lucky with Vigilante, though this doesn’t stop Vigilante from preparing another assassination attempt, when Oliver finally decides to do what he has to do to restore the city’s faith in him; Call a press conference to own up to what he did to Billy, and go even further than that to boot, namely by labeling the Green Arrow as a menace that must be brought to justice. Well, at least this was a slightly better excuse to demonize Oliver’s Green Arrow identity this week, rather than just finding another flimsy excuse to have some other corrupt force sic the SCPD on him for the umpteenth time.

Another particularly strong point of this episode is that it finally, irreversibly solidifies the usefulness and competence of Oliver’s team, even when he’s not there to lead them. Seeing Curtis finally successfully develop his T-Spheres, key gadgets that his DC Comics inspiration uses as Mister Terrific, made for a very satisfying evolution of Curtis’ character, just as the team managing to stop Vigilante from assassinating Oliver, without assistance from the Green Arrow, finally perfectly had them coming into their own as an independent unit of heroes. This victory had Curtis in particular more confident and assured than ever, which is why it was truly heartbreaking to have Curtis finally get a chance to try and reconcile with Paul, only to have Paul serve him divorce papers. Curtis has been through a lot this season, and it’s effectively cruel to have the last shred of his former life come apart, right as the final essential phase of his evolution into Mister Terrific has come to pass.

As much as a big step was taken with Curtis’ character regarding his DC connection though, there was also another huge deviation from DC Comics lore in this episode, to balance things out. This came when the identity of Prometheus is finally revealed, after he warns Vigilante that Oliver Queen is his target, and Vigilante needs to back off. After a brief scrap, Prometheus finally removes his hood and mask, and calls in a sighting of Vigilante to the ACU, revealing him as none other than… Adrian Chase! Yes, Chase was Prometheus the whole time, which was confirmed by the showrunners, and by actor, Josh Segarra, immediately after this episode aired. It’s not a trick.

Obviously, this brings up a few questions, especially since Chase is actually one of the men that dons the Vigilante mantle in DC Comics lore (this twist fooled a lot of DC fans, myself included!), now begging the question as to who the Vigilante of the DC Television Universe is. The reveal of Chase as Prometheus is something that does make sense for the most part though, and explains how information was so easily leaked out of the mayor’s office and the ACU, along with the red herring that Prometheus was thought to be an SCPD officer. The only drawback here is that I wish the Prometheus reveal wasn’t awkwardly crowbarred into the middle of the episode, where it felt a bit awkward and random. It would have been more dramatic and effective to have Prometheus unmask himself as Chase when he approaches Susan at the end of the episode, seemingly ready to kidnap her in his latest move against Oliver. The way it was done though simply has Chase carrying on as normal in the episode, while the other characters are oblivious to his identity. Yes, it’s been that way all season, but it was a bit of an odd time for viewers to find out the truth, considering that Vigilante played such a big part in this episode, with Prometheus not actually being featured beyond that one scene.

As for this week’s flashbacks, they were alright, even if they were predictably overshadowed by the especially dramatic present day events. The flashbacks basically entail how Oliver and Anatoli survive their attack by Gregor, with Anatoli invoking a right to be tried and have his fate decided by the other Bratva captains. After Oliver uses his Hood persona to grab information that incriminates Gregor taking bribes from Kovar, a gunfight erupts, and that’s where the flashbacks end off this week. It’s another straightforward set of flashbacks, but at least they were clever and exciting, and even injected some surprising levity into an otherwise highly dramatic and serious episode. 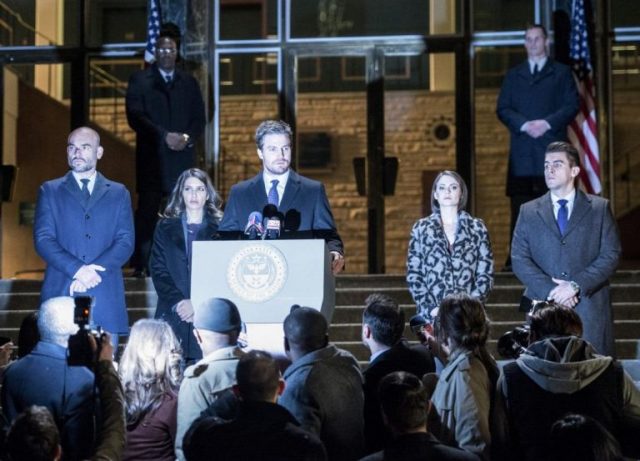 Arrow made a lot of bold moves this week, between unmasking Prometheus, proving that the team can function well without Oliver’s leadership, having Paul go all the way and divorce Curtis after Curtis perfects his T-Spheres, having Felicity fully join Helix, and finally, having Thea realize what she’s becoming and resign from Oliver’s staff. Oliver isn’t impeached in the end, which is good, because that would be one shake-up too many, even if the cost of losing Thea still left a sting amid this supposed victory. Between all of the shake-ups that did happen though, Arrow once again hit an incredible renewed stride, with all of the drama, action and suspense being almost perfectly on point throughout this episode. The show is taking a week off next week, giving fans some extra time to simmer on the implications of Chase being Prometheus, but now that us viewers at least know who is behind the mask, we’ll hopefully have some time to enjoy the dramatic irony, before Chase shows Oliver who he truly is.

Arrow 5.15: "Fighting Fire with Fire" Review
Arrow excelled with one of this season's best episodes yet this week, as Prometheus is finally unmasked, and Oliver faces impeachment.
THE GOOD STUFF
THE NOT-SO-GOOD STUFF
2017-03-02
93%Overall Score
Reader Rating: (0 Votes)
0%