NOTE: Some mild spoilers for the second season of, “Love” may be present in this review. That said, the review is written to accommodate those who have not yet seen the season, and as such, will avoid discussion of major plot developments.

Despite 2016 being a rather rough year for original comedy shows on Netflix, there was at least one standout in Judd Apatow’s and Paul Rust’s Love, a dramedy series that took an uncompromising look at modern adult dating. The show’s first season definitely appeared to slant more towards drama over comedy though, despite still being well-made and enjoyable.

The newly-launched second season of Love, by contrast, is more refined and funny, without skimping on the emotion or the drama that also defined the first season so well. The show is still very dependent on you having a particular taste for awkward, dysfunctional humour in Season Two, but if you already enjoy Love, you’re probably going to enjoy the second season even more, which feels superior in pretty much every respect! 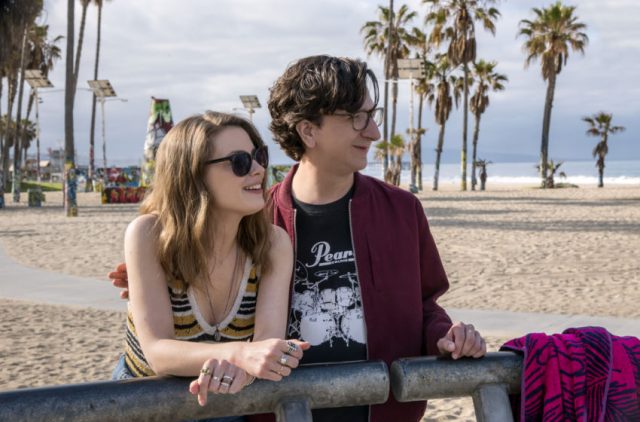 When the first season of Love ended, Gillian Jacobs’ Mickey Dobbs had finally come clean to Paul Rust’s Gus Cruikshank that she is an addict, being both an alcoholic and a nymphomaniac. Gus appeared to forgive Mickey for her actions and not want to drop their budding romance, but Mickey also declared that, as a necessary part of her path to self-improvement, she wishes to swear off dating and relationships for at least a year. As a result, much of the second season centers around Mickey trying to overcome her addiction, while also trying to sustain a friendship and inevitable casual relationship with Gus.

Obviously, Mickey’s and Gus’s efforts to keep things casual don’t last for very long, which isn’t truly a spoiler, as the show’s attachment to romantic dysfunction has always been one of its defining traits. Love continues to make the case that dysfunctional romantic relationships are becoming the majority of relationships in the modern era, but it does so with a slightly more optimistic take than it had in Season One. This makes Season Two more enjoyable to watch, so long as you can stand the frequently uncomfortable jokes, since both Gus and Mickey are significantly more likable in this second season, Mickey especially.

Mickey’s character arc in Season Two is arguably one of the strongest elements of these twelve new episodes, extended slightly over Season One’s ten-episode length. Now in AA and SLAA, Mickey must come to grips with what drives her addictions, while also trying not to ‘ruin’ Gus in the process. Gus certainly isn’t the perfect person either, even in Season Two, where he continues to work on fictional trashy teen fantasy show, Witchita, with his outburst from the end of Season One seemingly all but forgotten about in Season Two, miraculously. Maybe the writers ran into a wall when it came to trying to take Gus away from Witchita, but keeping him there was probably the right call anyway, since Season Two would have become spread thin if it had to simultaneously deal with Mickey’s addictions and Gus being out of work, while also having to keep building on their offbeat relationship at the same time.

Mickey’s Australian roommate, Bertie also remains a key part of the show in Season Two, with Claudia O’Doherty remaining another standout in the lead cast, alongside Rust and Jacobs. In Season Two, Bertie has begun to settle into a dysfunctional relationship of her own, as she begins hooking up with Gus’s pathologically lazy friend, Randy, providing an alternate take on potentially toxic partnerships. Bertie is outwardly much more together than Mickey, and even Gus, but pairing her up with the unrepentant, apathetic mess of Randy is a surprisingly effective source of twisted laughs. Bertie may be a bit more visibly on the sidelines in Season Two, but she still keeps the show fun and light-hearted, and prevents it from becoming too depressing whenever Gus’s and Mickey’s relationship starts inevitably becoming difficult again. 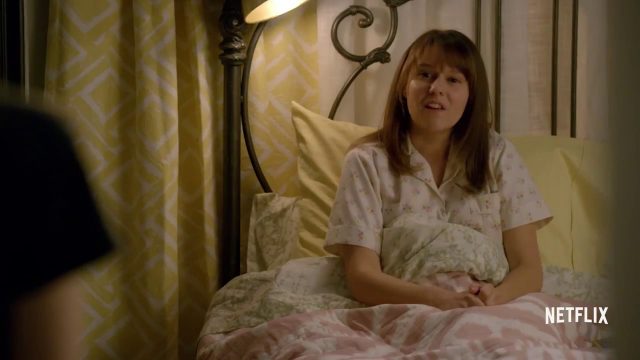 Naturally, Love remains exceptionally written in Season Two overall, and the better balance between comedy and drama has the show continuing to move forward on a nice uptick. The pacing of the season is also especially smooth and satisfying, which is great, considering that it’s slightly longer than the first season. About the worst that one can say about the second season of Love in fact is noting the rare instances when some developments with Mickey’s and Gus’s relationship are a bit laboured, sometimes straining just a bit to cause drama. We’re well aware of the fact that Mickey and Gus are both emotionally unhealthy people by this point though, so some dysfunction is to be expected, mind you. It’s also not very often that you’ll be taken out of the story and reminded that you’re watching a TV show, even if those immersion-breaking story hiccups are noticeable in a couple of instances.

Considering that Love was given an automatic two-season pick-up by Netflix, it’s great to see that this strong dramedy series is only getting better in its second season. This also makes it especially exciting that Love has already been renewed in advance for a third season, presumably to premiere in 2018, as Season Two ends on just the right note of satisfaction and uncertainty for Gus and Mickey. It’s a little easier to root for the leads actually being together in Season Two, after Season One almost seemed to make viewers want them to stay far away from each other due to their lightning rod-level dysfunction, and that definitely helps Love’s longevity as a Netflix show. The show is still very much an anti-romantic comedy in a lot of ways, so you have to be actively open to the deconstructing and blunt butchering of adult relationships once again, though if that’s acceptable to you, Mickey and Gus remain two star-crossed lovers that are constantly compelling in all of their perpetually messy glory.