Adrian Chase was revealed as Prometheus in the previous episode of Arrow, and this week, Oliver and the rest of his crew also find out the horrible truth, leaving all of the cards on the table for both the good guys and the bad guys. “Checkmate” had Prometheus’ plans finally reaching their next legitimate phase, which was highly satisfying, considering that the arch-villain has spent so much of this season’s back half in the background, barely doing anything.

This wasn’t a perfect episode, mind you, since a few unearthed elements of Prometheus’ agenda and backstory did turn out to be a little underwhelming, but at least we weren’t wanting for excitement this week. This is true right from the start of the episode as well, since things begin with Oliver taking a trip to a remote mountain monastery (seemingly a loose reference to 2005 DC movie, Batman Begins), which turns out to be a secret hideaway for Talia Al Ghul. It’s here that Oliver learns that Talia is the daughter of Ra’s Al Ghul (he somehow didn’t know that before?), and that Talia trained Prometheus. Talia is even kind enough to spill the beans on who Prometheus actually is to boot, confirming that he’s been Chase this whole time. 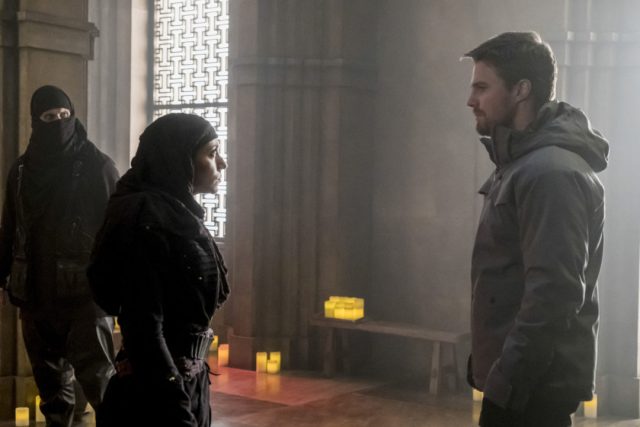 With Prometheus’ identity revealed, Oliver storms into the mayors’ office to give away that he knows Chase’s secret, and after a heated confrontation in a parking garage soon afterward, Chase manages to get away, after revealing that he did indeed kidnap Susan at the end of the previous episode. With Susan’s life in the balance, Team Arrow has to try and discern her location, while also frantically trying to stay ahead of Prometheus, who, as usual, seems to have planned every move out to a superhuman tee.

The mind games of Prometheus continue to really delight here, and seeing the character proudly hide in plain sight, being completely untouchable all the while, was very effectively dramatic. Despite Team Arrow’s attempts to intimidate Chase, Chase knows that they can’t do anything, and this gave the villain a great air of menace. One of the highlight scenes of the episode in fact comes after Oliver breaks into Chase’s house and only finds his wife, narrowly escaping an attack by the SCPD, which forces him to declare a ‘shoot on sight’ order for the Green Arrow to the public, right next to Chase, during a mayoral press release.

The hunt for Susan, and Oliver being pushed to a new emotional limit, was definitely realized very well, though all the while, we also had to deal with a Felicity subplot that was mostly good, but doesn’t go anywhere of note for now. Felicity is continuing to make use of Helix resources, which has Helix gradually demanding more and more action from her on the part of unknown hacktivist motives. Oliver and the rest of the team are noticeably concerned, but for now, Felicity just keeps digging herself in deeper with Helix, and not much else happens. The prospect of Felicity wanting to do good, but becoming irreparably in debt to some bad people (considering that Helix is a super-villain organization in DC Comics lore), is a promising one, but we’re not seeing this story arc yield any real fruit yet.

Similarly, Talia actively going along with Prometheus, suddenly wanting revenge for the death of Ra’s Al Ghul at the end of Season Three, despite being completely estranged from him, does feel a little contrived. Talia’s return in the present-day events did at least play well with the flashbacks, where we see Talia’s ‘teachings’ starting to corrupt Oliver and making him more aggressive as The Hood, but for now, we don’t have enough development with her character to make her masterminding of Prometheus have that much dramatic weight. Maybe Talia has other motives for helping Chase in his deranged quest to psychologically torture Oliver, but for now, her logical connection to Prometheus feels a bit tenuous. How would Chase even know of her existence anyway? Moreover, how would he find her with no training and likely limited resources?

Speaking of the flashbacks, they continue to mostly spin their wheels and procrastinate with the Kovar material once again. We at least get lots of intense action in the flashbacks, something that this episode in general wasn’t really wanting for, but that’s about all they’re good for here. Anatoli sees his first glimpse of Oliver as The Hood, and the surviving Bratva agents corner Gregor and his goons at a hockey game, seemingly killing all of them, and that’s the end of it. Hopefully, this means that the show is going back to Kovar in the past, since we haven’t properly checked in with the flashbacks’ big villain in a while, with Gregor definitely outliving his usefulness as an antagonist by this point.

The excitement and action really was tops on Arrow this week though. The episode built up to a strong climax, where Team Arrow goes to retrieve Susan from an abandoned building that Felicity locates with the help of Helix, having to dodge Prometheus’ tricks and traps. Oliver does manage to find Susan, and even has Diggle bring Chase’s wife to try and bring him to his senses, though this definitely doesn’t go as planned, especially when Chase stabs his own wife so that she doesn’t blab his Prometheus identity to the police, in a nicely shocking twist! After a brutally awesome and intense fight with Adrian that happens afterward, Talia disables Oliver, and Oliver is captured, while Chase’s wife dies on the way to the hospital. Chase using his wife’s death as leverage to tighten the screws on Oliver’s public identity as mayor even further was a fantastic way to highlight just how much of a sociopath he truly is, and Oliver being imprisoned by Chase and Talia, as Chase vows to help Oliver discover who he truly is, was a pretty solid way to end things off before next week’s episode.

There were a few story stumbles with Prometheus’ official unmasking and amped-up machinations, but the villain himself does continue to be effective, and didn’t lose any appeal after Team Arrow learned who was really under that mask. Talia suddenly being a major villain feels a little forced for now, and the flashbacks continue to annoy with their continued disconnect from the Kovar conflict that they were supposed to be initially built around this season, but at least Prometheus is still well on his way to being this show’s best arch-villain since Deathstroke. Hopefully, Felicity getting deeper in debt to Helix also starts paying off in a bigger way soon as well. With Oliver in the villains’ custody, Felicity will probably have no choice but to make her biggest ask yet of her hacker friends next week, and who knows what that deal with the devil will lead to in the weeks to come!

Arrow 5.16: "Checkmate" Review
Despite a handful of story hiccups, Prometheus' proper unmasking founded a pretty exciting episode of Arrow this week, even if the flashbacks are still spinning their wheels.
THE GOOD STUFF
THE NOT-SO-GOOD STUFF
2017-03-16
81%Overall Score
Reader Rating: (0 Votes)
0%