The Walking Dead is still trudging along at a snail’s pace this week, trying as much as it can to drag out events before the inevitable confrontation between Alexandria and the Saviors. “The Other Side” mostly centered around more tired, uninteresting politics at The Hilltop, though did at least offer some more interesting subplots with a Daryl/Maggie combination and Sasha/Rosita combination, even if their payoffs were a lot better than most of their progression.

Things begin with the Saviors paying another visit to The Hilltop, in what’s admittedly a pretty fitting result of Negan’s act of brutality from a few episodes ago, where he threw Sanctuary’s only doctor into an active oven for allegedly setting his favourite wife loose. Since Sanctuary needs another doctor, Simon and his men have come to take The Hilltop’s only doctor, and as expected, Gregory doesn’t put up a real fight over this. He at least briefly protests, but that’s about it.

Steven Ogg continues to be a pretty entertaining presence on this show as Simon, and he at least helped to slightly elevate a very plodding storyline that was otherwise very dull to sit through. Gregory’s spinelessness has gotten pretty old at this point, and watching him cower before Simon and the rest of the Saviors is very tedious now. The moment of Gregory trying to switch up his favourite drink to tequila to try and impress Simon was kind of funny, and his threat of directly siccing the Saviors on Jesus if he steps out of line was also pretty chilling, but beyond that, Gregory continued to exist as nothing more than a waste of space, one that will inevitably be overthrown before long, I imagine.

While the Saviors are stomping around The Hilltop, Sasha and Rosita break off to go about their mission to kill Negan, which serves as one of the other major storylines of the episode. While this is going on, Daryl is tasked with protecting Maggie, bringing her into a cellar, while Enid tries to keep the Saviors’ focus away from said cellar. Enid’s efforts don’t manage to work, but fortunately, the Savior nearby merely goes in to steal some fruit, and doesn’t notice Daryl or Maggie hiding near him. This doesn’t stop Daryl from trying to give the guy a likely well-deserved knife in the back though, before Maggie stops him.

Maggie exercising restraint is pretty surprising, considering that she was among the Alexandrians that suffered the most with Negan’s killings at the start of the season, but it led to a pretty solid character moment for both her and Daryl. After Maggie points out that Daryl won’t acknowledge her, Daryl eventually breaks down in tears, apologizing profusely, and admitting that he couldn’t face Maggie after his actions led to Glenn’s death. This was a very nice moment of vulnerability for Daryl, especially since he has actually had some half-decent storylines this season, for the first time in a while. Seeing his feelings finally come to the surface in regards to Glenn’s death was pretty satisfying. Maggie forgiving Daryl and saying that Glenn’s death isn’t his fault was also a heartwarming moment, allowing these two to nicely clear the air as the battle with Negan keeps drawing ever closer.

That just leaves Sasha and Rosita, who spend most of the episode walking towards Sanctuary after briefly (too briefly) training some citizens at The Hilltop, mostly bickering along the way. These two clearly don’t get along, at least for now, and Rosita makes it pretty clear that she has no interest in being friends either. Despite that, the two women manage to find a way to work well enough together, and seeing their perfectly synchronized actions with wandering Walkers does make them nonetheless come off as a good team, one that the show really should have made better use of in times past. Still, a lot of this storyline was boring filler material, with both Sasha and Rosita re-treading the same tired emotions and bitterness that they’ve mostly been dealing with all season, when we actually see them anyway. 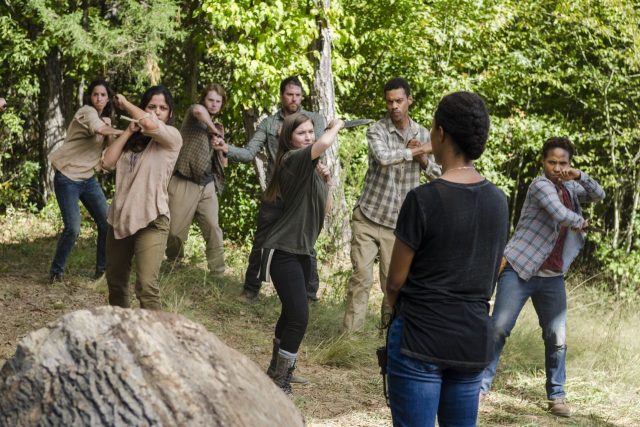 When the two finally reach a vantage point where they can try to snipe Negan however, they talk through more of their issues while being forced to wait for Negan to surface, and this allows them to grow closer. Little things like Rosita confessing some of her backstory, before teaching Sasha how to tie new knots, and both women discussing their pain over losing Abraham at the start of the season, were all pretty decent character moments that, like the moment with Maggie and Daryl, helped to clear the air as the season approaches its climax. It was also decently dramatic to have Rosita discover Eugene appearing to order around the Saviors in a position of authority, but nonetheless decide to break him out.

Any ambiguity with Eugene is pretty decisively cleared up in the episode’s final minutes too. Unlike in the source comics, where Eugene hates the Saviors and plans to betray them during this storyline, the Eugene of the TV series says that he doesn’t want to leave the Saviors, and warns Sasha and Rosita to leave before the Saviors find them. Looks like the Alexandrians have truly lost Eugene, but that wasn’t even the most dramatic part, as Sasha takes the lead when going to invade Sanctuary, only to shut Rosita outside of the locked fence, saying that it’s not her time to make a sacrifice. This is a bit predictable, since, as I’ve said in previous reviews, Sasha is pretty obviously marked for death at this point, considering that Sonequa Martin-Green is now playing the lead role in CBS’ upcoming Star Trek: Discovery, meaning that her character can’t also be a lead on The Walking Dead. Either next week or the week after, it seems pretty much certain that Sasha is not going to survive the season.

The episode ends with Rosita being observed by a shadowy figure, possibly alerting the Saviors to her presence, though with Daryl asking at The Hilltop where Sasha and Rosita went mere moments beforehand, it could just as easily be him, or possibly Dwight, who looks like he’s planning to betray the Saviors anyway. We might be swapping Eugene for Dwight in that case, but I guess we find out in one of the season’s two remaining episodes. Once again, “The Other Side” mostly existed as a slow-moving lead-in to the season finale at the start of April, having some admittedly decent payoffs at the end, though to get there, we still had to trudge through a lot of tired, boring filler material. Already, it feels like The Walking Dead is tipping its hand pretty heavily as to what’s going to happen before Season Seven has concluded, but hopefully, we can at least get through these last couple of episodes with some decent surprises and thrills.

The Walking Dead 7.14: "The Other Side" Review
The Walking Dead once again plodded along with another sluggish lead-in to the season's climax this week, though at least had some decent character moments.
THE GOOD STUFF
THE NOT-SO-GOOD STUFF
2017-03-20
74%Overall Score
Reader Rating: (0 Votes)
0%