After taking several weeks off, Superstore finally returned this week with, “Integrity Award”, a decent episode that fell noticeably beneath the show’s usual sublime level of quality. A disappointing payoff and execution of a couple of subplots dragged down the episode, despite fairly solid humour all around, and an enjoyable Jonah/Amy plot that managed to elevate the episode a bit more than the rest.

Things properly kick off with the announcement of a Cloud 9 Integrity Award, which Glenn is desperate to go after, anticipating a hearty buffet lunch that comes with it. The employees initially seem to be recommending Glenn for the award just fine, but after Garrett rescues a veteran’s lost dog, earning him extensive praise from the Cloud 9 workforce, Glenn starts relying on increasingly underhanded means to keep the award in his grasp, and not have the employees consider Garrett instead.

There were at least enough decently funny jokes in this storyline, especially when we see Glenn go darker and more shady than he’s ever gone before. Overall though, this was probably the storyline that had the most disappointing execution and payoff, which is a shame, since this is the plot that’s referenced in the episode’s title. After Garrett starts going after the award himself upon being annoyed at Glenn’s lies and treachery, the two men simply break down and cry together, admitting that they both repress their feelings too much. Wait, what? That wasn’t what this storyline was supposed to be about. The irony of Glenn being dishonest to win an integrity award is referenced at least once by Cheyenne (nicely highlighting how idiotic this idea truly is), but the story simply peters out with an entirely disconnected conclusion, to the point where we don’t even know if Glenn or Garrett won the award. Well, what was the point of all of this nonsense then?

Another major plot in the episode had Dina trying to exploit Mateo’s relationship with Jeff to get favours done around the store. Jeff refuses Mateo’s initial request to help Dina fumigate the break room and kill cockroaches though, not wanting to display special treatment. Thus, Mateo tries to do the job himself, somehow fooling Dina into thinking he’s an everyday exterminator, and fills the break room with ten industrial-sized bug bombs, which gradually flood their poison deeper into the store.

At the very least, this was a funny payoff, and Dina’s outlandish requests to Mateo, and equally outlandish advice for repaying him with sexual favours, provided a lot of strong laughs. Even the conclusion of the bug bombs driving everyone out of the store and requiring Poison Control to come and decontaminate everyone was pretty amusing. The sudden revelation that Jeff has to force Mateo to transfer to another Cloud 9 branch felt somewhat anti-climactic though. Surely, he wouldn’t be going far, and not only that, but this is one of the points where the show taking place in a minimum-wage environment somewhat works against it. When employees were transferred in, say, The Office, that was a big deal, since it was a proper nine-to-five job, and often entailed employees moving to entirely different cities. For all we know, Mateo is going to another Cloud 9 branch down the block, even if it remains to be seen whether this transfer will stick, or whether we’ll see Mateo again at any regular rate if it does.

Fortunately, the Amy/Jonah storyline, like I said, excelled a bit more. This involves Jonah going to Amy’s childhood home to help her parents move out, since they have to be out by the end of the day. Jonah, however, quickly becomes distracted by the humourous history of Amy’s childhood, in turn bonding with her parents over embarrassing Amy as much as possible. The reveal that Amy’s parents are gradually more lazy and underhanded than Amy initially let on was unveiled at a great slow burn pace too, as Jonah is forced to buy terrible art from her father, and her mother starts procrastinating by cooking twelve-hour tamales. 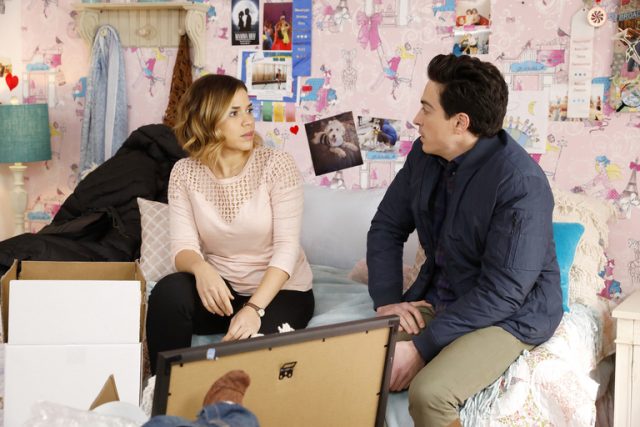 This storyline easily had the strongest end result, as Amy finally comes apart at being unable to help her parents move out. Jonah however convinces her to just let her parents clean up their own mess, since they’re adults, and Amy can’t always be worried about coming to everyone else’s aid all the time. This was actually a pretty uplifting tease of what a Jonah/Amy relationship would function as, and Amy conspicuously denying a call from her husband to keep hanging out with Jonah in the moving truck was another great hint that this is where things are heading. The two coming onto the scene of the bug-bombed store soon afterward, and deciding that the grown-ups there can clean up their own mess too before they drive away, was a pretty hilarious way to cap off the episode as well. I’m not sure how Jonah blatantly got away with flat out skipping out on his shift early, but maybe Glenn and Dina were too distracted with their own selfishness to notice or care.

The several weeks off does seem to have disturbed Superstore’s momentum a bit in its latest episode, but, “Integrity Award” was still a pretty funny episode at least, despite some of the lacklustre story payoffs. Mateo having to transfer to a different store didn’t really hit with that much weight in the end, especially when it may not even stick, but the chance to meet Amy’s immature parents was definitely very satisfying. I really wish that more could have been done with the promising idea of Glenn lying and cheating to get an integrity award, especially since Garrett’s general apathy about his work could have been a bit better exploited. Still, with Mateo leaving the store, hopefully this leads to tighter storytelling in next week’s episode.